So what is time? A measure of man’s experience? A slice of eternity? Atlantis has held Man’s imagination for millennia and would probably continue for as long as Man in his present form continues to wonder and explore.

But the True Man will meet up with the Atlantean prince on a different plain and he will understand the meaning of that smile. The Atlantean was the eternal guard against the enthusiast like Nick who searches for knowledge without considering the dangers of the many tunnels he leads man into. He ceases to exist when he finds himself by default in the middle of the library of All Knowledge and he ceases to be. He becomes one with the knowledge and is lost within it, losing persona. He enters into Time. 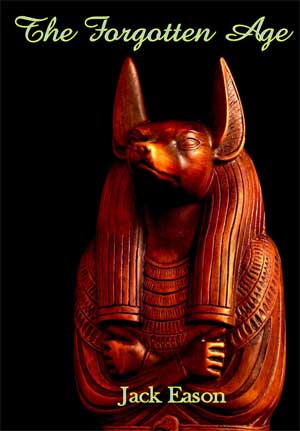 Phew! Jack, those words held me spellbound for the time it took for me to read The Forgotten Age. I must congratulate you for a beautifully crafted story. I could not sleep until I had read and finished the reading the story. It chased my dreams and tantalized me with images and longings to have a final answer on Atlantis for it will open the door for me to peep into the dawn of the age of Homo Sapiens, on this almost timeless Earth. Infinity has her door firmly shut.

I am happy I was given an opportunity to read Jack Eason’s book The Forgotten Age. I am a simple elderly lady and as the clock ticks relentlessly bringing me into reconciliation with my origin and starting point I wish to commend Jack for this story. He has written a story that I found very appealing. It was not science fiction nor did I have to contend with strange human beings.. Ithis stayed well in the background. I had no reason to be worried that the awful fellow from his historical fantasies were about to gobble up my dreams. I was just teased about a past that Jack held up to me as a tantalizing future.

A concept was thus confirmed, Man can only understand his future when he returns to his past. The beginning always flows into the end or vice versa. Infinity is thus defined and explained and it becomes a journey a lot of us will find very difficult to make.It is the only way Life can be explained and the rationale of Man’s journey here on Terra Firma.