Interview with Susan Surman (Dancing at all the Weddings) 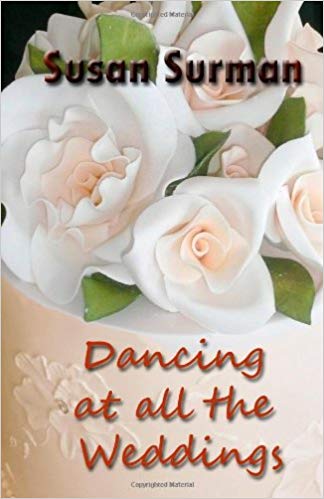 Susan Surman: Vivacious and talented Elaine Richman is faced with choices: A risky life in the New York theatre; an exciting life with college sweetheart, actor/director Jake Applebaum in Hollywood; a secure life in Boston with predictable lawyer David Alter, the match anointed by her domineering mother because ‘he’s the kind you marry.’ On the way to a dream, it is possible to collide with another dream’s seduction, only to learn there is no fulfillment on the path to safety. Elaine goes through the wringer to meet herself, proving there is no expiration date on talent or true love.

Pat Bertram: How long had the idea been developing before you wrote it?

Susan Surman: I had an idea for a short story – this was maybe 4 years before I expanded it –

The character was the same but had a different name, etc. Title: Where in the World is Mary Reynolds? I invited an audience to reading to get some feedback. There were 35 people there at Altair Casting Agency Studio in Winston-Salem. I knew it was the germ for something more which had to be developed. That story actually is in the book – it covers several chapters.

Pat Bertram: Why this particular story?

Susan Surman: Ernest Hemingway said you must write what is burning up inside. I knew the theatre from the inside; I had been writing novellas; it was time to write a full-length novel. I had so much to put into this book from personal experiences. (Only the names have been changed to protect the innocence, as the saying goes)

Pat Bertram: How much of you is hidden in the characters?

Susan Surman: For those people who know me well, not so hidden. It’s the same with all my writing. I have no imagination. Why invent when all I have to do is remember? Born in Boston, I moved to London, then Sydney, as an actress and writer as Susan Kramer or Gracie Luck. I traveled the world, returned to the US – what I’ve done really with all my books is a fictionalized fact.

Pat Bertram: How long did it take to write Dancing at all the Weddings?

Susan Surman: This particular book took about 2 years – I kept expanding. And it just wasn’t finished until it was finished. I had to let it go. That’s it. You just have to let all these people you’ve invented go out and live their own lives by getting out there……

Pat Bertram: What did you do for research?

Susan Surman: I use a lot of the places I’ve been, but to be sure I had updated information, I had to research – online; magazines; talking to people. For example, I don’t know anything about small private aircraft, so I found the person online who owns and sells what I was writing about. We communicated and I had my answers. Mostly, I was really writing what I knew about and one of the main male characters is based solely on a real person. Perhaps the novel depicts the way I would have liked it to turn out with him. That’s why it’s called ‘romance.’ It can be anything you like. Romance, I mean.

Pat Bertram: What was your technique to stay on track and develop your story?

Susan Surman: It was very hard to keep track of the ages. I’d never done anything like this before. One year was usually my time frame. This book spans 28 years. I had to go back to the 1970s. I kept lots and lots of notes. As maths isn’t my strong suit, it wasn’t easy figuring out their ages at any given time, but I did it. I worked backward with ages and found it the best way to do it. I went over and over it.

Pat Bertram: Since writing your first book, what has changed?

Now I’m introduced as the author or the writer – I guess with the fifth novel coming out, you earn the title. I like that. People treat you differently when they hear you are a writer. It was like being an actress in Europe. You get to the head of the line in restaurants. That type of thing. A little side story about Sacha. He was my dog in London. When I left, I had to leave him. My friend happened to be the florist to the Royal family. She would take Sacha with her.

One day the Queen Mother looked out the Palace window, saw the dog in the van and told my friend to bring him in. And that’s where Sacha spent his mornings for a long time. I wrote to Queen Elizabeth that I would be in London (2004) and would like to deliver a copy of the book. It was affirmed I was to enter by the side of Buckingham Palace via the staff entrance. A few weeks later, I got a letter thanking me for the book and saying Her Majesty was most interested in the inspiration for the book about my little dog.

Pat Bertram: What is the most difficult part of the writing process?

Susan Surman: The idea. Coming up with the idea. Then the doing of it. Finding the word; then finding the exact word to describe what you mean. Writing is an intellectual prison. I’ll do anything NOT to do it; then once I begin, I can’t do anything else. When in the creative mode of the work, I say ‘no’ to a lot of social invitations. This is very hard because I’m basically a gregarious person.

Susan Surman: Sometimes; usually not. But you keep going. It has to become an obsession. You become addicted to your own words. And it flows.

Pat Bertram: Where do you keep future ideas? Computer? Notebooks? Pieces of paper?

Susan Surman: I’ve lots of notebooks with ideas. Big notebooks; little notebooks. And scraps of paper. Will I ever get to them? Who knows? Maybe just one sentence from something looms, and I’ll use it, once I can find it.

Pat Bertram: What is the best writing advice you ever got?

Susan Surman: Stop writing on your Brother Electronic typewriter and buy a computer. The best writing advice was from the author and screenwriter, Joe Schrank. When I first started writing or rather ‘thinking’ I was going to write, I didn’t really know how to do it. He told me because he liked the title: “If you don’t do something with it, I’m going to do it.” I didn’t like that, so I got busy. He also said, “Put aside 2 hours a day to start. That’s all. Clear everything off the desk, and just do it.” I did. By the way, the title rarely came first after that time. Usually, there’s a provisional title and then after the work is finished or nearly finished, the real title comes to me.

Pat Bertram: What is the first story you remember writing?

Susan Surman: I remember the first story – I was 13; 1953. I don’t remember what grade I was in. I still have it. I got an A-minus. “The Will to Dance.” I don’t know where it came from because it’s about a ballet dancer. I’m not a ballet dancer. Anyway, I actually used it in my Sacha book! So nothing is wasted.

Pat Bertram: What other books have you written?

Susan Surman: Max and Sacha, of course, and The Australian Featherweight; The Noble Thing. Plays: George; In Between.

Pat Bertram: What last words would you leave?

Susan Surman: I think you mean literally the last words and not the last words of this interview. In my book, Dancing at all the Weddings, my main character is at her mother’s side as she is dying. Mother’s last words to her daughter: “If you use a public toilet, remember to hover.” My last words will be: Stay curious.

Anonymous Jan 26, 2021 3
The Book Doctor In my search for the people and the knowledge to help me further my writing skill, I have found…
Book Review