How long had the idea of your book been developing before you began to write the story?
I worked on the idea for Donations to Clarity for about two or three years. My original intention was to write a very different book which included more mythical creatures, such as the Loch Ness Monster, but when I sat down to write the book, the Bigfoot story took over. Instead of resisting the idea, I just went with where the characters took me. 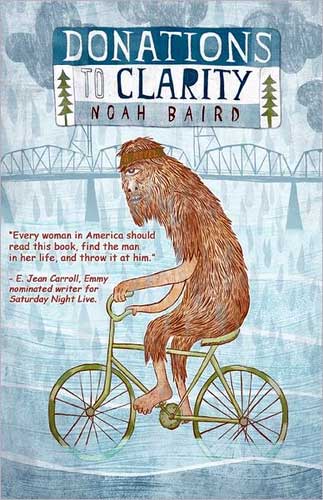 What inspired you to write this particular story?
This is an interesting question because I’m really not sure. I was fascinated with Bigfoot when I was younger. The town I grew up in had several Bigfoot sightings, so I think those stories fueled my curiosity at a young age. Part of the Bigfoot legend has always been the idea it was a hoax. Some of the evidence is obviously hoaxed. I’m not sure about all of it, but there are certainly Bigfoot hoaxers out there. It was the hoaxing which really drew my attention – who would do something like that and why? Then I wondered: if Bigfoot exists, what does it think of these people hoaxing Bigfoot? The novel grew from that question.

How much of yourself is hidden in the characters in the book?
I’m not really sure. I suppose there are bits and pieces of me in all of the characters.

Who was your favorite character?
Bigfoot was really fun to write. It took a long time for me to decide on what type of character he should be. I wanted to stay away from the typical scary-creature-in-the-woods Bigfoot. I also thought Bigfoot would be a great vehicle for looking at our world through different eyes. The interesting thing that happened when I started writing him was this misogynist pig came out. I went back through what I wrote, and I thought it was really funny. It was great to be able to shut off the filters and write from the reptile side of the brain.

How much of a story do you have in mind before you start writing it?
Very little – I start with an idea and go. I read somewhere Tom Robbins purposely writes himself into a plot corner just to see if he can get himself out of it. I found the idea – that writing didn’t have to have a regimented approach but could be a game for the writer – really attractive. So, I sat down with the idea ‘What would Bigfoot think if he saw a Bigfoot hoaxer?’, and I went from there.

What challenges did you face as you wrote this book?
I didn’t have people around who supported my writing. They weren’t taking it as seriously as I was. As an unpublished writer, it was difficult to convince them this was something I needed to do. It was also hard to know if the writing or the story was good. It takes a great deal of faith in yourself and the story to see it all of the ways through.

What was the first story you remember writing?
I didn’t start off writing stories, but jokes. I really wanted to be a stand-up comedian. I studied comedy extensively and trained myself to see the joke in everyday things. I was a horrible stand-up comedian. I didn’t like speaking in front of a crowd, but my joke writing wasn’t bad. It occurred to me I could write some very funny jokes – I just couldn’t tell them. In some ways, jokes are micro-novels; they follow similar trajectories, timing, etc. Some of the chapters in the book follow the framework of joke writing.

What writer influenced you the most?
I picked up Still Life with Woodpecker by Tom Robbins when I was about 21. It was the book which really spoke to me. I’d always enjoyed reading, but it was the first book I felt like it was written to me. I loved Steinbeck, Twain, etc, but they were from another generation. Woodpecker was the literary equivalent of hearing Nirvana’s Smells Like Teen Spirit or Don McLean’s American Pie for the first time. I felt like someone else out there saw the world as I did. Christopher Moore, Tim Dorsey, and Carl Hiaasen are larger influences on me now, but Tom Robbins was the first to knock me down the rabbit hole.

Did you do any research for the book? If so, how did you do it?
I read probably a dozen books on Bigfoot and hoaxing Bigfoot. I don’t think I ended up using anything from the research. I tend to b.s. my way through with just enough facts to make it seem plausible.

Is there a message in your writing you want readers to grasp?
Absolutely not. I write sitcom literature. It’s mental fast food. I just wanted to write an enjoyable story.

Do you think writing this book changed your life? How so?
I think people thought I was pretty weird before the book. They still think I’m weird, but I think I get a pass now because I’m a writer.

What one book, written by someone else, do you wish you’d written yourself?
Mark Twain’s The Diaries of Adam and Eve. It is the funniest, most honest analysis of the complicated relationships between men and women I’ve ever read.