Admit it. We all want to be lied to. Why else do we keep voting for presidents who are known liars? Why else do we ask: “Do these pants make me look fat?” We want the pretty lies, but we want those lies told in such a way that we believe they are the truth. And perhaps in the believing, they become the truth.

But what if you want to know if a person is lying? Pay attention to body language. The body doesn’t lie.

Lies are easiest to detect in small children. As we get older, our gestures become more subtle, but for one who is looking, those subtle gestures can tell as much as the child’s guilty face and unpracticed falsehoods. 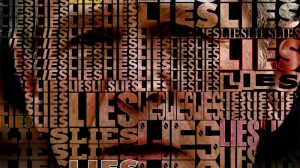 When a child lies, he covers his mouth with his hands in the classic speak-no-evil gesture. The teenager brings a hand to his mouth and lets his fingers rub lightly around it. An adult brings a hand to his mouth but pulls it away, or he lightly touches a finger to his mouth or nose. And his nose grows longer. (I’m being facetious. Although the nose does continue to grow throughout a person’s life, it probably doesn’t have anything to do with the lies he tells. There’s no way of proving this one way or the other, of course. Since everyone tells lies, if only of the white variety, there is no control group.)

Rubbing an eye is another indication of lying. This see-no-evil gesture is the brain’s way of blocking out the deceit. Men rub vigorously, and women touch gently beneath the eye, but it comes down to the same thing. Sometimes a liar will tug at an ear, scratch his neck, pull at his collar, put fingers in his mouth, blink more than normal. Men and women both swallow more when they are lying, but this is usually noticed only in men because of the bobbing Adam’s apple.

Both men and women tend to look away when they are lying. Looking a person in the eye while lying does fool many of us, since we see that as a sign of openness and interest.

Closed palms is also an indication of deceipt. If a person shows his palms, he is showing you that he has nothing to hide. But a practiced liar will show his palms and look you right in the eyes.

Taken individually, each of these gestures can mean something else, something innocent. For example, rubbing the eyes and putting the hands up to the mouth are classic signs of sleepiness, and the thing the person is deceiving you about is the state of their restfulness. The eye rub can also be a sign that dust got in the speaker’s eye, so this sign along with all signs of lying must be seen in conjunction with other gestures.

A Work in Progress – Review

Pat Bertram Feb 28, 2013 1
Here are some responses from other authors about how their environment colors their writing. The comments are taken…
Publishing