As the children left the classroom for the last time that year and threaded their way down the hilly trail, their tiny teacher watched them go with a hint of melancholy. The gnomish woman was nothing special to look at.

Her hair was a plain brown and simply styled. Her eyes were an equally plain brown and hidden behind reading spectacles. Her clothes were conservatively cut and offered nothing in the way of colour, all neutral, natural shades.

With a sigh, she stepped away from the door.

Another of the teachers approached her, a little man with stiff greying hair and friendly eyes.

“So I hear you may be leaving us? Your last year? You’re a little young to be retiring, aren’t you Cerissa?”

“It hasn’t been confirmed yet, Mortimer, but the winds of change may be blowing. Not retirement, but possibly a different career path,” she informed him, gathering the papers from her desk. 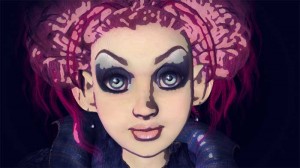 Her colleague smirked. “Do tell, do tell. What sort of leap were you looking at making? You’ve been a school-teacher all of your life, have you not? Where do you go from there?”

Cerissa gave him a sad smile. She wanted to say supreme Master mage, grand adventuress, world explorer, heroine of exceptional reputation, but all of those things were just silly dreams. For the moment she was just plain old Cerissa June, instructor of the fifth grade. That had been enough for her until recently. It was safe. It was sure. What exactly had happened to her to suddenly make her want something more?

She had looked down at her simple clothing one day and realized that it no longer represented what she wanted to be.

“Anything but ordinary,” she whispered to herself.
“Hunh? What was that?” Mortimer asked.

“Silly man, you know that I’ve been dabbling in magic,” she said more loudly. “I’ve been noviced to Ardelle for five years now. She thinks I’m ready to move on. She says I have an amazing aptitude for transformational spells and she insisted I apply to Magic University. They’re sending someone for my interview later this week. They may not accept me, in which case, I’ll be back here next year, but if they offer me a place in the Trials…well, I guess I’ll have a decision to make then, won’t I?”

Cerissa had already been through this debate in her head, and had come to her conclusions. She was committed to seeing this through, if she was allowed the opportunity to participate in the Trials. She would go, and she would give it her best shot, without looking back. “No regrets” would be her mantra. But Mortimer didn’t need to know that. Her ambitions might not pan out and she did not want his pity if that was how things went.

“Good luck then, Cerissa. You’re a braver person than I. Perhaps what we do isn’t all that exciting, but our job is important, and we leave our mark on the world.”

But had they, Cerissa wondered. They had helped mould young minds, they had invested time and effort in the future, but aside from vague memories some would keep from their childhood, nobody would remember what they had done. Cerissa wanted to leave more of a legacy than that.

She arrived home within the hour and started gathering up the things she wanted to take with her to the interview. When she was done with that, she would prepare supper and after eating she planned on calling it an early night.

“Reeree? Is that you dear?” her elderly mother called from the other room. Cerissa set her bag aside and walked over to the doorway. She had already made arrangements for her sister, Pomona, to come stay with her mother if she was chosen to attend the Trials. Cerissa had avoided marrying, having children and other responsibilities that would tie her down, but one cannot escape aging parents unless nature dictates otherwise and claims them early, as it had with her father. She had put in her time with her mother. Now it would be her siblings’ turn.

“It’s me. I’m just making things ready for the interview. They could be coming as soon as tomorrow. They told me anytime within the week. When I’m done I’ll make us something to eat.”

The white-haired gnomish woman peered at her daughter, her eyesight failing.

“Something for Rex too?” she asked.

“Of course, Mom. I’d never forget Rex.” The albino gecko in question gazed at Cerissa through the glass of his terrarium, blinking his deep pink eyes and flicking his little forked tongue. She had summoned the familiar as one of Ardelle’s final tests, to see if Cerissa was ready for the Admission Trials. The little lizard seemed to suit Cerissa’s personality perfectly. She liked to talk, and he didn’t mind listening.

Her bag packed and supper on the go, Cerissa returned to sit with her mother.

“Do you think I’m doing the right thing, Ma, or am I being foolish, chasing crazy dreams?”

“Now, don’t you start fussing over this, Reeree. It’s about time one of my children actually aimed for something bigger. You’ve worked hard to get to this place. I had many dreams I chose not to chase, and I did live to regret it. Isn’t that what you said you weren’t going to do? No regrets? Pommy and Fraser would never leave this place. It’s best that it’s you.”

Cerissa nodded. Her siblings were not the type who would ever stray far from home. Then again, until recently, neither was she. This would be a huge change for her, if she succeeded. She might never find her way back to Smallport, once she left.

Her dreams were rather chaotic that night. At the most vivid point, she found herself standing before a replica of herself, and her double was maligning her in a somewhat cruel way.

“Look at yourself,” the second gnomish woman snapped. “You’re no wizard. Wizards are special – they have spark, they have pizzazz. Why would you ever think you could be anything but ordinary? Your clothes, your eyes and your hair say it all. I’m a nobody. I’m meant to live a small, quiet life in a small, quiet town where nothing ever changes and nobody ever aspires to anything more. What makes you think that you can do it? You’re no explorer. You’re no adventurer. And you certainly aren’t hero material. You were right with what you suggested to your mother. All of this is foolish. Put it away in a little mental box, stash it in some dark corner in the closet of your mind and forget about it. You were never intended to be anything more than Cerissa June, school teacher.”

Cerissa awoke still wallowing in those doubts, something she had promised herself she wouldn’t do. She was startled by an early morning visitor, a messenger who had been sent to inform her that the interviewers from Magic University had already arrived and would be expecting her at the community hall after lunch. She rushed around her little house; tidying up, making sure her mother was tended to and trying to force her negative thoughts out of her mind. When she finally got around to gathering up her magical tool bag and scooping Rex up out of his terrarium she was a nervous wreck. She might not have been, she considered, if her dreams had not been so discouraging.

Cerissa noticed, as she slipped Rex into his special pouch within her bag, that his skin felt odd. She did not know enough about reptiles to determine the cause and hoped her little friend hadn’t fallen ill. His pink eyes were as bright as ever and he did not seem lethargic in any way, so she assumed that it was nothing serious. With a quick goodbye to her mother, she set off for her interview.

The community hall stood at the highest point in town. All of the Shortlands rested within mountainous terrain or the foothills below those mountains. Smallport was no different. The entire town had been built on a hill, and Cerissa, with stubby legs unaccustomed to much climbing, tired quickly. She paused to take a breath by a large bush of hydrangeas, pulling Rex out of her bag to check on him.

“Aw, Rex – I’m so tempted to just turn back and give this up now. How can those interviewers take me seriously? What if that other me in my dream was right? I know I’ll regret it if I don’t try, and I swore to myself that I won’t allow myself to make any choices I know I’ll regret, but I just don’t think I’ll make any sort of impression on them. I need a way to show them that I really am special, no matter what my other me said. I need to show them that I’m ready to change.”

Change was everything here, and not just with regards to her lifestyle. Transformational magic was her strong point and that was what she had to demonstrate to the interviewers. How could she do that while she was struggling to deal with change herself? She had to find something that would strengthen her resolve and give her much needed confidence.

Rex started scrambling frantically about on the rock upon which she had placed him, scratching vigorously at himself. She watched him for a few moments and finally realized why his skin had felt so strange. He was shedding it. Perhaps, she thought, that’s what I need to do too.

If the thing that was bothering her so much was that she was convinced she didn’t match the image of a wizard, that she was too small and plain and that she didn’t stand out, then maybe she needed to shed her skin. What better way to show that transformation was her greatest talent?

Cerissa glanced around for inspiration. The hot pink hydrangea blossoms caught her eye. She had always loved that colour. It was warm, bright and invigorating. It was something that was hard to ignore – just what she wanted. She could shed her plain look with just an infusion of vibrant colour. Touching a single stubby finger to one of the flowers, she spoke the words of a spell she knew very well. Had anyone been observing, it would have seemed to them that the colour poured directly from the flower into the very fabric of her clothing. It also streamed up into the roots of her hair, gradually trickling its way down every strand. The pink even invaded the irises of her eyes. By the time the spell was complete, she no longer looked like a dowdy little school mistress. She was now so colourful it almost hurt to look at her.

“There,” she declared, gathering Rex up to return him to her bag. He could finish his scratching and shedding inside. She now felt like a completely different person and the idea of presenting herself to the interviewers no longer bothered her. “I’m not Cerissa June, school teacher anymore. I’m Reeree, aspiring wizard extraordinaire.”

She took a deep breath, mentally readjusting herself to go meet her destiny.

“Remember – anything but ordinary…and no regrets.”

And with that she set off for her date with fate.

Now We Are Green