This will be my final instalment of the field guide, and I’m digging deep to the true root of zombies. Before the biological-sourced zombies, before those originating from a hefty dose of cosmic dust, there were the zombies that were magicked into existence.

Search for the definition of the word zombie, or as it was initially spelled in Creole “zombi” (believed to be from the West African mythos, Nzambi), and you’ll come up with references to Voodoo, snake gods, spells, cults and the supernatural. 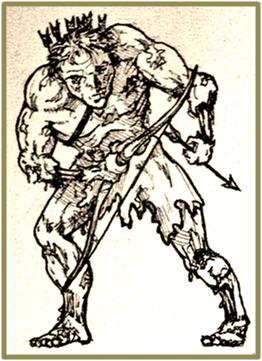 As scepticism in all things demonic, spiritual and necromantic has increased exponentially in recent times, fiction containing this type of zombie has dwindled. People don’t fear the supernatural the way they once did, and since the zombie genre tends to reflect current fears, there is less call for their kind. While uncommon, however, there are still some exciting and extraordinary examples of magical zombies in today’s popular culture, but they are often secondary to the modern day toxic shamblers or viral runners, and tied to some other

Voodoo zombies:
Haitian, Creole, New Orlean – it often begins with altars, animal sacrifices, strange chanting and potions concocted from the poison of the puffer fish. The zombies that are enchanted to rise again can be typical undead, will-less servants to their voodoo masters until they ingest salt or meat (although in this last aspect, definitely not the Romero norm.) Some experts hypothesize that “real” zombies had never died at all, but were in a deep coma, and awoke to an easily manipulated trance-like state. The earliest zombie movies featured this kind of black magic zombie, such as in 1932’s White Zombie, starring Bela Lugosi. This is the type of zombie in one of my latest short fiction projects, Dead to Write.

Supernatural zombies:
Spawned by Hell, or its demonic minions, these zombies are more vicious than their voodoo brethren. They are often vengeful spirits, like in Raimi’s Evil Dead or the Nazi zombies in Dead Snow, rising to defend their stolen treasure. They don’t tend to be as mindless as the usual zombie fare, possessed by evil and organizing to attack their victims. The only thing definite about this variety is they tend to be strong and unpredictable, often existing beyond expected zombie “rules”.

Fantasy magic zombies:
The most likely place to find magical zombies in genre fiction nowadays, are in dark fantasy novels set in wizardly worlds. Necromantic wizards, witches or priests reanimate or control the zombies in those tales through their spells or evil prayers. Sometimes they wield enough power to gather together entire armies of undead, a very frightening premise. The zombie novel I have completed during the last NaNoWriMo, Sleep Escapes Us, is dark fantasy, based around the mythology of ancient Thrace. If the concept interests you, you may want to check out a few of my first draft chapters at: http://www.scribd.com/chantal_boudreau