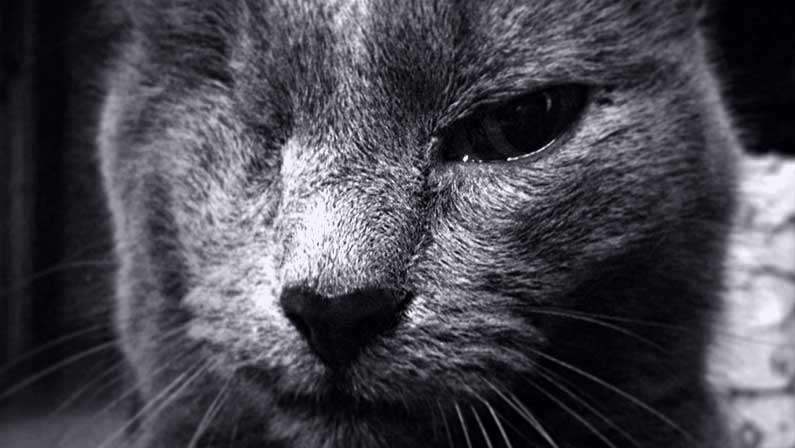 Out beyond the window under an angry silver and gray torrent of God’s tears, a storm begins to gather steam. The world outside is brilliantly captured in a swift flash; everything is frozen still, and then thrown back into sudden relief as a jag of lightning splits the sky in a slashing rage of light.

I see him again. He huddles there beneath the trees cringing against the bellowing crash of the immediate ferocity of a resounding thunderclap.

A smoky gray cat sits there trying to outwait the storm, or perhaps he waits for me to move away from the window glass. He watches the space outside of the safety of the trees carefully. His one good eye gazes up at me and then flicks impatiently away. He scans the yard again.

He must once have been very sleek and powerful but now he sits outside avoiding even the light cast by the house. He is scarred with one ear tattered and notched in the corner. One of his eyes has been damaged in some long-ago battle. It appears to be just an empty socket now.

His once obviously magnificent tail had probably been his crowning glory but is now bent quite unnaturally. It has been forced to an odd hard angle from a deformed lump that is visible just a few inches from the tip.

It doesn’t seem to matter to him that his skin is flawed because he manages to raise his head in a regal way as if he is holding court somewhere, anyway.

He appears to claim this space as his domain. His movements are precise and measured even with the map work marring of many scars upon his flesh; he casts an important shadow. It seems that every line of his body and the formal bearing of his manner shout out that he had been intended for greatness; his carriage is a nod to a grand time that perhaps only he remembers. The scars of his skin are marks of a great betrayal of a body reflecting a skewed-up version of a story that wasn’t ever meant to be.

It is obvious to me that he once had every intention of being beautiful. At least it seems that he started out that way but that somewhere along the way through some collapse of fate, the princely dreams were cast aside, and he conceded the fight. He had long since settled on a simple sheer will be reduced to whatever it took to survive it seems.

He comes here for the food left out in a gauche and ugly plastic yellow bowl. Through a haughty stare and a remembered ghostly shiver of pride that still ripples through his skin, he raises and licks a paw; he seems to tell me with this grand act that this is all a cosmic mistake.

There is no doubt that I am in the presence of royalty. I believe that he is really a misplaced Duke, who has somehow lost his way. I am certain that it is he who graces this yard with his presence. It is a bestowment of his royal favor upon us and not at all the other way. As I watch, he puts his paw back down swings his gaze away, and raises his regal head.

His sharp gaze seems to utterly dismiss the straights of poverty in which he has now come to find himself. I think that as he stares far into the distance that he actually transcends this yard and transports himself to inhabit another time.

Perhaps he conjures up remembrances of a far gentler and kinder time, one in which he was cossetted and pet softly to sleep by his many attendants who leaped at his every command. I can easily believe that in some far off time he had once had a custom of caviar and Limoges of an afternoon

Perhaps he is remembering a time when he regularly lashed up dainty delicacies. His reflections might take him to a place away from here where he lounged in peace on long soft afternoons that he inhabited in far finer times. I can easily imagine that he commanded attention easily. Perhaps with a mere flick of his ears, or with a slow imperial blink of his eyes, or in the soft languorous stretching of a slanting resting but powerful paw.

Maybe it is that he lounged on some long-ago window ledge and lazily yawned and stretched his paw gently to play with the dance of drifting dust motes. He rested in sunlight spilled patches on the scrubbed surface of a honey-colored hardwood floor. Or maybe it was that he slept in the kingliest of beds and sprawled all of himself across the fineness of silks, brocades, and satins.

His gaze swings up to me suddenly reaching me through a curtain of rain. His stare locks onto me intent fully. It is as if he wishes to communicate something to me of what he has seen. He was; his stare seems to cry out, warm and fed and wealthy beyond compare– because once upon a time he was very dearly loved. That was royalty enough.

It must be years now since he last was touched, and he has been rejected and neglected to the point that even words spoken softly and low in the kindest of tone startle him away to run beneath the trees. If I were to move now, even behind the window glass from far across the yard, I am certain he would bolt and miss the comfort of the food in the ugly bowl. I remain still.

He has been hurt irreparably; I suppose. I think that, like the fine china he once supped upon that, he was also much too delicate to the sudden whim of fate that brought him here. Like that fragile bone of china would be if shattered and crushed underfoot in some long-ago fit of rage scattered into a thousand tiny bits and thrust to the winds, I believe that he too is equally as broken. There is perhaps no hope of repair. He seems much too beautifully fractured for that.

Where would one even begin to try to fit all of those pieces back together again? In just that way, he will probably never be whole again. I have vowed that I will make my offerings every day. I will never give up.

Today the rain separates him from even the tiny warmth of the plastic bowl. My heart aches for him. I wonder if he resents my notice of him. Or, is it only then those parts of him get to live again? Does he even know that I see him? Perhaps it is that I am the only one left in the world that bothers to at all.

I am ever more certain that he is a Duke. There was some catastrophic collision with a mistake of destiny; I am sure. He is now a portrait of faded royalty. Nobility is at war with this sudden humility. They are parts of him that come to immediate odds as he suddenly begins to slink to the garish splash of yellow on the cheap plastic bowl.

I watch as he scarfs down several soggy mouthfuls ravenously. For a moment, his body seems to come to a sighing stillness at rest. Then his gaze reaches me, defiant and haughty once more. For a flickering second, we are both stilled and captivated by each other, and we are locked eye to eye. We see each other in the perfection of timing that is caught just between a lightning jag and the next thunderclap.

In a split moment by a trick of the light, I lose sight of him. I search the space under the trees only to see that he has vanished. Like a shadowy wraith, he is gone once again.