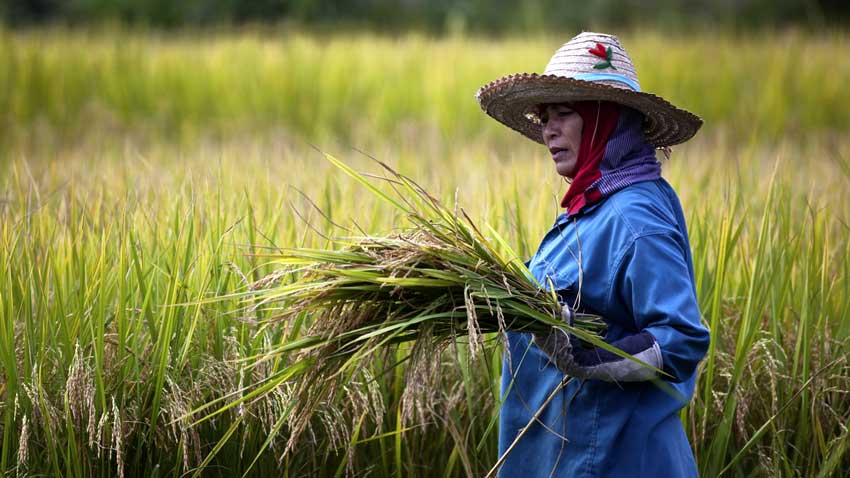 Thai Harvest Tour: During Thailand’s harvest heat, bathing was a waste of time, because your pores opened up and perspiration leaked out before the bathwater had a chance to evaporate from your skin.

But out on the hills north of Bangkok, the heat was only one of many things that could make you sweat.

After the farmers had harvested the rice, they spent the remainder of the summer reclining in shady spots by the river and smoking opium. The ones who weren’t stoned made a few extra Bhat guiding foreigners, called farang, on tribal tours through the hills near Chiang Mai. Afterward, they spent their earnings on opium then headed for the cool riverbanks to smoke it.

Jeremy smelled barbecued pork on his way back to the stilt hut balanced eight feet above the ground on pilings made of tree trunks. The wooden steps protested as he climbed the steep staircase. He stepped onto the elevated porch and toweled his hair dry while he waited for his Thai guide, Tana, to finish his piss off the far side. On the floor by the stairs, two skewers of pork and peppers lay sizzling over a barbecue grill. A cloud of tiny flies hovered above two bowls of cabbage rice perched on the railing.

“Chatchai, that you?” Tana shouted over the crickets. With his back to Jeremy, Tana raised his hand to acknowledge hearing the creaking of feet on the staircase.

“Uh?” Tana said. He cupped a hand over one ear.

Jeremy pulled a river parasite from his hair and flicked it against the bamboo wall of the hut. “I said it’s not Chatchai, it’s Jeremy.”

Tana glanced over his shoulder, a look of concern on his face. “Where’s Chatchai?”

Tana turned around and scrutinized Jeremy. “Surprising to see you.”

“Why are you surprised?” Jeremy tapped the barbecue grill with the toe of his sandal. “You told me breakfast would be ready soon. So here I am, ready for breakfast.”

Tana took hold of the medal of St. Christopher hanging from his neck. He started rubbing the medal between his thumb and finger. “I think already you still swimming, Jeremy.”

Jeremy shrugged, having given up trying to decipher Tana’s non-stop Pidgin English. He watched the little man rub the medal of St. Christopher as if trying to wear it smooth.

“That’s a cool necklace,” Jeremy said. “I really like it.”

“St. Christopher,” Tana said. “He brings me the luck.”

Jeremy gave Tana a baffled look. “Christopher is a Christian saint. Aren’t you a Buddhist?”

“On a good day I’m Buddhist.” Tana pulled out a pipe and a pinch of opium from his fanny pack. He put the opium in the pipe, then held a lighter over it and took a puff. “Today I’m Christian.”

“I know where you got the opium. Where’d you get the medal?”

“Farang on my tour already. Last year. Farang like you.”

“I’d like to buy it from you,” Jeremy said, “the medal, not the opium. How much you want for it?”

“I have to pay you something. It wouldn’t be right to take it for free.”

“Stick out your hand.” Tana unfastened the necklace and placed it on Jeremy’s outstretched palm. “Try it on.”

Jeremy put on the necklace.

“What did you mean when you said you were going to take all my money later?”

“Just like that,” Tana said. He took a puff from the pipe. “I’m take your money, your camera, your clothes.”

Jeremy rolled his eyes. “Do you have to turn every conversation into a weird Thai riddle?”

“Alright,” Jeremy said with a grin. “I’ll play along. Why are you going to take my things?”

“You not need them.”

“Too much questioning, Jeremy. I ask you, why keep things when you sleeping in the ground soon?”

Jeremy snapped a fly off the railing with his towel. “Sleeping in the ground? You mean like dead?”

Jeremy started to laugh. “Do you realize you’ve been telling jokes dawn-to-dusk for four days straight? Is joke-telling some kind of Thai deal?”

“Not Thai deal. Not jokes either.”

“If they’re not jokes what are they?”

“They Tana deal.” Tana reached behind his head and peeled off his shirt, revealing a large dragon tattoo that encircled his narrow torso. The contrast of the fearsome creature adorning the body of such a diminutive, bespectacled man was bizarre.

“I know you’re joking,” Jeremy said as he stared at the dragon. “I can tell when you’re joking. You’re eyes kind of light up.”

“This my only white shirt,” Tana said. He draped the shirt over the railing. “I keeping it clean.” He pointed at his red basketball shorts. “Perfect colour,” he said, laughing. “I don’t take them off.”

“Are you really going to, you know, kill me?” Jeremy said, half smirking.

“Of course.” Tana walked past Jeremy to the other side of the porch. He put his fingers in his mouth and whistled. “Where’s Chatchai? He should already kill you. Then we bury body.”

Tana nodded vigorously. “Yes, part of tour.” He took another puff from the pipe. “We inviting farang like you. See Thai hill tribes. Smoke opium. You come in group, you okay. You come alone, we rob you. Helps pay for tour.”

Jeremy stared at Tana for a long time.

“You’re serious, aren’t you?” Jeremy said. “I mean about killing me.”

“Very serious.” Tana took a long pull on the pipe. He held his breath until the smoke sparked a coughing fit.

Tana lifted a skewer off the barbecue and blew on it. “Is happen already,” he said. “No worry. You die no pain.” He grinned. “Maybe a little pain.”

“Stop talking about dying,” Jeremy said. “You’re scaring the shit out of me.” He stuck his hand inside his shorts and came up with a wallet attached to a lanyard around his waist. “Just take my money and let me go.”

“If I let you go, you running to police. If I kill you, no problem me.” Tana slid the contents of the skewer into his mouth, barely chewing it before he swallowed.

“I won’t tell anybody,” Jeremy said, sounding a little frantic. “Just let me go and it’ll be like I was never here.”

Tana frowned. He turned toward the river and whistled again for Chatchai.

“Wait a minute,” Jeremy said. “I have something that will change your mind.”

Tana picked his teeth with the skewer. “Nothing changing my mind.”

“This will.” The panic had suddenly left Jeremy’s voice.

“What now, farang?” Tana turned back to Jeremy. His eyes widened. “You thief.”

Jeremy was waving Chatchai’s knife back and forth. He looked at Tana with amusement.

Tana sucked air through his teeth. “What you doing with Chatchai knife?”

Jeremy slid the blade in and out of the sheath. “I love this knife,” he said. “It’s heavy enough to chop wood.”

Annoyed, Tana tossed the skewer into the forest. “What you problem, farang? First, you scared little baby afraid to die. Now you silly talk.”

Tana held out his hand. “Stop gaming me, silly boy. Give me knife.”

Jeremy held the knife in one hand while he slipped his shirt off with the other. “My only clean shirt,” he said, the corners of his mouth curling up. “I don’t want to get it dirty.” He hung the shirt on the railing, and then took a good look at Tana. No longer annoyed, the little man seemed to be studying Jeremy’s face, as if he was trying to piece together a puzzle.

“Wow,” Jeremy said. “This is a first. Tana speechless.”

After a long pause, Tana said, “I know you.”

“Well yeah, you do know me. We’ve been wandering around the forest the last four days.”

“No, on earlier times.” Tana took a step back. “You here already. Last year. I remember.”

“Never been to Thailand before,” Jeremy said.

“Not possible,” Jeremy said. “This is my first trip to Thailand. You really need to stop smoking that pipe. It’s affecting your memory.” As Jeremy spoke, a look of horror appeared in Tana’s eyes, the kind of look that superstitious folk get when confronted by an apparition.

Tana waved his finger at Jeremy. “I know, I know, I know,” he shouted. “I know you. You dead. I kill you already. You dead a year. Now you return.” He backed against the porch railing. “Stay away. Go back in ground.”

Jeremy nodded. “I know what you’re thinking, and you can stop worrying. You think I’m a ghost, don’t you? Well, I’m not. You’re thinking of my brother, David.” Jeremy lifted up the medal of St. Christopher that Tana had given him. “This medal belonged to David. I knew it was his the first time I saw it around your neck.”

“His twin. A year ago, David came to Chiang Mai to smoke a little opium and show off his new Thai pants. He never returned home. I came looking for him. I put up pictures of David outside the hostels. Spread money round town. Found out about you. You have a reputation. The go-to guy for drugs.”

“Chatchai can’t hear you.” Jeremy pointed toward the river. “He’s still swimming. You can see him. He’s a little to the left.”

Tana leaned over the railing and shaded his eyes. He could see where the river current had pinned Chatchai’s body to a boulder. He inhaled sharply when Chatchai’s knife slipped between his ribs.

Steve Doran, a writer of humorous novels, short stories, and television scripts, resides in a weird little corner at the back of his mind. His body can be found near Toronto, Canada.

Jayme Whitfield Jun 5, 2015 4
The Jane Austen Trap Like most women, I have spent countless hours engaged in discussion and debate on life and…
Featured