The car slid to a stop on the carpet of heavy gravel just outside the old railroad tracks five miles outside of Scranton. Even before the car came to a halt the driver’s side door flew open and a man came rolling out of it with a gun in his hand.

Tall man; lean and wiry like a strip of rawhide, his face white as snow and contorted into a twisted mask of fury. 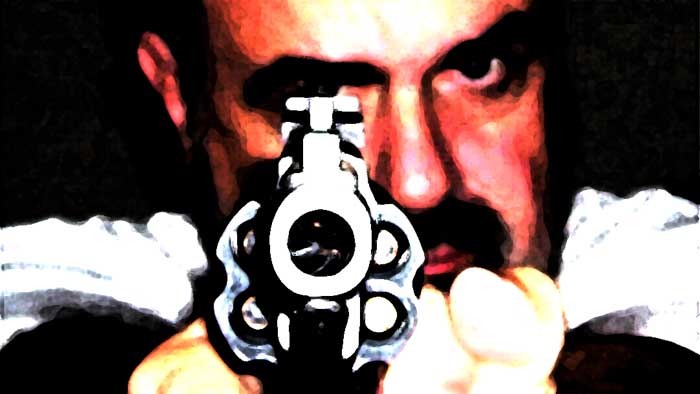 Hurrying around to the passenger side of the car he threw the door open, grabbed the woman by her hair, snapping her mercilessly out of the seat with a yank of his arm. Pushing and shoving her like a gulag prison guard he marched her down the deserted tracks and told her to stop and turn around.

It all began twenty-four hours earlier.  Standing at a teller’s window at his bank and staring at a bank statement.  A statement that said thirty thousand dollars was missing out of his account and realizing his brother—his twin—had just purchased a brand new car.

A car that cost almost thirty G’s.  Crumpling the statement in his fist he turned and left the bank in a black rage.

Black rage turned to a killing rage when he stepped up to the front door of his brother’s home.  Lifting a hand up to pound on the door his eyes glanced into the house through the small window in the door.  And that’s when he saw the two together.  Half naked and wrapped in each other’s arms like living mummies.

His brother.  His wife.

He stared at them for a long time.  Watched them make love.  And then something snapped inside him.  Stepping off the porch he walked to his car, fumbling for his keys.  Stepping to the back of the car he unlocked the trunk, reached in and gripped the tire iron and stood up, closing the trunk in the process.  And then he turned and walked back to the front door.

A foot in the middle of the door splinted the frame as the door exploded open.  Walking in he watched the two try to disengage themselves and scramble for their clothes.  Slapping his wife to one side he turned to his brother and hit him across the face with the tire iron.  His brother’s head snapped back and he fell to the floor unconscious.

Turning, he grabbed his wife by the arm with the strength of a madman and dragged her out of the house and to his car.

And now here they were.  Standing on an unused railroad spur in the middle of the country with murder in eyes and a gun in his hand.

“You never could keep your hands off Jimmy could you, Francine.  Always Jimmy. You marry me ‘cause you know I’m the stable one.  I’m the guy who’ll go to work and come home ever night and wash the dishes and do the cooking.  But Jimmy’s the one with the smiling face and the bad boy attitude.  It’s Jimmy you love.  Since we were kids.

Always Jimmy. Well, you know what I think?  I think you two deserve each other.  Have him and good riddance.  But you’re going to pay for it. He ‘s gonna pay for it. Goodbye, Francine. Can’t say it’s been a pleasure.”

Lifting the gun up he buried the muzzle onto her brow just above the bridge of the nose. Francine, make-up smeared and running down her cheeks like a crazed circus clown, eyes filled with tears and terror gripping her heart, closed her eyes and waited for death to claim her. The steel pressed against her head was as cold as death itself. She felt his radiating fury in front of her. Heard him grunting and sobbing in anger and pain.

The sound of a firing pen striking an empty chamber.

Stunned, she opened her eyes and saw her husband walking back to the car, gun down at his side, his head bent down in desolation and wracked with sobs. Numbed with the realization she was alive–that she would live–all strength left her and she collapsed to her knees on the tracks and stared at the back of her departing husband.

He stopped halfway to the car and slowly turned around.

“There is no Johnny, Francine.  Johnny died about an hour ago.  Call me Smitty.  Better yet, don’t call me ever again.  We’re through.  Finished.  The next time I see you or my brother I’ll kill you both.”

Smitty, climbing into the car, took a look at the woman kneeling in the middle of the tracks–at the woman he loved–and felt the cold emptiness in him. Starting the car up he backed up, turned around, and left Scranton.

B.R. Stateham thinks he can write stories with a heavy dosage of noir folded into the words.  Maybe so.  Maybe not.  The writer is sixty years old with a book or two out on the market.  One of them, Murderous Passions, is about two homicide cops and four tough homicides to solve.  Maybe someday book two of the series will come out entitled A Taste of Old Revenge.

Another Sickening Feeling – A Letter to God