“It was the darndest thing, I tell you.” Fred scraped his chair back from the oak table, got up, and walked over to the window. “I been camping and hiking hundreds of times, and I ain’t never seen nothin’ like that.” 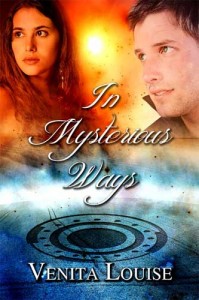 He bent in front of it to catch the warm breeze that fluttered the tan and yellow cotton curtains. He turned to give Andy a perplexed look.
Andy ignored it, got up and went to the rustic built-in buffet, and poured himself a cup of hot coffee.
“Okay Fred, you saw lights.”
“Brighter than any lights I ever saw before.” He stepped back and resumed his seat at the table. He swallowed hard as his eyebrows knitted. “They had to have flashed for a good stretch of time.”
“You want a cup?” Andy offered.
“Yeah.” He laughed quietly. “I sure ain’t gonna kick the caffeine today. I’m free of all of Patsy’s nagging for at least a week while she’s off visiting her mother. Quit caffeine, quit carbs, watch your cholesterol, she tells me! Geez, she has me on so damn much fiber I think I have driftwood floating in my colon.”

Andy chuckled. “What else did you see?” He set the mugs on the table.
“Well, like I said. There were the bright lights, and I felt heat-like energy running through me.” He brushed his hands slowly down the front of his shirt to demonstrate. “I remember looking at my watch and the second hand was stopped, so I started to count. One miss-sippy, two miss-sippy, I got all the way to forty-seven miss-sippy before they took off as quiet as a whisper.” He pointed to the ceiling. “Not sideways, but straight up.” He blew the top of his coffee and took a cautious sip. “Strange thing is Patsy said she didn’t see anything. She was inside the tent reading her book. When I told her about it, she said she was afraid I’d fallen off the wagon.”
Andy suppressed his amusement and peered at him over the top of his mug. “So you were the only one in the area to see the lights.”

“Ah, come on, I didn’t imagine it,” Fred said with frustration building in his voice. “My damn dog was anxious as hell, runnin’ in circles and markin’ territory to beat the band. I know by the way he was acting, he saw it.”
“If only Charlie could talk.” Andy grinned.
Fred snorted into the top of his coffee, blowing a few drops onto the table.
“Look Fred, I’m not saying you imagined it. Maybe it was a police helicopter checking out the area, looking for a suspect or something.” Andy had known Fred for over ten years, and during that time he had never given him cause to think he suffered from an overactive imagination or paranoia. Still, his bizarre account of mysterious lights and watch-stopping heat was a bit much for him to swallow, no matter how detailed it was.
Fred laughed without humor. “Don’t you think I know a helicopter when I hear one? There was no sound at all,” he said, as he wiped up the coffee with the sleeve of his shirt.
“What do you want me to do?” Andy asked. “I didn’t see it. I believe you saw something, but there could be a very logical explanation for what you saw.”
“Come out there with me, I want to show you.”
Andy shrugged. “There’s nothing to see now. The lights are gone, right?”
“That may be true,” he said, as he reached in his shirt pocket.
“But look at this.” He produced what looked like a bent piece of a weed and held it out.
“So?” Andy took it from his fingers and examined the stem. “You pulled a weed.” He shrugged.
“Look closer,” Fred said and placed his elbows on the table to lean forward. “See the blowholes?”
“Blowholes?” Andy frowned.
“Yeah, all the juice in the plant has been forced out from the inside like it was heated in a microwave or somethin’.” Fred pointed to the area he was referring to.
Andy leaned back in his chair and twirled the stem between his fingers.  “I’ve seen this before, the sun does it.” He gave him a deliberate smile. “Arizona is about ten degrees hotter than hell. You know that. It isn’t unusual for a plant to react this way.”
“Maybe so.” Fred took it and held it over his head at arm’s length and squeezed one eye shut to get a more focused view. He sighed, brought it down to eye level and gave Andy a peculiar glance. “But it doesn’t get hot enough in this area for this to happen, and only the plants in the twenty-foot radius looked like this.”
Andy tipped onto the back legs of his chair and went silent. He folded his arms and studied the plant stem.
“You know what else?” Fred asked grimly.
“What?”
“Patsy said I was outside the tent a good half hour, but I could only account for a few seconds.”
“I’ve never heard of a crop circle in Arizona,” Andy said skeptically and brought his chair down on all four legs with a thump.
“I’m telling you,” he waved an arm in a circular motion, “some of the plant stems were flash burned right onto the rocks.” He laid the stem flat in the palm of his hand. “But only inside the circle,” he muttered.
“Okay, Fred.” Andy sighed. “I’ll go with you, but it will have to be tomorrow. I have clients to pick up this morning.”
Fred released a breath and slumped in his chair. “Thanks, Andy.” His expression turned edgy.
“What’s that look for?” Andy asked.
Fred shrugged. “I feel as nervous as my dog does when he knows he’s goin’ to the Vet.