Dürer’s The Praying Hands: The Story 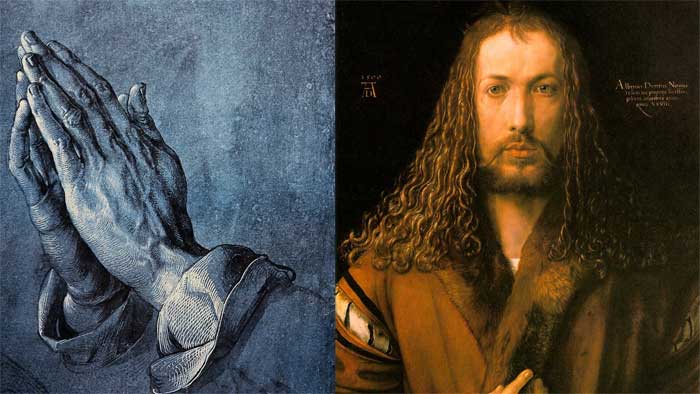 Dürer’s The Praying Hands: The Story

The Hands That Got Poor Albrecht Dürer Through Art School.

Artist/Teacher Barbara Garro says, Like other art lovers, THE PRAYING HANDS give me an image that can occupy my mind for a reverie of time.

How many times have you wondered why THE PRAYING HANDS captivate so completely?

You must have noticed—
1. The crooked pinkie finger on the right hand
2. The misshapen fingers on the left hand
3. The evidence of the hard work those hands did

Next time you have a chance, Google THE PRAYING HANDS. Look at the 2 hands praying and then look at your own hands. As a single artist, for example, I have had men who really should have been better engaged with their manners, mention in real astonishment MY, YOU HAVE HARD-WORKING HANDS.

Well, thank you very much for sharing. Still, as hard as my hands have worked over my lifetime, they look pretty compared to THE PRAYING HANDS.

To find out about the hands that paid for Albrecht Dürer’s art education, come with me to Germany in the 1400s to a small village near Nuremberg where a father and mother struggled to feed and clothe their 18 children. Albrecht Dürer, a goldsmith, their father, worked long hours at his trade and still searched for other paying work.

Back then, sons looked at their fathers and saw themselves and their lives. Yet, two of Durer’s boys, Albrecht and Albert, had the vision to pursue their art and study at the Nuremberg Academy.

While they knew their father could never afford to send them, they worked out a plan where one would work in the dangerous mines while the other attended The Academy for four years.

While Albrecht attended the Academy, his etchings, woodcuts, and oil paintings drew much favorable attention as they were better than most of his professors. By the end of his four years and graduated from the Academy, Albrect Dürer commanded good fees for commissioned work.

On Albrect’s return to his village, his family held a celebratory dinner for their successful son. After dinner, Albrecht rose and made a gracious toast to his beloved brother for his years of toil on his behalf, ending with the words, AND NOW, ALBERT, BLESSED BROTHER OF MINE, IT IS YOUR TURN. NOW YOU CAN GO TO NUREMBERG TO PURSUE YOUR DREAM AND I WILL TAKE CARE OF YOU.

All eyes gazed at Albert. A pale-faced Albert, sobbing and shaking his head repeated over and over said, NO, NO, NO, NO!

Looking into the shocked faces of his family, Albert pressed his hands, palms facing each other, against his right cheek and spoke, No, brother, I cannot go to Nuremberg. It is too late for me. Look—look what four years in the mines have done to my hands!

The bones in every finger have been smashed at least once, and lately, I have been suffering from arthritis so badly in my right hand that I cannot even hold a glass to return your toast, much less make delicate lines on parchment or canvas with a pen or a brush. No, brother—for me it is too late!

THE PRAYING HANDS, I believe, draw people in so powerfully, because Albrecht Durer painstakingly drew Albert’s hands, palms together, pointing toward heaven, just as he had placed them on his face when he told his family his hands were too damaged to pursue his dream of attending the Academy in Nuremberg.

Albrecht named his masterpiece HANDS, but the world calls Albrecht’s tribute of love to Albert, THE PRAYING HANDS. Without Albert’s efforts, we may never have known the genius of Albrecht.

One Hundred and Ninety Two

Lose 10 Pounds in a Week

Jack Eason Jul 30, 2012 0
Internet Evil Since book publishers have made it possible for members of the general public to review books on the…
Society