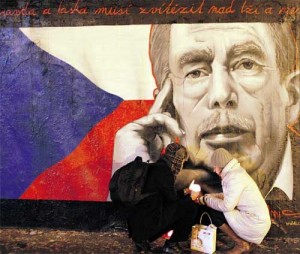 The night takes the best of us with the worst
Some quotations will always remain un-sourced
Some birds sing only once in a velvet moon, a song of courage
Some cigarettes are meant to be smoked at the dissolution of marriage

You are our brothers in language, alphabet and Christ, we mourn with you
Fellow brethren, children of Przemys’, we Western Slavs, we few
In the sea of Cyrillic you are our kindest and dearest friends
The world is always better knowing there are Chechs in nearby lands

He was your lark, he rose to sing the song of indignation
He was you Gentleman warrior, your Knight liberating your whole nation
That he has died, leaves me in tears, I drown in them, as in a Bohemian well
An unbearable heaviness of being, a tide of pain that seems to swell

The world will be a lonelier place now that we’ve lost his soul, his brain
Who will quip to us that to be a man one must first be humane
That man is not the highest source of all things, that too much seriousness leads to foolishness
That the calm peace is also found in a city morgue or a grave, is that desirable more, or less?

There is a river named Havel in Germany, I think it has nothing at all to do with Václav
And a people once lived there named Havelli, from the tribe of Slav
Were you one of them in reincarnated spirit come to remind mankind
Of dignity and grace and the resistance of Plastic people who have a free mind?

If you were an ancient spirit from long ago, we’ll let the ancestors know
You did right by them, you put on a great play and an amazing show
The audience not only cheered standing up at the end of the final act
But when they carried you off the stage, the world chose to react

Write us another play in the times before the ploughman and the wheelwright
Write us a play of deep moral convictions and men who see the light
Of Kings who speak in verse, and shake hands with all men the same
We will wait for it patiently, as long as men remember your name.