Adam Trexler, growing up in an urban neighborhood in the middle years of the 20th century, yearns to make life easier for his mother even as he struggles with his abusive stepfather.

Striving to find support, friendship and wisdom, Adam comes of age in a most difficult setting that is at once heartwarming and fearful. Ultimately it is the legacy of his beloved grandfather that makes sense of his life as Adam becomes a man. Genre: Young Adult. 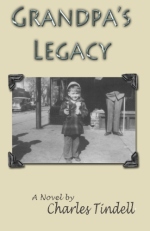 Adam Trexler gnawed on his lip until it drew blood as he watched Danny Logan and his two pals use a baseball bat on Frank. Waiting in the night shadows near the rear entrance of Skelly’s Liquor Store, he saw and heard everything in the adjacent gravel parking lot.

Danny glanced over to where he waited, nodding as though to say, Hey man, don’t worry. We’re kickin’ his ass good. He dreaded the moment when Danny would tell him that it was okay for him to come out.

The chilly November air caused Adam to shiver. He leaned against the brick wall of the liquor store. How had it come to this? A bus rumbled by on Broadway. He shut his eyes and pressed the back of his head into the hardness of the bricks. The sound and smell of buses always triggered the same memory.

It had been a little over thirteen years since he and his mother stepped off a Greyhound bus late one sultry summer evening in 1946 and were met by his mother’s older sister, Wanda. The tall, gangly woman frightened him.

Her dark eyes rested wearily on protruding cheekbones of a long, thin face. Although she was only twenty-nine, people often guessed Wanda to be in her forties.

An irregularity in her spine prevented her from standing straight, causing her to hover over others. Her childhood had been filled with nicknames, the most descriptive being the Vulture.

Adam looked to his mother, waiting for her to tell Wanda to stand up straight. When Wanda went to give him a hug, he instinctively clung tighter to his mother, hiding his face in her skirt. “Remember, he’s only four years old,” his mother had said.

The depot had been crowded that night. Along with vivid memories of bus fumes causing him to cough and wrinkle his nose, he recalled his mother and Wanda laughing when he asked what the man on the loudspeaker was saying.

Walking through the depot, he had hung tightly onto his mother’s hand.

Images, smells, and sounds came from every direction: a soldier playing a machine that made clanging noises; an old man sleeping on a wooden bench, his body twitching; a man and woman yelling at each other, using words that Adam’s mother had told him never to say; the smell of cigarettes and sweet perfume, stale popcorn, and toilets that needed flushing; the sounds of moths and other night insects beating their wings against windows; and always the man on the loudspeaker sounding as though he was holding his nose shut while talking.

He was glad when they left the building and he was able to breathe in the night air. When they reached Wanda’s car his mother put him in the back seat, telling him that he could lie down. As the car pulled away, however, he stood on the seat pinching his nose and talking quietly to himself while looking out the rear window.

After a long ride, they parked the car on a side street. He and his mother walked with Wanda a half block to a street where, to his puzzlement, there were no houses. When his mother tightened her grip, he wondered if it was because of all the traffic.

A bus went by and he wrinkled his nose, covering it with the fingers of his free hand. He clamped his mouth shut and tried to hold his breath. Loud noises from across the street captured his attention. People stood laughing in front of a bar, loud music spilling from its open door.

A breeze swirled bits of paper and other debris along the sidewalk prompting him to ask his mother if the “Munchies” lived here. When Wanda asked what he was talking about, Adam’s mother explained that where they used to live, the streets and sidewalks were always clean.

Having taken Adam to see the movie, The Wizard of Oz, she had told him that those little people called the Munchkins came out at night and swept the sidewalks and streets. “He calls them ‘Munchies’,” she had explained. Wanda looked at Adam and shook her head. “You’re not going to find any Munchies on Broadway.”

The entrance to Wanda’s apartment building stood midway in the block, tucked between a Woolworth’s and a second-hand furniture store. When he asked if they were going to live in the stores, Wanda had laughed. “Oh no, we live in the apartments above them.”

They climbed two flights of creaky wooden stairs. Walking down a poorly lit hallway to the back apartment where Wanda lived, Adam grabbed hold of his mother’s hand as monsters lurked at him from every shadow along the way.

After they entered the three-room apartment, the sound of the door being bolted had frightened him, but not as much as what happened next. When they turned on the kitchen light, he watched in horror as oval-shaped bugs scurried to find places to hide. “They’re only cockroaches. They won’t hurt you,” his mother had said. That night, however, he didn’t want to go to sleep. When he finally lost his battle to stay awake, he dreamt he was back at the bus depot.

He wanted to find the man on the loudspeaker to ask him what he was saying. Moving past the old man sleeping on the bench, past the soldier playing the machine, past everybody, he found himself in a dimly lit corridor. Although afraid, he kept walking, drawn by the sound of the man’s voice.

Finally, he came to a door. On the other side of the door could be heard the man’s voice. Turning the knob with both hands, he slowly opened the door. The room was dark, but enough light crept in from the corridor for him to see someone sitting on a stool, facing away from him.

He took a step into the room, stopped, bit his lower lip, and inched toward the person. When he got to the man, he tapped him on the back. “Mister.”

The man turned, and to Adam’s horror, it was not a man at all but a giant oval-shaped bug.

Adam woke up screaming. His mother had quickly come and turned on the light. She tried to calm him, saying that everything was okay. After turning off the light, she lay beside him. The next morning he begged his mother for them to get back on the bus to go home. He couldn’t understand why she failed to see that Broadway wasn’t a nice place to live. That day he made up his mind it would never be his home.

Chuck and his wife, Carol, have three sons, and four grandchildren. Oil painting, ventriloquism, baking bread, canoeing, jigsaw puzzles, collecting hourglasses, and writing are among his interests. They share their home in Apple Valley, MN with two (very spoiled) cats.