Colored Waters is the first Michael Chamber’s crime/mystery novel. Calloused and hardened as he has become, Michael has a difficult time watching the video someone is using to blackmail his client, Laurel Silverman, the beautiful daughter of a Hollywood producer.

Brad Stratton’s writing has been inspired by his personal experiences in the motion picture industry and his long-term love affair with the private eye novel and with the city of Los Angeles, where the passing of illusion for reality is a staple of commerce. 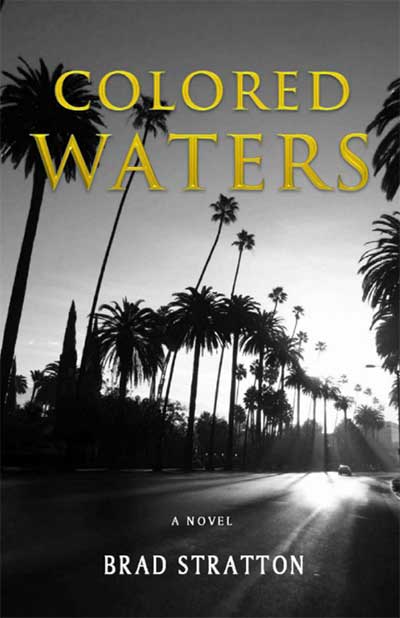 It was another cloudless morning and the sky was that deep, delft blue that comes only in winter to Los Angeles. One of those rare days, when hard night rain and ocean breezes conspire to sweep away the haze and the city is transformed. The air is fresh and clean, scented with a hint of jasmine, and the white stucco sparkles so bright against the deep green of the hillsides it hurts your eyes. It was a perfect Valentine’s Day, clear and bright and full of promise; the kind that makes you wish you had someone to give flowers to.

I was busy gazing out my office window, watching the boats on the bay perform their random wind dance, and listening to my telephone ring. It was too nice a day for sad stories and I was hoping whoever it was would decide their problems could keep until tomorrow, along with the smog. On the fourth ring, my conscience got the better of me. I picked up and said, “Floral delivery, forget-me-nots our specialty.”

“It’s Valentine’s Day,” I said, as though only a fool wouldn’t know that.

His voice was deep and resonant, full of authority, and used to giving orders but unsure of itself now, unfamiliar with nonsense. Perhaps remembering who he was, he barked at me.

“Chambers, this is David Silverman.” He paused to let the name sink in, “I have a private matter I wish to discuss with you and I’d like to see you at my home this morning.”

I recognized the name, as he obviously expected I would. It could be found among the opening credits on some of the biggest hits to come out of Hollywood in the past thirty years. Right under where it said Produced by.

“Gee, Mr. Silverman, it was kind of you to think of me but I just committed on a Scorsese project. Marty has already sent the contracts.” Marty was short for Martin, as in Martin Scorsese, but Silverman would know that. He would know, too, that I was lying.

There was so long a silence I thought he had hung up.

“Mr. Chambers, I’m afraid I haven’t much experience at this sort of thing. I apologize for asking you to come here on such short notice but I assure you this matter is urgent. It is imperative that I see you as soon as possible. I’m tied up in meetings all afternoon and I can’t reschedule. The principals are flying back to Europe tonight. If you could see your way clear to come over this morning I would consider it a substantial favor.”

That last line probably packed a lot of weight in his circles. Having David Silverman owe you one would be considered a big deal and, to be fair, it probably was.

He hadn’t hung up on me and he had apologized.

“Let’s start over, Mr. Silverman, who gave you my number?”

He was silent again. I could tell he wasn’t used to being auditioned, nor did he like it much. Finally, he said, “Barry Mann recommended you. He said you once helped him with a personal problem and he was pleased with your work. He spoke highly of you. He also said you were discreet.”

It looked as if Barry had moved up in the world and I was glad for him. He was one of the few movie people I knew who actually deserved to.

“All right, sir,” I said, “is there anything you want to tell me before I leave?”

“Not on the phone, Chambers. This is a very delicate situation.”

“Okay, tell me how to get there and I’ll be along.”

The directions were elaborate but impeccable. Just like the neighborhood.