1) You have to clear a human turd off your desk. Not a toy one. Not some practical joke piece of moulded plastic. This is a real human turd. Someone would have had to squat down, right there on your desk before you got in, to lay this length of steaming brown pipe. You can even see where the anus muscle has crimped off the tail of it, begging like a clever puppy, its front-paw in the air.
2) The email flag pops up cheerily and it’s a collection for your funeral. Enough money has already been pledged to buy quite a nice casket. Seriously, that is not right.

You’ve been summoned to The Monster’s transparent-walled office at the far corner of the open-plan space at 12:00 exactly. Today. This way he can be assured that, even with fake-FlexiTime, the office is jam-packed full of sleazy industry. Every employee will notice your Dead Man Walking, see how you fidget and twitch as you approach the Inquisitor’s Cabin. He loves this, your boss, The Monster. He loves the power game. Crystal glass corner office, furniture made of chrome that shines a little too sexily. You gotta love his theatrical panache.

Your unexpected sense of corporate dread and co-worker curiosity since your arrival in Oxford had obviously not gone unnoticed.

“New off-shore…ahem, Satellite. New contract,” says The Monster, having called you in to ‘tear you a new asshole’ or ‘motivate your productivity’, or ‘use whatever phrase you want’. That’s what all the old inertia-addled employees call him, The Monster. 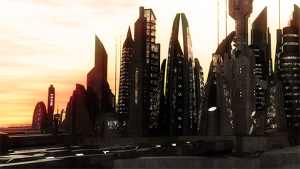 He sits there, with his archaic mic-set on his head, like he’s some sort of Grand Controller some Intranet D.J.. If he was on his feet, you’d see that he was tall and thin and has the kind of physique that can only be described as possessing ‘wiry strength’.

In fact, your eye’s have wandered over to his side of the office on several occasions and you’ve never seen him stood up, it’s like he’s welded to that chair. In fact, you’ve never seen him move, never mind leave the office and (perish the thought) have a random chat with an employee. The Monster’s like this malevolent ‘permanent fixture’ at the end of the office, where the real light comes in. Permanently scamming some New Deal at his level of The Industry.

A prisoner of his own glass cage.

“So, we’re no longer in Dusseldorf, Dorothy,” he has this strong northern accent and a right cunt of an attitude to go with it.
He doesn’t ask you to sit down. He just sits there, slouching back, chewing on a pencil. Looking up at you like he’s no older than a teenager, “Don’t look at me like I’ve just shat in your throat. We didn’t just ‘Relocate to Oxford’. An old hand like you. You realise this, I’m sure. We’re a totally new legal offshoot of the old octopus, my lover. New Rules,” he claps his damp palms together, “We have updated everyone’s NDA that’s Non Disclosure Agreement – you know nobody ever reads that shit, to their eternal damnation. We’ve altered the details of everyone’s employment contract to reflect our arrival in this new ‘Land of Opportunity’, he makes the sign for speech marks. Everybody, and that means you, little worm. Little worms!” he shouts insanely at the glass wall overlooking the workers, hammering on the glass with a fist, “That means you, and all your discontented sort.”

You start to say something in your defence but…

“You’re in The Industry, lad; The Industry. How long did you think you could suck on the teat? I mean, none of us is getting any younger, right?”

He wedges his pencil in his mic-set, just above his right ear.
“Sit. Sit, you look ill.”

You sit, right on the edge of the seat.

“This is just a courtesy call,” the inquisition grinds on, “A way for New Management, that’s me, to meet the New Staff, that’s you. And that’s what you ALL are…” his arm sweeps out like a sail in a gust of wind to indicate the entire workforce visible through the transparent walls of his office, “New staff. You’ve all had your liabilities reset; you’re all on three months’ probation as of now. And that’s just the way I like it. Back in control. Power regained.”

He adjusts his position; a quick flinch pinches his face, “Way I see it, where there’s mugs, there’s brass. All right? Promise them the earth with the rallying cry and then shit on them from as high as possible when they start thinking they deserve a bigger bonus or a better wage or working conditions,” he finger-quotes ‘working conditions’.

Criticality 5: The Iniquity of the Children