To me, he stood six feet ten, fierce, unyielding. Curly, black hair and quasar blue eyes gave him the look of a modern-day Blackbeard.

In reality, he reached five feet, eleven inches, although I had the inflexible part right. I agree, at eight years old, certain things loom larger when laced with fear and trepidation, but a day never passed devoid of unpleasant expectations. 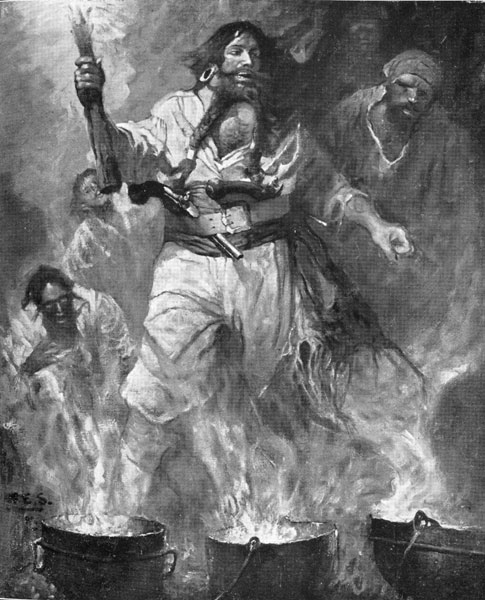 Second, to the oldest of four children, I remained the runt of the litter and the youngest girl. Nevertheless, a twenty-pound backpack rested on my skinny shoulders, and my father led the troop of six with a swagger up the mountain trail.

The only thing missing was the eye-patch and cutlass. Fifteen long miles. Dad’s version of summer vacation.

My foot slipped off the tenuous trail, and I almost went over the side, pack and all. Mother screamed, my brothers laughed, and father marched toward me face red from anger.

“What are you trying to do, lose half our supplies? We brought enough for two weeks out here. We can’t afford to waste any of it. Get your act together, and watch where you’re going!” He huffed his way back to the lead.

I looked at mother. She pulled her cap low over her brown eyes and shooed my brothers to move on. My sister stood in the middle of the trail ahead of me, eyes wild from fear.

The last thing I wanted to do was make father angry, and I had succeeded in doing exactly that. Blood oozed into my sock. My leg hit a large rock when I slipped, and I knew all I could do was trudge on. There’s no crying in camping.

I remember the hollow vacuum in the pit of my stomach, the raw emotion searching for a place to go. Instead, agony and despair found the entrance to the black hole and disappeared inside. Nothing existed now except the determination to focus on the trail, and the weight on my back.

Long ago I learned not to ask why father ran the family like a military operation, or why the mother refused to come to my defense. I knew the answer. Mother stayed in survival mode; her own. Father remained an enigma – his Navy experience at Pearl Harbor forever changed him. I stole a look at my sister. Three years older, her fragile personality kept her frozen in a panic state most of the time. No help there.

It’s painful to look back at my eight-year-old self and realize, in that short time, I’d developed a sophisticated method of survival. Alone within a family of six, the only thing TO do was endure.

Eventually, we arrived at the lake tired, hungry, and under no illusions, the trip had ended. Tents to erect, fires to build; no one eats until camp is set up. The job delegated to me was to hold the tent pole while dad pounded the stakes into the ground.

Weariness and hunger took their toll on my undersized body, and I let the pole lean too far to the right.

“Hold that pole!” he yelled.

Father stopped the hammer in midair when the aroma of pancakes drifted into our range. Darkness fell, and father delivered the last blow to the plastic spike. “Time to eat,” he announced.

Grateful for the warm fire my brothers assembled, we surrounded the flames and ate in silence. The pancakes tasted like Thanksgiving dinner. Tomorrow – a raft to build, and fish to catch and clean. Mother cooked, my sister cleaned the trout, and the rest of us took our watch at the fishing poles. If we didn’t catch anything, we didn’t eat.

Father taught us to brandish a pole, and fortunately for me, I’d learned my lesson well. I could cast like a pro and usually brought in as much as my father. But time enough to worry about fish tomorrow. Father’s orders sent us scrambling to our tents and a night’s sleep on the cold, hard ground.

Finally, in the dark camp, I could snuggle into the warm, downy sleeping bag, and drift off into my dream world. Disney Land, a cruise, perhaps, or a road trip to grandma’s farm. Riding horses, swimming in the lake, carefree and joyful. Anything but this.

I’m not sure what time I awoke, but the sound of the crackling fire alarmed me. I could see the shadow of a man at the tall flames through the tent canvass. Still numb from sleep, I couldn’t tell who it was. I crawled out of my cocoon and inched on my stomach to the door of the tent to peek through the hole at the zippered entryway.

The fire raged high, and I could feel the heat from inside the tent.

Why isn’t he asleep? He must be exhausted.

He sat down on a stump near the fire and cupped a steaming tin cup with both hands.

I watched him. He looked sad, forlorn, and vulnerable. The shadows danced across his face in the firelight. This candid look at my father stirred something deep within the neglected regions of my hardened heart.

A sudden shot of courage overtook my immature mind. I put my shoes and jacket on, unzipped the tent, and ventured out.

He looked surprised, and then a miracle happened. He smiled.

I…I heard the fire roar. I guess it woke me. What are you doing up?”

“Someone’s got to make sure the fire stays lit. The flames keep the animals away, AND mother needs it to cook breakfast in the morning. Wouldn’t do to have a cold breakfast to start our first day of fishing. It gets breezy on the lake.”

I looked at him square in the face for the first time. “Oh, I guess I never thought about it.”

“Sure, cocoa sounds good. Is that coffee you’re drinking?”

He reached for the pot and mixed the dry powder mix into the tin cup, all the while, shooting glances at me and smiling. “Here ya go. That’ll warm you up. No, not coffee. I like cocoa, too.”

I was stunned. Dad drinks cocoa. I thought he’d be too tough for anything but coffee.

We fell into silence, staring at the fire, and sipping our hot liquid. The cocoa warmed more than my body. Something akin to life filtered into my long forsaken heart.

“So, how do you like it out here in the wilderness in the middle of the night? Peaceful isn’t it,” he ventured.

“It’s different, but yeah, I guess it is peaceful.”

I looked at him and forced my lips to curve into a smile. When he grinned back, my lips parted and a full-blown laugh exploded from my body. It felt good.

“That’s more like it. I wondered which of my kids would be the first.”

“The first to want to get to know me.”

“You make it kind of hard, Dad. You’re so gruff all the time. Like a drill sergeant.”

He laughed at the reference. “That’s all I know. It’s the way I was raised. It pains me sometimes to see the fear in my children’s faces. All but yours. There’s something else there. Not fear. Stubbornness maybe.”

“Not mean, tough. Grandpa’s my step-dad. I never knew my real father. He died when I was a baby. Grandpa loved my mother, but only took me because mother insisted. He made it hard, never showed affection, not one drop of approval. In his eyes I was a nuisance. And later the war . . .” He stared into the fire, and I could see the hard line settle into his chin again.

“So you tucked it away, hid the pain?” I watched for an angry response, but he turned toward me, his eyes soft and moist.

“No. You never say it dad, never praise us, or tell us we did a good job. But let us mess up and ‘kapow’, we never hear the end of it.”

He stoked the dwindling fire, added a few more large branches, and let the night sounds take over the conversation.

After the last coyote answered its mates’ cry my father turned to me and said, “I need to change that, don’t I?”

“Better get to bed, girl. Big day tomorrow.  Want to take the north shore with me?”

“Sure! Did you bring the super-duper lure?”

“Wouldn’t fish for trout without it. See you in the morning.”

I stopped, and marveled when he stood and put his arms around my small frame.

“I love you, daughter. Always remember that. I DO love you.”

We fished side by side the next day- for the rest of the trip and every year after, my dad and I shared a campfire and cocoa at midnight.

The World This Day

Andrew Sacks Jan 30, 2022 7
Murder and Mayhem on the Parts of Speech Criticism of the abuse of the English language is, no doubt, nearly as…
Writing