It is winter of 1981 and David (a humanitarian worker) has just left the Beka’a valley in eastern Lebanon where he has visited Father Nicolas Kluiters S.J. (murdered there in 1985) and has checked out his water project financed by the American Charity (Catholic Relief Services).

David is anxious to cross Mount Lebanon and get back to his wife ( Pen ) and his colleague ( Mike) who are waiting for his return to his apartment in West Beirut. Lebanon has been occupied by Syrian Forces since 1975.

In the passage below, he has just arrived back at his home and is recounting his trip over the mountain. 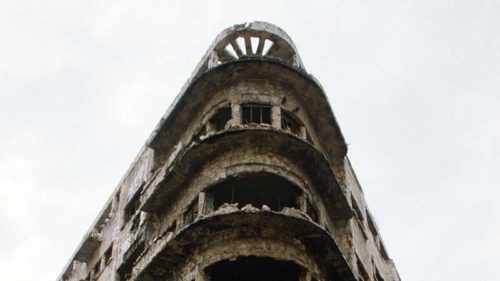 “Yeah, so once I left Kluiters outside the Palmyra I was driving hard, trying to get up the east side before the sun disappeared behind the mountains and down the west side before it dropped under the sea.

” Christ, as you guys know, I had nothing around me.  Talk about thin skin and brittle bones. Yep, this was the fucking Chevette and thanks to the delay with Kluiters I was already running late for the afternoon race down the slope to Beirut…bumping noses along the way with everything under the sun from armored vehicles to mules.  ‘God help me,’ I was pleading to the darkening heavens above as I went over the summit.

“No governance, not a scintilla” I had repeated several times that evening, just shaking my head before Mike and Pen.  But not before I had those two ‘helpings’ of Tequila which earlier had been forbidden to me at the Palmyra – as in an AK raised to my temple by the Iranians who now occupied the hotel.

“I mean Mike, you know, how the crashes just get left in the middle of the road till they get hit so many times that they eventually fall off and down the cliff.  And worse,  here I am forced to hurtle” … and I turned to Pen, saying “and you know how I hate to hurtle. Damn it…am forced to hurtle” … and I am taking another shot of Tio Pepe, rapid fire, and stuffing some hummus in my mouth … “and hurtling down because I have a Mercedes on my rear bumper and I am sandwiched between, and you won’t believe this Mike” – who is cracking up – “between a fucking dump truck on my left, which is now beginning to hurtle past me, and which has a faulty trap and is now, because of it, spewing garbage in its wake and, God love me, someone – and only in Lebanon, I mean no-one back home would believe it – because some sheeting has blown out of the dump truck – I can see it in my rear mirror – and is now plastered on the Mercedes’ windshield and, God help me, the guy in the Mercedes now has his arm out the window and is shooting at the back of the dumpster… and on my right – and I’d say lanes but there are none – is a deuce and a half carrying Syrian soldiers on benches in the back which I am now just starting to pass and they are all laughing, while now fog starts to infiltrate and brings my greatest fear – which is of dark.

Because I know these cars don’t have lights that work – and there, at that moment, dumbstruck as I am, I spy an apparition rising in the mist, slowly taking shape before my eyes – I know you won’t believe this – a fucking tin-pot Deux Chevaux … and it’s coming up out of the fog, right for us.  Well, when he sees the three of us abreast coming down on him, he veers off into a ditch, thanks be to God, on the mountain side and not on the cliff side and the Syrians swerve and just manage to miss him and then pull in front of me to a stop – I guess to help him – which forces me to stop too.

And the poor guy is now actually weeping and thanking Allah and alternately the soldiers who then decide to block the whole road off – this major artery between Damascus and Beirut – so that, with many comic mishaps, they can finally push him out on the road to continue his journey toward actually meeting Allah, I believe, probably this night.  And the horns behind the Syrians are now a wild cacophony, except for the first two rows, which can see clearly all the Syrians and their weapons and are meek as can be and then I … or rather they spot me trying now to edge around the deuce and a half … and here my heart sinks, since they ask me to get out and are completely amused that an American would be driving around the Beka’a making investments, as I described my projects…which I don’t think they believed or at least not the one who had some English and so he calls over a captain – and I am remembering what you told me Mike – which is that in situations like this, officers are good.

And so I tell him my story, dropping names fast and furious of every notable we’ve ever helped, from President Sarkis on down.  And he just keeps me standing in front of him, with his troops watching very appreciatively how he is controlling this ‘American’ situation, and I am watching equally appreciatively the position of the sun, knowing that I definitely don’t want to make the run across the green line in the dark.  And then, I guess he figures he has toyed with me enough but wants to give his men a little more. So he waves over the guys who initially approached me and I am guessing now, he asks them about whether they’d like to trade the benches in the back of the truck for some seats in my car.  And I am gathering they are answering in the affirmative … and I am deciding not to add to this absurdity by evoking the agency policy against picking up hitchhikers.  And soon there we are – five of us smushed into the Chevette and with my seat pushed all the way up and the soldier next to me quite expansive.

I am now once more ‘hurtling’ but with my knees up against the steering wheel and my arms pressed to my side … while this English speaker has his muzzle pointing in the direction of my ribs and the Syrian in back, I am guessing, has his aimed at the back of my neck. And I am one” (not wanting to really introduce this subject and so here I spoke a bit quietly out of reverence for the shrapnel still in my gut from Chu Lai), “definitely one who is carrying no illusions about what that muzzle velocity does to flesh and blood and I am very much in fear’s grasp.  And this English speaker is telling me about how he is related to several important officers in the Syrian army – swaggering like this, all the rest of the way down the mountain and into that cloud of fumes that now is hiding the city and then into it – dimming ever more in the failing light and then the guy next to me gives me some directions and at this point I am helpless since I don’t know where they might be taking me, under instructions or not, and frankly I am just praying – such as I pray.

And then abruptly he says ‘here, ’ and I stop and they just get out without even an acknowledgment for the ride.  And there I am, left feeling like the luckiest guy ever as I face the dash home across the line, which given, I guess, my…” here I took some more tequila and searched a bit for the right word.  “I mean I guess what it was … was that I felt a bit powerful after making that race down … maybe a little like the way you strutted a bit after the first time you actually got up the nerve as a kid and did the Cyclone.  I mean afterward, I just ran the green line, snipers notwithstanding, quite cool, actually singing that song about six days on the road and I am coming on home tonight.”

And I collapsed…which is what often happened after a tear like that.  The verbal one.  And frankly, which, I could tell endeared me very much to Pen since this seemed to be not far away from what she had wanted to marry.  And as for Mike, it had also made him quite happy and had caused him to accompany most of the run with sympathetic laughter.  Quite happy, I mean, because he had been alone with this type of fear for a long time after his friend had been killed and before Pen and I had arrived, and now it was just what the doctor ordered for him to be sharing hummus and shots, limes and labneh and flatbread – all of us, for the moment quite safe and sound.

This is an excerpt from ‘Charity in Lebanon,’ a new book (non- fiction) currently under construction by David Holdridge,
Author of The Avant Garde of Western Civ, recently published by Press Americana.