Some soldiers can’t adjust to life back home, so they sign up and return to active duty combat.  In 1969, my cousin Michael left the jungles of Vietnam and chose the concrete jungle of Hell’s Kitchen, New York to live and work.

West 48th Street, between 10th and 11th avenues, at that time, was certainly a war zone.  Empty and crumbling buildings were a refuge for junkies, prostitutes, and criminals.  The streets were not safe. 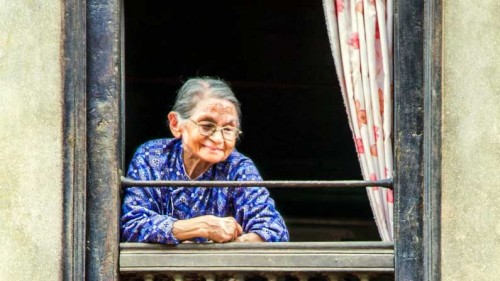 Michael was part of a Christian Brotherhood, who moved into a city-owned building and bought three apartments for $150.00 each and combined them into one.

Squatters occupied the rest of the building. Arson was always a threat. One day they watched the entire wall of a neighboring building come crashing down revealing bedrooms, kitchens, and bathrooms as if an orange had been peeled.

Gangsters ruled Hell’s Kitchen from barroom stools, and empty lots were strewn with garbage and infested with rats.
The Brother’s, former warriors, would not be intimidated and little by little they began to reclaim the West Side – brick by brick – soul by soul.
Little known to today’s residents of East 48th Street, there is a plaque on a wall dedicated to a very special woman who through her street front window happily lived through it all. Her name was Mary Carpenter – and she was paralyzed for life.

Every day, and all-day she lay by her open window and greeted all passersby with a smile and a cheerful hello, words of encouragement, and an ear to listen to those in need of a friend or a confession.  Physically, nobody had it worse than Mary Carpenter, but spiritually nobody had it better.

My Cousin told me about the plaque in 2012 honoring St. Frances of Clinton, and I just had to go see it for myself and feel the presence of this special woman.

Today West 48th street is a beautiful tree-lined street where mothers push baby strollers, and the once filthy needle-drug lot is now one of the most beautiful neighborhood parks in the city. I saw children playing, women reading and father’s barbecuing.

I looked back at Mary’s window from the park and the apartment building where my cousin and his brothers lived and felt nothing but hope and pride and glad that my cousin was in my life and that he shared this story with me.

I also felt that I had gotten to know Mary Carpenter and was a better person for that and my problems in life would always seem smaller when I held her life story in my heart.

Many of New York’s greatest stories have been paved over with time. This is one that should be told over and over again.
I decided to take one last photo of the plaque.

As I raised my camera, a man walking his dog approached and asked me what the plaque was and that he had lived there for 25 years passing it daily. I told him about Mary and Michael and what it was like then.

sara tutorsindia Jan 8, 2020 0
Assignment Writing Assignment writing is a mandatory part of universities that can be challenging and involves…
Publishing