They are perfectly lovely men, all of them, such a sweetness.
I really like them! I do.
Oh, if we could only just get along, have a warm and fuzzy and go about our day, but there is a problem.
These guys are fucking MONSTERS!
The things they have done in the name of the empire would make your blood run cold,
your eyes weep for the victims of their crimes against humanity. 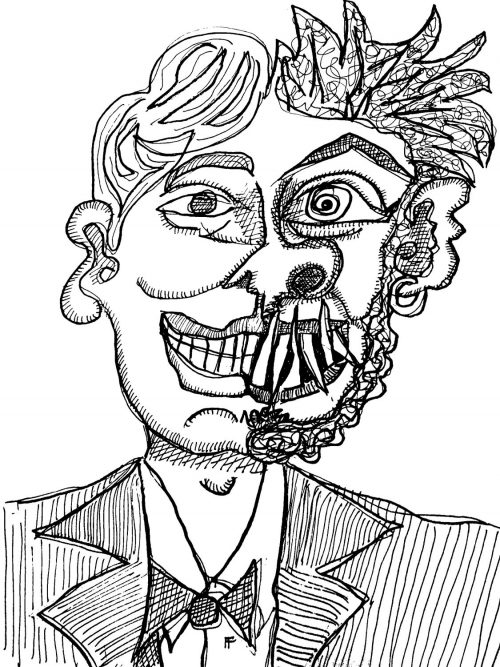 But now, tonight, as one stands up at the podium, making with witty repartee, he looks like such a good guy. I really like the bastard. Am I out of my mind?
Look how sweet his wife smiles at him standing there as he introduces the ceremony, the gala event.
He seems so charming and well, I’ll say it again—such a good guy.

Meanwhile, the bombs are falling where they said they wouldn’t bomb because it’s against international law. The bullets are flying where they said they wouldn’t fire them because we’ll never be the aggressor. And all the while those old show biz icons flatter them, play golf with them, why they’re pals, they’re bosom buds. With the ones who follow the marching orders to fire the guns and drop the bombs.

Still, I want to think it over, maybe I am wrong, maybe I was fed a lot of lies.
Maybe.

I am having trouble believing this. I am having a lot of trouble believing—Oh look, he just made a funny. They’re all laughing—I’m laughing. Such a charming-
Wake up, you idiot! Don’t believe what you are seeing. They are experts at acting like this, they are politicians, the front men for the war machine economy with its higher taxes and lower incomes for us down here on the ground.

He’s all dressed up in his black dinner jacket and sporting his pearly smile and he is the best-dressed monster I think I have ever seen. It takes his kind to climb the slippery ladder to the top of that pile of bodies laid waste by this administration and the others before it.

If I could only be a good man and do the right thing. If I could only face up to the horrible reality these monsters stand for. But now in this weak moment, this human moment, I so want to believe he is such a good guy, a wonderful person, and I too could join those celebrities for a round of golf and crack jokes with them. Hang in their crowd because I believe we are doing the right thing, as they do. Those bombs and bullets are necessary for our empire. Grow up and accept it.
You know? How things really are done, in the real world.
Right?

10 Amazing Tips For Radiant And Flawless Skin During Winter

Knocking at the Door