Everyone got up in unison, I mean everyone at exactly the same instant, all 22 of ’em, like they were one mind like they had no mind of their own, they all got up from their computers and rushed over to the balcony to look at the floor below. 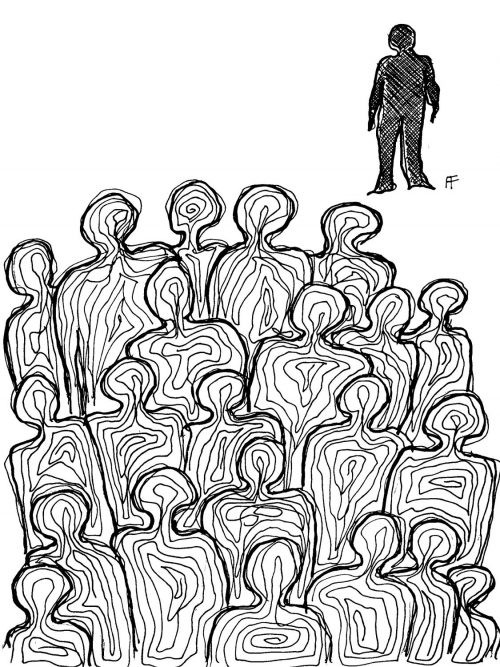 There was a homeless man screaming and security guards were subduing him.
He was loud.
You could feel the violence in the air, thick.
And these group minders looked down at the incident.
Finally, a librarian came along and, just like they were children,
she told them to return to their seats.

I mean what the hell? How can all these people respond in perfect unison?
What is controlling them? What kind of individuals are they?
And how individual?
They are so much the same, so much so, that I don’t think we can call them separate,
certainly not from the others.
I could not live like that.
I would jump off life’s merry-go-round if I followed what EVERYBODY else did.
What would be the point of so many living when really all you would need is one person since all the others are doing the same thing. Why need more than one to do it?

No way—I like individuals, crazy tormented unique off-beat unpredictable mavericks of the sane in an insane world. The misfits and anomalies and anomalousness in general, yeah give me an extra helping of unusual and recusant, topped with a little unorthodoxy and a side order of heterodoxy. Bring on those dissidents and dangerous free thinkers.
Let’s upset the apple cart of conformity.

Let’s trip through those tall tulips, smell a few, and call out to the sun,
madness is a social decease, its worst form has the most respectable facade of conformation.
Ossification is the rigid sentence of a boring life to die long before being dead.

So if this is you and you say you can’t help it,
I say you will live an accepted, secure, adapted, existence, but not one of being alive.
Not of the stuff that makes breathing worth it: discovery, passion, creation, the belief in your own decisions and your unique character which brings you face to face with destiny.