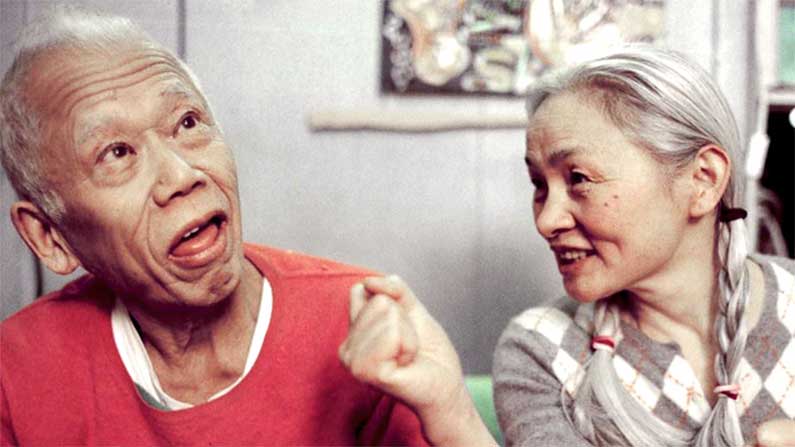 Cutie and the Boxer is a 2013 American documentary film by Zachary Heinzerling and tells the gripping story and the chaotic 40-year marriage of the boxing painter Ushio Shinohara and his wife Noriko Shinohara.

Bang! Pop! Slam! With boxing gloves soaked in paint, a wiry, bare-chested man with swimming goggles punches at a room-wide, person-high canvas. Color Blobs flying, sweat mixing with colorful splashes. Pop! One last firm left. Slowly the canvas bleeds. The man turns around. A delicate-looking woman with gray braids takes the goggles from his face and removes his gloves.

In a burst of a few minutes, the eighty-year-old Japanese painter-sculptor Ushio Shinohara has been one with his creation.

His glance wanders along the Rorschach stains on the canvas, to meet his wife Noriko’s. And Ushio’s facial expression, oscillating between contemplative and rogue grin, says art is a necessity. The life of Ushio Shinohara is intense and uncompromising.

In 1969, he moved from his hometown Tokyo to New York, where he encountered the twenty years younger Japanese Noriko, in his studio. A unique union was born.

Cutie And The Boxer is a Chronicle by Sundance-winning and Oscar-nominated rookie Zachary Heinzerling. Initially, Heinzerling intended to do an interview of thirty minutes, but he repeatedly adjusted the length and structure of the film.

In a bold move, he pushed all the interview material from the first three years aside. The more Heinzerling realized what golden objet trouvé presented itself here, the prosaic question-answer structure appeared inadequate to meet the dynamics of the catch.

That Ushio Shinohara, self-proclaimed genius and ruthlessly in his art, has been able to save himself through the decades is due to a single person: Noriko. She loves him unconditionally, accepts his madness and parries his mood extremes. She survived Ushio’s alcoholism, interpretations, cooking, chores and vié de bohème in their continued struggle to make a living.

More and more, Ushio’s better half Noriko grows from her limited role of caring factotum who has effaced herself out of love, to become an artist in her own right. During her odyssey with the unguided projectile Ushio, she begins to paint a strip-like series of impressions – Title: Cutie and Bullie.

The lasting impression from this loving double portrait of Cutie and the Boxer is the image of two infectiously vital and creative people who cannot live without each other, and continue to play, regardless of counter-flow, age, character defects, and painful blows. Of their lives together ​​Ushio and Noriko have made nothing less than their ultimate artwork.

I Drank His Blood