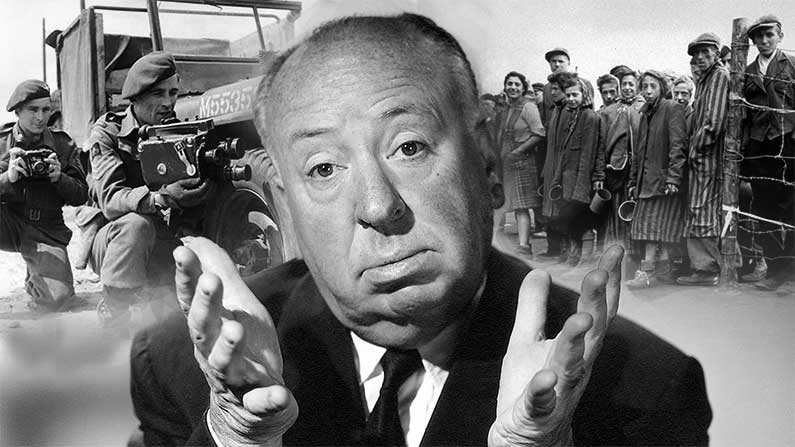 The liberation of the Nazi concentration camps has been extensively filmed. Commissioned by the British government, a team led by Alfred Hitchcock shot many hours of film, which remained unfinished and ultimately forgotten.

Seventy years later, it was picked up by André Singer, who made the documentary Night Will Fall (2014).

Night Will Fall shows the liberation of the concentration camps in late 1944 and early 1945 and features interviews with the last witnesses, aged cameramen, and survivors of the camps. Singer managed to restore and complete Hitchcock and Bernstein’s movie.

It also accounts for the discovery of film footage that turns out to be a lost documentary shot by Alfred Hitchcock and Sidney Bernstein in 1945 of the liberation of prisoners from German concentration camps.

When the Nazi camps were liberated in the spring of ’45, the Allied Forces decided to document scrupulously what they considered to be indescribable proof that the Holocaust had actually occurred. In several newly liberated camps, cameramen of the American, British, and Russian army made many recordings that later, during the trials of war criminals in Nuremberg, served as unquestionable evidence.

On April 15, 1945, when British soldiers discovered and released KZ Bergen-Belsen, the British government sent film expert Sidney Bernstein to do a survey. Bernstein led the department of psychological warfare in London and also made propaganda films.

Now he was commissioned to make a movie from the raw material shot in Bergen-Belsen and elsewhere so that the Germans could not deny their document, the ‘German Concentration Camps Factual Survey.’

As a producer well-connected in the world of film, Bernstein approached his friend Alfred Hitchcock, who already had an excellent reputation at the time. His name would give the project the necessary prestige.

Even Billy Wilder was engaged. As a Jewish-Austrian immigrant to America, he fled the Nazis and began a career as a film director. He was also a soldier and made propaganda films for the US Army. Wilder, whose family had been killed in the camps, came to Europe and edited from the material that was shot by cameramen of the army, a shortened American version: Death Mills (1945).

One of the cameramen, 91-year-old Arthur Mainzer, who filmed the liberation of Buchenwald for the US Army, says he is still traumatized by what he then captured on celluloid.

With only post-production to complete, the project was abandoned after a few months, and five rolls of film material disappeared in the archives of the Imperial War Museum in London.

Almost seventy years later, they reappeared. André Singer, in the nineties Chief Documentary at the BBC and producer of Act of Killing (2012), assembled a 75-minute documentary from the surfaced material. Night Will Fall (2014) was televised worldwide on the occasion of the seventieth anniversary of the liberation of Auschwitz-Birkenau, also Holocaust Remembrance Day (27 January).

André Singer became aware of its existence when his producer informed him that the Imperial War Museum, by chance, discovered the film material through an inquiry of Bernstein’s descendants. He immediately recognized the importance and potential of the material. It was the last opportunity to tell the story using still-living witnesses.

Maya Kavita Oct 26, 2010 0
Take It - It's Mine Remember plagiarism? Remember how bad it was to copy some else's work without duly…
Book Review