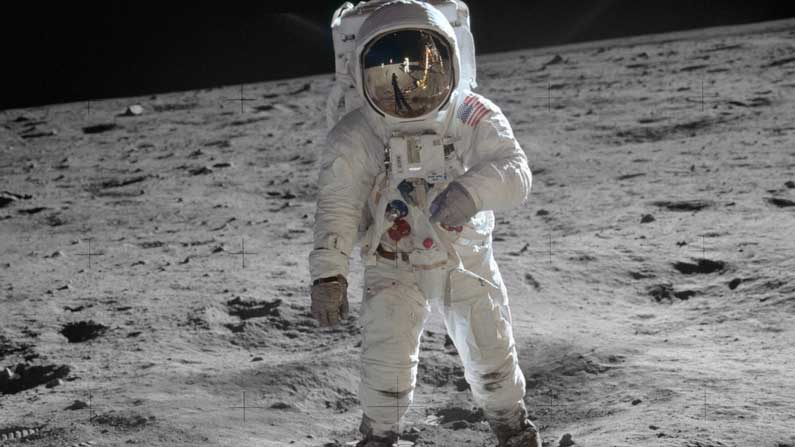 French director William Karel’s ‘mockumentary’ Dark Side of the Moon (2002) demonstrates that documentaries always show the truth of the creator.

In 1969, Apollo 11 astronaut Neil Armstrong, the first man to walk on the moon, said, “That’s one small step for a man, one giant leap for mankind.”

However, there were skeptics like the French filmmaker Jean-Luc Godard

, who said he immediately knew that the pictures were fake. In the mockumentary Dark Side of the Moon (2002), filmmaker William Karel supports this argument.

“What we saw was not filmed on the moon, but in Hollywood! It was Werner von Braun,

who first realized that the moon landing was supposed to be entertainment, a show!”

And therefore, NASA decided to enroll Stanley Kubrick, who, out of gratitude, was rewarded with a unique set of NASA lenses, which he used a few years later for his film Barry Lyndon

Among various interviews, we also see Kubrick’s widow have her say. “Stanley had always had a fascination with space travel, and his science fiction film 2001: A Space Odyssey

(1968) had much acclaim in NASA circles because of the realistic impression of space.”

Kubrick went to Hollywood to build a giant set, which was to represent the Cape Canaveral launch site, where the moon rocket would be launched into space.

“We had to,” says one person involved, “because we were afraid that the Russians would beat us to it.” And yes, if you look at the images as if Kubrick made them, and you see Armstrong hopping on the moon, then you may start to see the hand of the director. Now, how about the American flag waving smugly while there is no air, so also no wind, on the moon?

Moreover, says an expert, extreme temperature changes on the moon would have ensured that the camera would be inoperable. In short, there is no doubt that the man on the moon was a hoax. And yes, now we understand why Neil Armstrong never wanted to give interviews!

None of the interviewees knew that William Karel would use their quotes for a film of this scope – they all thought the interview was for another documentary. So Karel shows that you can go in all directions with your recorded material. Mockumentary

Dark Side of the Moon is not only funny but shows that the manipulation of images creates its own reality.