“We packed our bags and left for home,” Recalled Alice. “Robert was driving with children in the back seat. As we drove home my son and daughter started a war of words. I don’t remember what they were quarreling about; it’s been ten years. Robert was tired; the brother-sister fight was irritating him.”

He sternly asked them, to knock it off. They were quiet for a few minutes, but after a while they had something else to quarrel about.

I turned back with a finger on my lips, showing them to be quiet. It didn’t work; they became louder blaming each other for starting it. 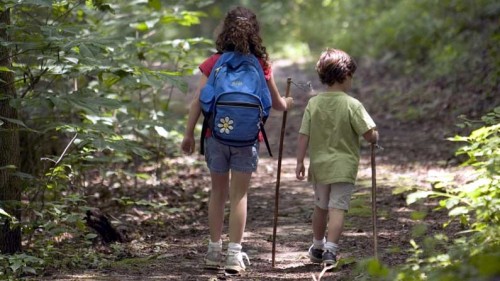 Robert sat silent, waiting for them to get out of the car. I was also surprised but said nothing. The children panicked, “how will we get home?” Robert sounded soft but firm, “if you don’t know how to behave in the car, you have to walk!”

Rose was listening to Alice with interest; she smiled and asked. “And then what happened? Did Robert make them walk home?”

Alice laughed and said. “Robert drove off and stopped about a mile ahead. We waited for the children to arrive. Both of them were weary after walking for twenty minutes in the afternoon sun. They sat quietly for the rest of the journey. Since that day they never quarreled in the car.”

Rose bursts out in laughter “I bet they didn’t! How old were they?”

That night, after dinner, Rose told the story to her husband Sam, and they both had a good laugh.

A few weeks later, Rose and Sam were returning after a great lunch at a friend’s place. Their kids were arguing in the back seat and fighting with each other. Sam decided to teach a lasting lesson to his twelve and fourteen-year-old kids. He pulled the car over and made the kids get out. “Now walk home. This is your punishment if you cannot behave in the car!”

The kids were saying “sorry” and promised to behave, but Sam was adamant and wanted the lesson taught. He drove forward for about a mile and stopped by the roadside smoking and waiting for the kids to catch up.

Thirty minutes passed by kids did not turn up. After forty minutes, Sam and Rose got out of the car and looked back as far as they could. There was no sign of their kids.

The kids should have caught up by now, they panicked at the children not showing up. Sam’s hair stood on his head in alarm.

They drove back looking on both sides of the road to the point where kids got dropped. There was no trace of kids anywhere. Both their faces turned white with concern and stress of the unknown. Where did the kids go?

Rose was tensed, “Sam. That was a bad idea! The children are missing. Should we call the cops?”

Sam took out his mobile phone, his hand trembling. Just then there was a sound of a message arriving.

“Who texted that?” Rose cried.

Sam’s heart was beating so fast; it felt like it had moved up his throat ready to come out of his mouth. He said, “Dick!”

Sam read out the message loud, “Daddy we called grandma and got a lift home. When are you guys getting back?”

“Oh, thank God!” Rose exclaimed, her hand on her chest.

They got in the car. Rose laughed a little to herself, “We forgot that the kids had mobile phones.”

Sam looked at the road as he started the car.

Rose murmured, “I guess even parenting has to move with the times!”

alanplace1956 Aug 11, 2020 0
What are Ghostwriters? A ghostwriter is hired to write literary or other texts that are officially credited to…
Publishing