In Luke Andreski’s attractive home in Bristol, UK, we drink Earl Grey tea while gazing out over Redland Green park. We have been discussing the e-revolution in book publishing generally, but now we approach the subject of the Dark Green Books Short Film and Video Competition.

William T: Dark Green Books have recently launched a short film and video competition based on your work, offering $1000 in prizes. 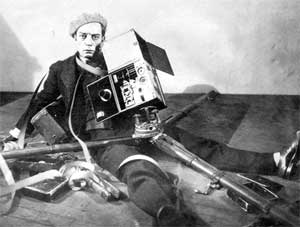 Luke A: Yes. The Dark Green Books Short Film and Video Competition was launched on 1st June 2012 with the release of two short films by Gregory Metcalfe. These provocative films can be found on YouTube, and have already been extensively viewed and ‘liked’.

Can anyone enter the competition?

Given the sometimes controversial nature of my work we decided to restrict submissions to competitors aged eighteen or over. Other than that, the competition is free and open to anyone, amateur or professional, anywhere in the world.

What sort of submissions are you looking for?

We are looking for short films or videos which powerfully evoke the themes or sentiments expressed in my work. They must be films offering either impact or insight but which, in either case, are rooted in the piece of writing that the video-maker has chosen to reflect. The seventeen works covered by the competition are all available for download from www.lukeandreski.com but submissions can also be based on the free extracts available on my website and the free soundtracks available on Soundcloud. Nine of the works are also available on Amazon.

Who will be judging the competition?

The judging panel will be announced in October. The panel will include a well-known novelist, a poet and a film-maker.

Will there be a shortlist?

There will be both a long list and a shortlist. Long listed submissions will be displayed on the Dark Green Books competition channel. The long list will be announced on December 20th and the shortlist in January.

Is this competition effectively a notice board for your work?

An astute question, to which the answer is “Yes… but only in part…”  Dark Green Books, the Limited Edition and eBook publisher of which you and I are both co-founders, are hoping that not only will this competition bring new readers to my work but that it will also generate a number of unique and powerful videos which will be works of art in their own right – bringing new and promising video and film directors such as Gregory Metcalfe and Steve Le Mare into the public eye. We also see this as a template for future competitions based on more than one author.

And now to the prizes…

The prizes are $700.00 for the winning video, $200.00 for the runner up and $100.00 for the third best submission. Plus a number of free downloads from www.lukeandreski.com… I have always treasured the first check I ever received for my work (twenty-five years ago?!) for £50 sterling – and one of the most enjoyable outcomes of this competition will be to hand people checks which are almost more fun framed and hung on their studio walls than spent!

We finish our tea, and then the discussion moves on to the conflict between economic wellbeing and the environment – a subject close to our hearts. ‘And your new book, which is all about this conflict?’ I ask. Luke looks pensive. ‘Progress is slow – but I hope to publish the next instalment of Green Messiah in August.’

Competition rules and submission guidelines for the Dark Green Books Short Film and Video Competition are available via shortfilmandvideoaward.wordpress.com.

The first instalment of Luke’s novel, Green Messiah, can be found at www.lukeandreski.com.