When Vera Menchik dominated women’s chess in the late 1920s and through the ‘30s, she was thought to be almost a type of chess anomaly that could never be repeated.  So strong a player she was that she was invited to and participated in a number of Grandmaster men’s tournaments, scoring respectably.

Her dominance of the Women’s World Championship tournaments and matches of the era was so complete that then-current men’s World Chess Champion Alexander Alekhine opined that it was “unfair” for the Czech-British player to compete in these events.

In the decades following her untimely death caused by the German bombing of England during World War II, it certainly seemed that no woman would again attain such heights in the chess world.  But that was before the “The Polgar Experiment.” 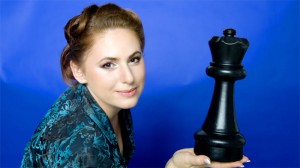 The Polgar Experiment?  The phrase seems somehow sinister and may bring to mind either the Manhattan Project or a number of pedestrian science fiction film entries of the 1950s.  In actuality, though, it was a program for the chess education and development of children, which was conceived by, and implemented on, his own three daughters by Hungarian Laszlo Polgar, a strong chess player, chess book collector of thousands of volumes, and previously successful and respected chess teacher.  The “experiment” involved intensive daily chess training to accompany traditional schoolwork, and the project turned out to be more successful than probably even Papa Polgar dared to imagine.

All three girls, Zsuzsa, the eldest, next Zsofia, and then Judit, the youngest, all quickly reached Master caliber playing level, and then international competition level, all while still in their teens.  Zsuzsa (usually Anglicized Susan, its English equivalent) became the first woman to gain a Men’s International Grandmaster title in the traditional manner.  She reigned as Woman’s World Champion for years.  The middle sister, Anglicized Sofia, attained a Men’s International Master title in addition to a Woman’s Grandmaster title (the latter honor somewhat less challenging to attain than its male title counterpart).

But it was the youngest, Judith (the English equivalent of her birth Judit), who ascended the pinnacle and became by far the strongest woman player of all time.  Born in July of 1976, at 15 years, 4 months of age she became the youngest person ever to achieve a Men’s International Grandmaster title, surpassing the old record of American prodigy and later World Champion Bobby Fischer.  She decided early to bypass women’s-only tournaments and matches, so she never secured the title of Woman’s World Champion, although her rating has for years now been much higher than any woman (including Ms. Menchik) who won that title.  Judith plays only with the big boys, and they have learned to respect and to fear her aggressive and tactically sharp play.

Judith’s tournament victories and impressive individual conquests over the past 20 years are far too numerous to list here, but suffice it to say that in 2005 she was ranked number 8 in the world (among all players) and included in her tournament conquests in individual victories have been then-reigning World Champion Garry Kasparov, later World Champion Visnathan Anand, and former World Champion Anatoly Karpov.  The only female player to have defeated a Men’s World Chess Champion in a rated game, she has beaten a total of 9!  For years now, she has played only in elite “Super Grandmaster” tournaments and a few international team matches, all by virtue of her invitation because of her extremely high rating and her previous stellar results.

In the past several years, she has married and started a family, causing her to experience two separate chess layoffs, which in turn resulted in some performance and subsequent rating decline when she returned to the board, understandably a bit rusty—yet her current ranking is high and steadily approaching its former height.  She is currently active in tournaments and ranked 31st in the world at the time this writing, having gained rating points in three successive recent tournaments as she recaptures her peak form of the early 2000s.  In the Chess World Cup, held in September of 2011, she reached the Round of 8 in this 128-player knock-out match tournament, along the way disposing of the event’s number one seed, Russian Grandmaster Sergey Karjakin, the world’s 5th highest rated player at the time.  She is back with a vengeance.

In America, we live with cults of celebrity, but chess Grandmasters are not among the sought and followed.  They are not, for example, recognized at airports and hounded for autographs.  Yet in some parts of the world, it is different.  Judith is a national heroine in Hungary and is widely known, recognized, and admired in most European nations as well as in Russia and other locales.

Perhaps it would ultimately make more sense to feature stories and updates on Judith Polgar in the weekly and monthly periodicals we find assailing us everywhere from newsstands to supermarkets, rather than tales of the latest flavor-of-the-month minor movie or television celebrity we are crazy for in February but have forgotten by August–for here is a young woman who has forged a distinctive and indelible impression on the most intellectual and challenging of all the world’s games.