Why is it that in this modern era, so many extreme Islamists believe that ancient monuments representing many other religions, are somehow offensive in the eyes of their version of God?

Take what Taliban extremists did to the Buddhas of Bamiyan in Afghanistan as one glaring example of this completely nonsensical and baffling mindset. 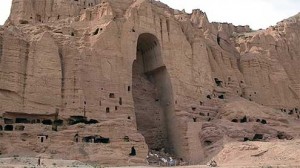 Whether you are deeply religious or not, acting in such a way can never be condoned. Over the last few years an ever growing number of mindless acts of vandalism has occurred, carried out by various Islamic extremist groups (who it could be argued have a medieval Crusader mentality when it comes to other religions) across the Middle East and in countries bordering the region.

Now we hear that Al Qaeda backed religious extremist groups have desecrated former religious buildings in Mali, citing the fact that they are an insult to the Koran as the reason for their senseless acts of destruction.

In Egypt the authorities are extremely concerned since veiled threats by small groups of religious extremists within the country threaten Egypt’s world famous ancient monuments like the pyramids.

Can you imagine anyone in the west getting away with destroying a church, mosque or synagog these days? I can’t. How about a national monument like Westminster Cathedral or an ancient site like Stonehenge, or the long lines of Menhirs at Carnac in northern France, will they be targeted at some time in the future by these clearly deranged individuals?

If anyone tried to commit such an act of mindless destruction anywhere in the western world, they would simply be arrested and sent for trial before being incarcerated in prison for a considerable part of their lives.

What will it take to prevent these people from carrying out their mindless threats? Should we care? Yes of course we should. Statues like the Bamiyan Buddhas and other religious artifacts are part of a country’s rich heritage. Markers in stone if you will. They are certainly solid reminders of earlier periods in a nation’s history. Instead of wanting to destroy their past, they should be proud of it…

Jack Eason Sep 21, 2013 6
For anyone interested in how a story evolves and for those among you who took the trouble to read my post the other…
Featured