A guy friend, and as of yet undiscovered relationship advice expert, recently shared with me three words that he considered to be the Kiss of Death to any and every relationship.

With a sinking feeling in my stomach, I faced my friend and braced for these apparently crippling words.  “Can we talk?” were the supposedly horrific words that assaulted my ears. 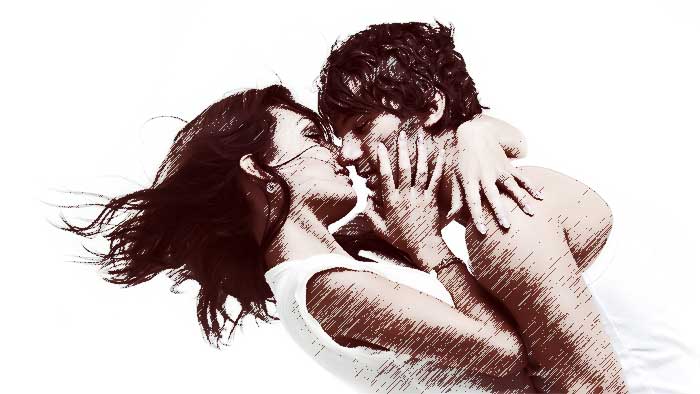 According to this self-proclaimed expert of the male psyche, men dread these three little words like the plague.  Seriously?  I remember my son, seventeen at the time, calling me out of a staff meeting with the words, “Do we have glass coverage?”

Those words seem much more evocative to me than “Can we talk?”  Those three words certainly had not proven lethal for Joan Rivers.  Quite to the contrary, Ms. Rivers found professional success coining that phrase.

Continuing to listen to my confirmed-bachelor-turned-personal-relationship-guru, I began to realize it wasn’t the actual words that made men shrivel and seek shelter.  Rather, it is the emotions that almost always accompany the innocent words.  Ladies, this is important.  Men are not prepared to face a barrage of our emotions.  They would rather walk into battle armed with a water pistol than sit down with their partner and discuss relationships’ issues.

So, how did Joan use these words to garner success?  She splayed the conversation with humor.  In other words, she removed the emotions.  She did not immerse her listeners with an onslaught of accusations, levy any guilt, or dole out a laundry list of honey do’s to her unsuspecting audience.  In direct contrast to what we view on the absurdly growing number of reality shows, most people’s lives are not made for tv.  In reality, we are not able to infuse every conversation with humorous banter and even more importantly, we shouldn’t rely heavily on drama.

To be taken seriously and listened to, really listened to, women need to focus on the facts.  Emotions are all well and good, but when we are negotiating with the opposite sex, we need to downplay them.  Otherwise, our partners will be paying attention to our tears and our volume and miss the real message in our words.  They’ll quickly grasp that you are unhappy, but they’ll miss the reason why.  If your relationships have been anything like mine, you’ll notice that you’ve had to repeat yourself, have the same conversations again and again through the years.  That is because we were ultimately speaking two different languages.

It isn’t time to throw away all of that womanly intuition.  Instead, use your gut as a guide and back up that initial emotion with fact.  Let’s see how this can work.

$25 Steaks
I was upset one ordinary Sunday because I’d assumed that my husband and I would have dinner like we did every other Sunday.  I went to the local organic store and spent $25 on steaks.  I also bought other goodies to make dinner special.  Unfortunately, my husband’s plan didn’t line up with mine.  As a matter of fact, he didn’t even have a plan.  While he was coasting along at the race track, I was busy taking my mother to church and to visit an infirmed relative.  Then, I shot over to the market and back home to do some strenuous yard work, all the time planning a spectacular dinner.  Dinner time came and went and by the time my husband finally called, my Super Woman tights were stretched thin and my panties were in a bunch.  From zero to sixty in no time at all, my emotions were rolling.

Looking back at the situation, I can now see that it wasn’t the missed dinner that was at the core of my displeasure.  Dinner was just the catalyst for my detonation.  My displeasure was more from my Super Woman tights being stretched so thin that they were starting to cut off circulation.  I was so busy serving everyone else’s needs that I was neglecting my own.  At least, that was how I viewed the world at that point in time.  Based on this world view, my emotions included feeling unappreciated, unimportant, taken advantage of, and plainly overworked.  The emotions that erupted were anger and its kissing cousin, frustration.

My husband never had a chance.  He was enjoying his day at the race track and was expecting a nice relaxing evening before facing the grind on Monday.  He wasn’t prepared for the ambush of my emotions.  He was too busy deflecting and protecting himself from what his person immediately recognized as a danger to ever hear what it was I was trying to say.  For that matter, I’m not sure what it was I was really saying.  I was emoting.  I wasn’t communicating.  It might have been a release for me, but it wasn’t a pleasant one as I wasn’t enjoying it and neither was he.

What  can we learn from this dynamic exchange?  Two things.  First off, Super Woman is a fictional character and as I mentioned before, most of us don’t live lives made for tv.  The second thing that I learned from this mostly internal conflict was that I had to change the way that I communicated with my husband.  In my younger days (prior to the encroachment of menopause), my habit was to suppress my feelings until they reached a bubbling point.  Fortunately or not, I only reached a bubbling point a dozen or so times in a 29 year relationship.  My habitual suppression of emotions left my husband quite unprepared for our 30th year together.  It was a milestone alright.  It was the year that I learned to express myself.  I was like a toddler, telling it like it is without any filters in place.  I remember cringing when my young son would share truths with unsuspecting friends and family.  In a similar manner, I was beginning to shower my husband with newly heartfelt emotions for which he was not equipped to handle in any way, shape or form.

I needed to reign in my emotions and formulate my words in a manner that would be easily digested by the male species.  I recognized that I wasn’t ready for prime time yet.  When I became liberated, I displaced my filters.  The old ones didn’t suit me any longer, but I had yet to assimilate new ones.

Just like a child does when first learning to control her emotions, I’m remembering to take a deep breath (or two) and then speak my mind.  Emotions aren’t center stage anymore.  They play a different role now.  Emotions provide the fuel, empowering the words that tell my story and by focusing on the words, I can ensure that the right message is being heard.

My husband, like many men, is in love with cars of all shapes and sizes.  As a result, I find myself often defaulting to the use of car analogies.  In keeping with that, I’d like you to consider a car purchase.  We may have several unmet needs that lead us to the purchase of a car.  We have a long distance to cover each day on our way to work, or we may need to get the kids to soccer practice, or a personal favorite in my house, we want to put the top down and enjoy a long summer drive in the country.  Clearly, we all have needs and desires.  We consider these needs and desires when we pick out the type of car we purchase.  We wouldn’t buy a vintage corvette to bring the soccer team to McDonald’s after the game and we wouldn’t buy a minivan to take long winding trips on country roads.  So far, it would seem that we should have no problem selecting the right car to match our needs or desires.

Ah, but this is where our emotions come into play.  If we bundle a trunkload of fear or anger or other emotion with this need or desire, we begin to cloud the transaction.  For example, we may focus on the color rather than the car’s capacity to meet our expectations.   I mean, we like the color green, why not buy a green car?  Wrong.  Use your words to focus on the need or the desire.  When you talk to the salesmen, explain that need or desire and don’t be taken off track by discussing the plow package when what you really need is something to get you to the grocery store and back.  Don’t let your emotions run wild.  Use them to check-in and make sure you are truly on course.  A green minivan to cart the kids around sounds delightful.

Let’s take a second look at the steak dinner debacle.  If I let my words, based on needs and desires, drive the conversation with my husband rather than my emotions, the first thing that would have jumped out at me might have been the fact that I was complaining about $25 steak when the real issue was that I felt overextended and unimportant in the lives of those around me.  If I was able to express those feelings clearly without all the fuss over dried up steaks, I’m confident that my message would have hit home.  We then might have discussed how my husband could pick up one or more of the chores I’d planned for the next weekend in order to address my feelings of being overwhelmed.   The possibilities become unlimited when we become clear in our delivery.

Its time now for you to step back and ask yourself, who is in the drivers’ seat?   Your emotions or words…  We know enough not to give the keys to the Cadillac to our 12-year-old.  We must employ the same logic to our relationships.  Tell your emotions to move over and put your words to work.  Let’s be clear, it is important not to ignore or shut down your emotions.  Instead, slide them over to the passenger seat into more of a co-pilot role.

Emotions are on board to ensure that you are on the right course.   Emotions translated into clear meaningful words will convey a message that is heard.  Raw emotion will convey raw emotion.  Respect those overzealous emotions, but give the real power to your words.  Let words become your vehicle of choice that gets you to your desired location in life and relationships.

Move over, emotions!  Words are on the uptick.

The Girl from the Bus Said: Yes!