“Promise you are not going to put me on ice while you look for ways to waste your money in the name of funeral rites. My funeral will be taken care of appropriately,” Grandma said firmly and they both turned round startled by the wail of Ife’s mother who had overheard the comments.

Grandma was not impressed and sniffed wondering what kind of religion her daughter practiced that made the thought of death so terrifying.

Ife shook her head but accepted that she would be sad at the departure of her grandma.

“You know I kind of like you and would miss you, will I know when you have passed? Will you inform me somehow?”

Grandma shrugged, “it will be new and old experience Ife, I wouldn’t know what would happen until I get there will I? However, I do know what the process will be here. Just watch and allow the tradition to fulfill itself. There will be no need for you to be scared.”

They were both silent each with their private thoughts and simply did not attempt to explain anything to Ife’s mother. 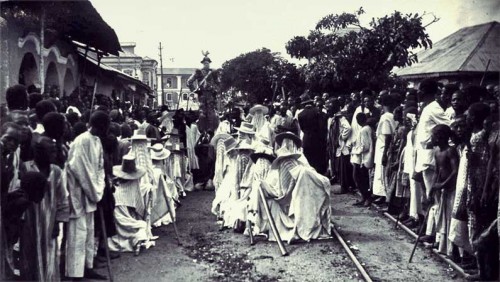 For the first time ever, Ife was given a peep into Raingirl’s world and she saw a very beautiful pert looking girl with blue flowers in her hair that fell in long lustrous waves. Her eyes were the colour of rain and she had a merry twinkle in her eyes. Ife was entranced and she smiled then still in that frame she told Raingirl how beautiful she was. Raingirl laughed and curtsied.
“You are very young aren’t you?”

“Yes Numen I am, but then I am your grandma over there, I am looking forward to leaving.

“Jasmine is in good hands Princess.”

“Thanks, you will know where you are headed?”

“I am sure I will get help Princess.”

“Have a safe trip and oh do visit if and when you can.”

Raingirl laughed pointing out that Numen just got permission or else they wouldn’t be communicating now. Numen thanked her and expressed her appreciation for all that she has done. The experience faded, and Ife was startled into the present by the call of Tinu from the door. Grandma stood up and quietly went to her room.

The next day Ife returned to town knowing she had taken formal leave of her grandmother.

A week later, grandma passed, and a masquerade carrying a long stick that it dragged wailed into town. That wail was followed by thunderclaps, lightning and a fierce storm that soon settled into a gentle drizzle. Old women of grandma’s age group came into the house and started hitting on small drums as they started a dirge. Well, it was more fun as the women did not cry just traced the story of grandma, what she had done for the village. Younger women came with big bowls of bean cakes that they had fried and put them in front of the ladies. Old men who had been hunters also came. They did not shoot in the air but raised their fist up in the air, feet together and gave a thunderous one-word salute; AKE!

Ife watched all the ceremonies intrigued as grandma was laid out in her room, a single white native cloth over her and the small gong placed on her chest.

The whole town was ready to bid the chief priestess goodbye. They commented on the power of YeyeAgba, how she had helped the women of the town as well as gently guided the kings and chiefs in making wise choices. They said her priesthood had helped the town and wondered who was going to be the next priestess. Ife was intrigued by all the stories. Her mother between tears talked about Grandma always being able to bring rain anytime there was a severe drought.

One old woman seemed particularly upset about Grandma’s passing and Ife recognized her as the most constant visitor to her grandma. She was grandma’s young friend. Ife estimated her to be in her nineties. There was a sudden stir as the symbol of the king was brought in led by a retinue of white clad chiefs who looked very solemn. Ife watched them wondering if they knew what they had to do. They came into the room that grandma was laid and sat quietly in a semi- circle. Bowls of kolanut were brought, one of them said a few words, made some circular movements with the kolanut in his hand and put it on the floor with his hands covering the kolanut. The men all stood up and in voice thundered the one word greeting again. Somebody brought in a gourd of foaming palm-wine and poured into individual calabash bowls. The apparent chief officer stood up and invited grandma to drink with them. They delivered the king’s message in a long song. Ife who was almost hidden in a corner where she sat felt the hairs at the back of her neck rise at the song. But which king are they talking about she wondered, there is no king now.

She wondered at the meaning of the song as she could not make out the words. She sensed it was a death song, a kind of release from death into another existence and sure enough she saw the rising form of Raingirl and saw the Misty holding her hand as Raingirl floated out of the room. The song seemed to float away too, and Ife knew the funeral was complete. She was awed. It was a funeral service like no other she had ever seen and it seemed very peaceful.

Then a masquerade stomped in with a fairly old woman carrying sheets of white lace. She mentioned the names of the children of Grandma, it was received by one of the palace chiefs and laid across the body of grandma, the small gong was taken, wrapped in a white cloth and handed over to one of the white clad chiefs. There was sudden silence as the masquerade stood at attention, saluted grandma’s body and in one swift movement carried grandma’s body and placed it in the bland coffin that had been brought in.

All the white clad chiefs stood up silently as the masquerade nailed the coffin and with same swift movement carried it raising it high as he made a terrifying roar rushing out of the room. Ife was stunned and rushed out to see the masquerade disappearing in the distance just as the room and compound was suddenly full of other masquerades as well. The old women went into a fever of drumming, some cried while others bade grandma farewell in their songs. It was very moving and Ife started shedding tears as the import of what had just taken place came to her. Her mother was very upset and just sobbed. Ife understood that they had just missed Grandma’s simple giving love, her simplicity and gentle nature was brought to her understanding sharply.

Ife understood but could not explain to her mother how she understood so she simply nodded. Everybody took it as strange that Ife did not fall apart wailing as others did and she did not bother to explain to anyone that death was just a passage.

She shared her thoughts later with Yeye at the grove when she went to visit a few days after the funeral.

“You know Yeye, it is strange that we announce the transition properly in whatever language we seem to use. Transition, ascend into higher realms, passing on and still we are afraid of it. That was why I told her that we are all confused by death. I said it in Latin. Timor Mortis contubart me. Sounded nice saying it that way. At the hospital I see this passing in so many different ways but the actual passage is always a silence before the approaching light”

Yeye was part of the officiating priests at grandma’s passing and she had been quiet throughout the ceremonies. Yeye looked sad and Ife accepted the reason for the sadness. Yeye had always attended all the ceremonies of YeyeAgba. It suddenly struck her that maybe Yeye would now be elevated to the rank of YeyeAgba and she voiced her thoughts to Yeye, who looked suddenly very alarmed at the very idea.

‘I hope not Princess” Yeye said.

“But why not? You will be next in line I suppose.”

“I don’t think that is the hierarchy, I think YeyeAgba would have left instructions for the other priests, besides I do not attend their meetings as I am simply an officer of the goddess” Yeye said simply.

That made Ife curious and she probed further. Yeye explained that since they had a living goddess with them, her position as priestess was just as a serving officer of Numen Yeye who would give her instructions. In fact Yeye disclosed to a stunned Ife that Numen Yeye was the official chief priestess and head of the village priesthood.

“Essentially, therefore, you are now YeyeAgba, Princess.” Yeye concluded with a smile and curtsied.

Ife went into peals of laughter shaking her head. “You fellows are determined to make fetish woman of me no matter what I say or do right? First it was one naked dance up the hill, then there was the joke of having chosen a groom and not done with your bag of intrigues now I am YeyeAgba, by the way, I am a medical doctor now. Not likely to have time to set up an alternative practice here in the back of nowhere.”

As is usual with such conversations, Yeye simply ignored her and went on with her chores. Ife sighed her bout of irritation vanishing. She dipped a bowl of calabash into the earthen pot in front of Yeye’s house and drank her fill of the cold water. She was transported without warning to her old room in the blue mountains.