Sometimes you don’t know what is coming. It is easy for you to assume that these things don’t work.

You know that word? ‘Emilala a gbe o.’ It simply means, ‘may the spirit of Mother Earth support you.’

Ife tried the best way she could not to feel frightened. Then she remembered a comment of her grandma Yeye Agba. 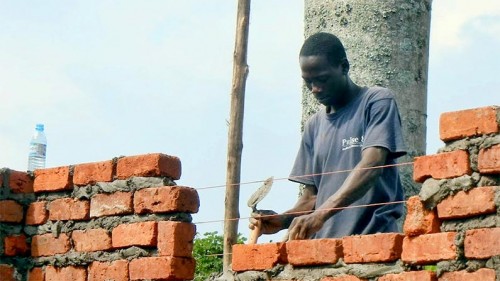 The man was a bricklayer and patched houses for most of the villagers. The community was usually a mixture or patchwork of old mud houses and some that had been cemented over but had the old mud bricks as the skeleton of the house. There were generally to as the modern houses.

There was a rainstorm and Baba Gay, as the bricklayer was known, was asked to come over and patch certain cracks in the wall. He took a look at the cracks and gave the owner of the house his bill. The owner agreed to the prize, and Baba Gay went on happily with his work. He purchased the cement and well generally did the job to the best of his ability.

At the end of his job, he asked for payment. The owner being a counselor in one of the parties, and thus a government official asked Baba Gay to fill a form. It was a laugh really as the bricklayer of doing that as he could neither read nor write and so he told the supposed personal assistant to please inform the man that he had finished his job and wants his money.

They kept him sitting in the reception for hours and that puzzled Baba Gay. Finally out of patience he went up to the personal and requested to see Ejire, that is the  counselor. He was told that since he had not done the right thing and so will have to come the next day. Baba Gay made several trips until it dawned on him that the officers of this low paid counselor actually wanted him to settle them. He stared and asked what type of settlement they wanted. They explained that he would get his money paid as soon as he agreed on what their own cut of the deal was going to be. He was furious and told the boy in no uncertain terms if the boy knew him at all and wondered what the world was coming to? An altercation soon got physical, and the personal assistant slapped the old man and pushed him out of the man’s sitting room.

The old man was shocked and stayed in that stunned position for a long time. There tears in his eyes. He picked his cap that had fallen off and dusted his trousers and gave the boy a long look. He bent down and touched the bare Earth with his hand three times and touched his graying head. He spoke in a very conversational tone to the earth as he brought his fingers to his lips. He then asked Emilale to witness his disgrace and asked that may the spirit of the earth witness this disgrace and render justice appropriately.

The boy taunted the old man and asked him to shove off. The man said nothing, turned and left.

Grandma shrugged, “since he did not tell anyone until it was too late, and nothing could be done, he was buried seven days later with his stomach as high as a woman about to give birth. He gave birth to sand oozing out of his belly. He could not be buried; we had to call the Earth devotees. What the young fool did not understand is that Baba Gay was a devotee, and it dictated the type of profession that he had.”

“The natural laws have no room for cheating of the laws. Baba Gay needed and was worthy of his wage because he had worked for it. Your laws always leave room for cheaters. We say that a wicked man will have done much evil before justice catches up with him, but we know that justice will unremittingly catch up.”

“Hmm, but why do you call him Gay?

Her mum who was just coming in answered, His name is actually Gabriel but as is our custom it was shortened”.

“Yes I find that habit a bit frustrating, it took me a while to understand  “tiffeen” was actually meant as Stephen.”

But this old man had actually prayed for her, and she felt some comfort as she realized that there was still a lot she needed to learn.