Digging Deep: A Writer Uncovers His Marriages is a memoir about my journey to understand my role in the destruction of my three marriages.  I hope and believe that it will help others to deal with issues in their own relationships.

How I Came To Write My Memoir:
Twelve years after my third divorce I began writing a memoir about my marriages.  Digging Deep: A writer Uncovers His Marriages has just been released by the publisher, Outskirts Press.*  My journey in writing the memoir was excruciatingly painful, but in the end healed me and brought me the peace that I had never achieved by simply “moving on” after each divorce.  I believe the book can help others to deal with issues in their own relationships. 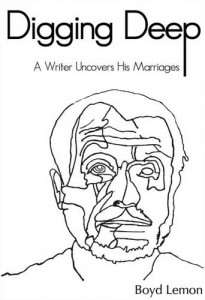 The impetus for writing the memoir came from a suggestion by  a mentor.  After 40 plus years practicing law in California, I had moved to Boston .  Guided by my mentor’s critiques and encouragement I had written a dozen short stories before I left California and continued writing short fiction and a few essays in Boston.

I wanted to write, and I knew I needed a change from life in California where my four children and grandchildren lived.  Boston is a writing city, and I had always enjoyed it when I had visited.  Kate could continue helping me with my writing.  She is a talented writer and teacher, despite her youth.

I didn’t go to Boston intending to write a memoir.  I was itching to write a book, and, of course, a novel came to mind.  When I mentioned that to my mentor, she suggested I write a memoir about my three marriages.  “There’s gold there,” she said.  Encouraged by her, I started drafting the memoir, not having any idea how it would make me feel.  I finished the first draft six months later.  It was painful reliving the incidents of conflict in my marriages and how it affected my four children, but I had no idea how painful what was to come would be.

When my mentor read the draft, she said it didn’t work, that I could do better.  She advised me to throw it away and start over.  Ithe help of another mentor, the great writing teacher and writer, Natalie Goldberg, and dogged persistence, I began digging and meditating and agonizing and thinking and digging some more, and what I came up with as I wrote shocks me even now.  What I had buried was astounding.  The process was excruciating, but in the end healed me.  I learned that writing can do that.

I submitted it to three different editors and a proofreader and revised it numerous times.  Rather than wait the months, sometimes years, that it takes an unknown author to find an agent and then a publisher, I sent it to an author services, print-on-demand publisher, Outskirts Press.  They were a pleasure to work with and put up with my numerous changes and edits before I finally approved the final proofs.

At the urging of several artists, I used a drawing that I had done of myself for the cover.  That was a thrill to see in itself.  I am hopeful that people will be attracted by it, buy the book and benefit by it.  Relationships these days are terribly difficult, and I feel privileged to write a book that I think might help people understand and deal with their relationships.

Read Chapter 1 of my new book for free on my website, http://www.BoydLemon-Writer.com

I am passionate about writing, a retired lawyer from southern California who changed his life. I followed my passion from Ventura to Boston to Paris to Tuscany and back to Ventura. My memoir, "Digging Deep: A Writer Uncovers His Marriages," has just been published. It takes the reader on my journey to understand my role in the destruction of my marriages. I hope and believe that it will help others to deal with issues in their own relationships.

A Litany Of Thanks

A Roadway to Our Past