MAH NIEN.  2014 is the Year of the Horse. This magnificent animal proudly gallops in ousting the sneaky, slithery Snake, the strongest negative force among the 12 animal deities that rule the Chinese lunar calendar. The Horse begins his reign on January 31, 2014 until February 18, 2015 at which time the Ram will take over.

There is definitely a leader of men born in the Year of the Horse.  He had proved it time and time again by his ruthless, forceful nature.  This is indeed the traits of none other than the great Genghis Khan.  He was born Temujin and was the founder and Great Khan of the Mongol Empire which became the largest contiguous empire in history after his demise. 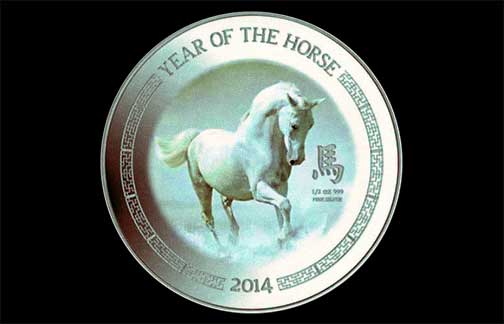 Each year is assigned an animal in a 12-year cycle and the Chinese believe that they take on the likeliness of animals that rule the year of their birth just as modern Astrologists believe people born under a certain sign of the Western Zodiac have similar traits.

Horse individuals are earthly, good looking with raw sex appeal and may appear more arrogant and youthful than other signs but they also are volatile and erratic.  They don’t like routine and prefer being free so they can do anything on a whim.

They are usually happy, friendly and cooperative and not overly egotistical so they wouldn’t constantly vie for attention.  Being social with lots of energy they tend to be the life of a party and like to travel.

Loyal to friends and family they can be fickle when it comes to love but if they can’t have the one they love, why not love the one they are with?   However, if they feel the rein tightening they would not hesitate for one minute to trot off to greener pastures. In business, they are confident and they will succeed in whatever they pursue but with their forceful manner, they prefer to be boss.

Progressive, they tend to be modern but not sentimental so they would throw caution to the wind tossing out the old and welcoming in the new.  New inventions and change give them an opportunity to explore other things but they will always try hard to take care of their responsibilities first.

People in Asia considered it bad luck to have children at that time, especially the female horse because they could bring disaster to their families and future spouses. So the birth rates dropped due to voluntary abortions because no one wanted Fire Horse children because the men are high-spirited, hot-blooded, excitable and hard to control.   Now this belief is a form of superstition to the Chinese and can be just as ridiculous as Americans who fear to cross the path of a black cat.

Regardless of which animal rules each year, most Chinese Americans look forward to Spring Festival or Guo Nien because it’s the biggest party of all, like all the birthdays and holidays combined all into one. Since the New Year celebration runs for two weeks, we start off with eating the usual traditional Chinese dishes symbolic of this particular time.

The most popular Chinese New Year’s dish is meatless and is still consumed today and consists only of vegetables.  This delicious recipe originated from the Buddhist Monks who went begging for food and received only meager portions of vegetables.  However, being inventive cooks, they created what is known as Monk’s food or Jai.

During this period, parents, grandparents, friends, and family will be honored with many gifts as oranges, candy, nuts and pastry.  It’s the time to promote benevolence, reunions, family unity, remembrances, and people will pay homage to their deceased ancestors.

Candied preserved fruits and vegetables also signify something – melon seeds mean many children, carrots resemble coins so they symbolize golden wealth. The long vines of squash and melon plants mean a long line of descendants; lotus seeds mean productions of sons; kumquats are for good luck and coconuts are hopes for a strong relationship between father and son.

Many momentous events took place during the Horse Years.

On a positive note, there was one historical turning point on November 18, 1918, when Germany signed an armistice and World War I was over.

knocked out Buddy Bear in the first round and the World Heavyweight Boxing Championship was successfully defended for the 20th time.

premiered on NBC, hosted by Steve Allen, the show’s co-creator.

On February 3, 1966, Soviet scientists engineered a spectacular feat when they landed Luna 9 spacecraft on the pitted lava surface of the moon.

On July 26, 1978, in Manchester, England, Louise Brown, the world’s first test-tube baby, was born, in vitro fertilization in a pioneering operation by Dr. Patrick Steptoe.

In 1990, the highlights for the World Cup soccer finals, everyone was in awe.  Before a crowd of 6,000 and a broadcast audience of 1.5 billion, conductor Zubin Mehta presided over a unique concert showcasing the once in a lifetime show with a trio of dominant operatic tenors, Jose Carreras, Placido Domingo, and Luciano Pavarotti.

On a more ominous note, on April 18, 1906, San Francisco residents suffered one of the most tragic and feared natural catastrophes of all time: an earthquake that lasted 47 seconds and 450,000 people lost their homes with 670 dead and 350 missing.

And in the Soviet Union on July 16, 1918,  another Horse Year, the unsuspecting Romanovs,  Nicholas, his wife, Alexandra, their five children, four daughters and Alexis, the 14-year-old heir were ordered to go down to their cellar where they were all executed.

In July 1930, police and rioters battled during a serious anti-British riot that broke out in Mansurah, Egypt following the dismissal of Nationalist Premier Nahas Pasha who narrowly escapes death in the unrest when the soldier’s bayonet thrust was diverted by his deputy.

Remember the Bataan Death March that happened on April 9, 1942, when the Japanese command forced 76,000 American and Filipino soldiers on a brutal 65-mile march to a prison camp?  Although weak from dysentery and hunger, more than 5,000 Filipinos and 600 Americans died and many others bayoneted when they could go no farther and others randomly tortured to death.   Only 54,000 prisoners completed the grueling hike.  10,000 escaped into the jungle and of these, 17,000 starved to death in the camp.

In another Horse Year, in November 1978, over 900 people died in a mass suicide by drinking cyanide at the behest of their leader, Reverend Jim Jones at the People’s TempleCommune in Guyana.

This year, 2014, brace yourself for lots of action, adventure, and productivity. In our lively and high-spirited world, life will be hectic with more tension and stress.  We need to take a step back and not tax our energy or drive ourselves too hard.

Industry and the world’s economy will be on the upswing with more attention in areas of diplomacy, politics and our environment.

This will also be a capricious year filled with romantic, carefree adventures. Fashions will be colorful, bold and exciting with stunning designs, yet provocative with flowing fabrics allowing freedom of movement.

The cheerful, sanguine, unpredictable horse will quicken our pulses with his energetic spirit, so proceed with caution and common sense towards money matters.  Patience and perseverance will win out in the months to come.