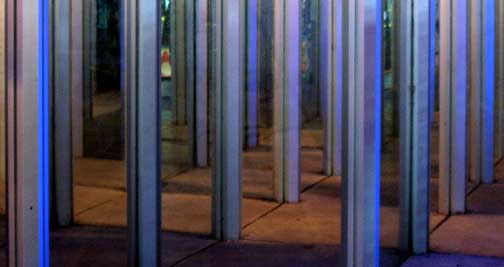 I have suddenly appeared alone at a carnival
there are no crowds and yet still the sound of them carries on the breeze
cries spin out from the whirl of empty Midway cars
the music comes from every corner there
Heavy metal, rap, & the crazy long drawn spun out dizzying notes
of the calliope

There are the carnies there and they seem to look just above me
they bark out about gleaming bits of plastic and cheap baubles running
their fingertips dazzling over the synthetic fur of leering giant bears
just five dollars, step right up—ladies and gents couldn’t be easier

A sudden breeze pricks up against a bead of sweat against my temple
and for a moment the only thing I can track is the feel of it’s now icy path
running down my neck, across my ribs, gathering in a slow forming damp patch on my low back

And then suddenly I see him there,
he is perfect with floppy dark blond hair and his jeans
worn dangerously to paper thin at the knees
he is alone too
briefly in a waft of a carnies cigarette smoke I see that
for a moment he sees me in the outline shadows that form around me
another long blast as the man at the tilt a whirl too notices me
eyes coolly picking out my shape a knowing smirk upon his lips
he slowly pulls the cigarette from his lips and with an astonishingly
delicate but powerful flick he sends it flying away from between his finger tips
the embers scatter and he smiles once more
I wave the smoke that clings to me away and once again
I stand alone and he forgets that I ever was

But, he has not forgotten me
the small formed boy that I always come to see,
the beautiful child I always hope to meet
deep in the familiar dregs of my dreams
I watch him tiptoe away in scuffed up Converse shoes
he seems almost saddened, but, not really
it’s as if he too is familiar with this place and
that this is the way he too expects it to be
his lips twitch up into a longing little grin
I am not sure if it is aimed at me
he moves along and I watch as he disappears behind the fun-house glass

I reach for him I cry for him to wait
my voice is loud enough I fear the next sound will be the
shattering of glass but instead my voice is lost and empty and hollow and there is no answer back
my finger crashes cruelly against, not him, but the smoothness of glass
I lean my forehead against the pane and rest in the coolness
I want to cry but my tears have long since dried out, they have been overused
and now there are none left to me just a burning in my eyes and
the feeling of sawdust and desert sand caught in my throat

I am so empty and I am accustomed to this feeling of loss
it doesn’t make it hurt any less I am mad at myself for a long- long time
why, why, can I never catch him?
it is only then that I always begin to notice myself
even though I don’t want to look anymore, I always do

Suddenly I am given a last glimpse of the beautiful wraith boy
I strain hard and pull my head away from the glass that has cooled and cushioned me
even in the callousness of the cold relentless reflections of me
somehow I’ve come to be comforted by it every time I return
it is the one thing in my dream that I can depend on
the only moment I am given anything to lean my weariness against
with everything I have I silently scream I love you
carefully forming each word in my mind
they are perfect there crisp and unblemished hard and unmistakable like diamond chips bouncing off marble floors
and yet I listen as they come out garbled and chewed up clipped and curled like licking flames on edges of paper
they are spilling from my lips they are crumpled and unrecognizable
they have escaped me anyway, they are not at all what I meant to say
they are sent forcefully away from me mocking me and left echoing limply
bouncing like broken winged birds flamboyantly feathered in their utter wrongness
for a moment they lodge trapped against themselves in parallel worlds
before skittering down wings fluttering dully, uselessly, my words rain down off of nothing but the cold glass