If truth be told, I hate going to the dentist though I’m probably stating the obvious. Growing up, my dentist fit the Robert Klein skit. He always had something controversial to say, when I had a mouth full of instruments. It’s a heck of a way to get one’s iron.

May 1st, 1968. Besides being the workers day, especially in the supposed workers paradises in the Communist world, it was my Dad’s birthday. France had major rioting, but that was not important. At least not to Dad and me. Dad’s birthday was marred by the fact that I had to get my first adult tooth pulled.
I suffered but was given a button I wore to school saying ‘For bravery in the dentist’s chair.’ 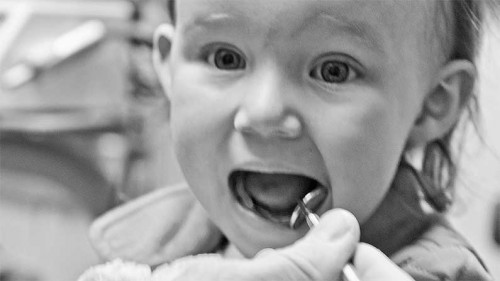 I remember the umpteen visits later if you had cavities or needed root canals. Root canals, what did the dentist think, there was oil in those teeth? If there was oil, of course, the dentist was making out like a Saudi Sheikh while the poor sod (me) was not just losing the oil, but paying for the privilege.

I remember X-rays. Bite down, with the film in your mouth. Doctor, that’s where it hurts. Bite down.

I remember having oral surgery for wisdom teeth. This was almost thirty years ago when I lived in Virginia. I was knocked out with laughing gas for this event. I was very giddy and silly, (OK, more than usual), when I woke up. You could have told me there was a major vehicular crash outside, and I probably would have said “That’s nice,” and giggled. Very sad.

I had a dentist in New Jersey, with a needlepoint, which said Phillip Atooth. Dental humor. A bit long in the tooth.
This does not make you want to go, does it? Well this time, I was in pain and broke a tooth. Oh no, the time out of my day, and so expensive. It turned out, not to be painful, and not expensive, (dental insurance to the rescue).

When I was first shown to a room and told X-rays were needed, I sat down and automatically waited for the film to be placed in my mouth. I had a darkroom as a kid; I didn’t put the film in my mouth then. (Well with all those chemicals, it would have been an unpleasant visit to an emergency room. In Brooklyn, New York, with the gunshot wounds? Take a number). Shows you how old I am. You stand up, and the X-rays were taken that way. Such fun new equipment.

Now, some offbeat history about dentistry. One episode of the television show Who Do You Think You Are was about the actor Steve Buscemi. One of his ancestors was a dentist. He left his home in Scranton, Pennsylvania, ended up dead and buried in Camden, New Jersey. The historian from the Camden County Historical Society explained, he left without explanation probably because he had developed TB. The historian explained to Steve Buscemi that especially before 1883, when Robert Koch found links to bacteria, TB was a common disease for dentists to contract.

If you know the story of Tombstone, you know about Doc Holliday. He was a dentist, who became a gunslinger.
I wrote a historical novel, based on African exploration called The Search for Livingstone. A great source for me was Hearts of Darkness, by Frank McLynn. One thing he mentioned was if the explorer developed a toothache, he was advised to pull the tooth and cauterize it with a hot poker. Well, I guess in the middle of Africa, you did what you had to.

I was just watching a series with actor John Barrowman in Glasgow, visiting an important veterinary hospital. It included a dog, getting a root canal. The dentist had a good sense of humor. The dog was out for the count.

You don’t think of all the conditions that can happen with oral issues. Obviously, mouth problems, but I learned all this could lead to heart attacks and other fun things. In other words, your mouth needs to be taken care of.

Now, I’m going to preach. Not about oral care, but other things you need to take care of to maintain your health. This is a case of “Do as I say, not as I did.”
Stay off the sugar. Watch the carbs. Discipline yourself, so you don’t have problems later. Parents need to discipline kids more. Don’t but them the sugary drink, even when they whine. Make them exercise. Use any advantage you can to help your child thrive later. They will grouse and groan, (I know I did), but they may (or may not) thank you.

See, I went from the dentist to raising kids. Now there is a leap. I am glad if I can make a dent in it.
Time to stop being mouthy and end this, because it is getting long in the tooth.