According to the Chinese lunar calendar, Chinese New Year, the Year of the Snake begins its reign at the stroke of midnight on February 10, 2013, to ascend the throne that the mighty Dragon will have to vacate until the Horse takes over on January 30, 2014.

Each year is assigned an animal in a 12-year cycle. Asian people believe that persons have characteristics of animals that ruled the year of their birth just as modern Astrologists believe that people born under a certain sign of the Western zodiac will have common traits. 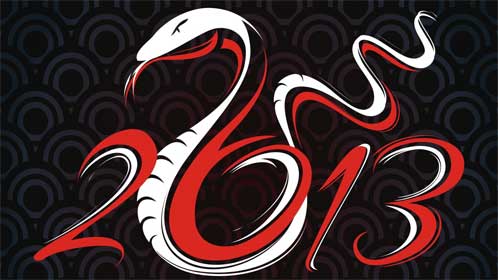 Among the animals in the Chinese zodiac

, the Snake, 6th in position in the Chinese Zodiac draws its importance from its centrality. In Chinese folklore, these wise reptiles symbolize fertility and draw great reserves of yin energy from its closeness to mother earth. Those born in 1905, 1917, 1929, 1941,1953, 1965, 1977, 1989, and 2001 are enduring, passively aggressive, calculating, conservative and quite powerful but always ready when the time comes to make their mark.

Spring festival or Chinese New Year has been celebrated for at least 3,000 years. In Asian Culture, this is their biggest holiday of the year, even bigger than Christmas, Easter, and Thanksgiving. It is a time to enjoy, relax, eat, dress up, and be with family and friends.

Of course, the first thing is to eat delicious, traditional foods prepared for this special occasion.

During the two week Chinese New Year celebration, meats, fruits, fish, vegetables and noodles will all be consumed because what you eat at your first meal that day will determine your good fortune, your health, wealth, and happiness.

Many Chinese American families like to make special holiday foods. They spare no expense and are especially lavish with various assortments of exotic dishes like eggs that become “silver ingot,” mushrooms are “opportunities,” chicken is “Phoenix”, and a pork dish is “Golden Coins.” Poultry signifies family unity; oranges and tangerines mean wealth and good fortune; while pork provides happiness. A steamed fish means that all good things will last forever.

One of their specialties is a hairy-looking seaweed called “fat choy,” that is savored as much for its name as for its flavor. The two words, in Cantonese, sounds like to “prosper”, so their most popular New Year’s dish is Jai or Monks food since it is meatless. This dish originated with the Buddhist Monks who went begging for food door-to-door and were given meager portions of vegetables but being inventive cooks, they came up with this vegetarian dish.

During this time I find myself thinking about another favorite Chinese dish.

– Wash spareribs in warm salt water, cut into bite size and mix all ingredients together to marinate for 10 minutes and then spread out evenly on 8” Pyrex pie plate, set aside.
– Get steamer ready with 5 cups of water, place plate on rack, cover and turn heat on high, cook for 30 minutes, turn heat down to medium and cook another 15 minutes. Remove, and sprinkle with diced green onions. Serve hot.

Bon appetit — hope you like this recipe and I’m sure you will find it delicious over rice.

Parents, grandparents, and friends will be honored with gifts such as oranges, candy, nuts or pastries. This period promotes benevolence; reunions, family unity, remembrance, and people will pay homage to their deceased ancestors.

While many people born in the Year of the Snake along with their families, friends, and relatives enjoy special foods, events and festivities, much can be learned and remembered from the past because many momentous events took place during the previous Snake years.

In 1917, President Woodrow Wilson tried hard to keep America out of World War I after making repeated efforts to bring the warring countries to the bargaining table and he felt he had no other choice so U.S. troops arrived in France in June and went into combat in October.

The first jazz recording, “The Darktown Strutters’ Ball,” was cut in New York City in 1917. The band from New Orleans was a combination of ragtime, blues, marches, and opera and had gestated over the past two decades.

In 1929, Lindbergh’s Airline Transcontinental Air Transport dubbed the Lindberg Line (the aviator was its technical adviser) offered coast-to-coast passenger flights and had to use trains for portions of the trip, so the price charged were $337 to $403 one way for the fastest, fanciest service flights from New York and Los Angeles.

Who could forget The Wall Street Crash in 1929? On October 29th the financial boom of the 1920s lay shattered on the New York Stock Exchange floor. Thousands of Americans lost their life savings and by day’s end, eleven financiers had committed suicide. Signs leading up to “Black Thursday was obvious since prices had doubled since 1925, and in September the Dow Jones Industrial Index reached a record high of 381 in frenzied trading. Hints and warnings of this slowdown from experts did prompt some major investors to pull out of the market.

Then there was the St. Valentine’s Day Massacre in 1929, that left Al Capone, “Scarface,” in charge of a $50 million crime empire. One organization, challenged him, underworld George “Bugs.” Moran’s Northside gang. Capone chose Valentine’s Day to put a bloody end to the rivalry.

In 1929 U. S. Navy commander’s Richard Byrd flew over Antarctica and fulfilled his long-standing ambition to be the first navigator to survey both poles by air. Byrd’s 15 ½ hour flight over the North Pole in 1926, was piloted by the legendary Floyd Bennett, and it had made him famous.

In 1941, World War II and Hitler turned to his obsession of 1920, the conquest of Russia so with Greece and Yugoslavia out of the way, Operation Barbarossa started with the great land battle in history. By December the German army had nearly reached Moscow.

Then that terrible day, December 7, 194l, and the surprise attack on the United States of America at Pearl Harbor by naval and air forces of the Empire of Japan. It resulted in four battleships sunk, four more disabled, eleven other ships sunk or critically damaged, 188 aircraft destroyed on the ground at Hickam Field; 2,330 servicemen and 100 civilians killed.

But quite by accident in 1941, the first medical application of penicillin, the “magic bullet” or miracle drug that would fight venereal disease and the most effective and nontoxic antibiotic was discovered.

In 1953, the undeclared Korean War ended, after three years of fighting between North Korean and Chinese Communists on one side and the United Nations, South Korea and American forces on the other.

In1953 James Bond, Agent 007 was born and introduced by writer Ian Fleming in his novel, Casino Royale.

In 1965, war escalates in North Vietnam when President Johnson relied on air power and continuous bombing in March with the first Marines landing days later in the South to defend Da Nang’s Airbase.

To make matters worse, in 1965, for six days in Los Angeles, as many of 10,000 rioters turned the Watt’s riots into a war zone, burning cars, buildings, attacking police with stones, knives and guns and looting stores.

But the film that brightened our day then was The Sound of Music, the most-watched motion picture ever made, appeared to mixed reviews but the movie set a new box-office record.

For eight nights in January 1977, many of us were riveted to our television sets to watch Alex Haley’s fictionalized family history and tuned in to watch Roots, a saga about Africa in 1750 and ended in America South in 1867.

On June 3, 1989, People’s Liberation Army troops and armored vehicle converged on student demonstrators in Beijing’s 100-acre Tiananmen Square and when the protesters refused to disperse, tanks rolled in, crushing tents and those camped inside. Students fled, leaders were arrested and went into hiding and China’s biggest and ugliest antigovernment revolt was over.

On October 17, in America, San Francisco was struck with an earthquake measuring 7.1 on the Richter scale. The 15-second temblor along the San Andreas Fault killed an estimated 90 people, and many were crushed in cars when highways buckled and collapsed and caused some $6 billion in damage.

On a positive note, President Bush in August nominated Colin Powell to be Chairman of the Joint Chiefs of Staff. A four-star general and former national security adviser to Ronald Reagan, Powell became the first African American officer to hold the highest military post in the United States.

In 2001, thousands of Americans watched in horror on 9/11 when militant and Islamic terrorists hijacked four American planes and the first two planes rammed the 110-story World Trade Center twin towers in New York City. A third plane crashed into the Pentagon in Washington, DC and the fourth plane, aiming for a second Washington landmark, crashed in a Pennsylvania field. Over 3,000 people died that day.

However, in 2001 there were some new discoveries like Zovan, the drug to reduce death from food poisoning and The Segway Human Transporter which is the 65 lb. Electric scooter and the SynchroMed system which is an implantable pump to manage chronic pain.

Just by looking at these happenings during the Snake years, do you see a pattern?

The Snake Years have never been tranquil probably because it’s the most negative force in the cycle and coming right after the Dragon which is the strongest positive one.

So it’s a good idea in 2013 to take time out to enjoy romance, to date, to pursue the arts, listen to music and go to the theatre. The Snake will also play a major role in fashion also with elegant and fluid lines with more sophistication.

In 2013 when it comes to decisions, tread slowly because the Year of the Snake is unpredictable. Just be careful because things might look peaceful and quiet but changes can occur during the Snake’s year that can be devastating so it would be wise to remain calm.