We have all seen anomalies, things which we would consider beyond question, such as a giant’s footprint. What may be the oldest footprint found on this earth was discovered in 1968. William J. Meister, a simple fossil collector, found the impression of a sandaled foot crushing a trilobite, and would have been made 300 to 600,000,000 years ago.

This gives us a clue that perhaps there were people from another world walking on our planet. People with far more knowledge than we could ever believe, they even wore sandals. 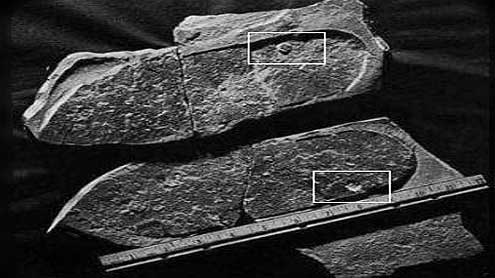 Trilobites were small marine invertebrates, the relatives of crabs and shrimps which flourished for some 320 million years until they were extinct 280 million years ago, or that’s what scientists believe. It’s amazing what rock will show since humans were thought to have inhabited the earth between one and 2 million years ago, and who would ever believe that footprints with sandals would be found 600 million years ago.

The size of the foot with the sandal was 3 1/2 inches wide and about 10 1/4 inch long and the heel was indented a slight bit more just like a human heel. But let’s go back to the giant footprint that was found in New Mexico, what’s known as the flat area of the great white sand, the year was 1931. The footprints were found in a desert area: Antelope Springs

, 43 miles west of Delta, Utah. Even though the footprints were huge compared to human scientists believed these two, were left by humans, one reason they noticed an instep plainly marked.  These prints were from 16 to 22 inches long and 8 to 12 inches wide, imagine that. Another distinct marketing when it comes to these 16 prints were the distance between each footprint from left to right was 5 feet in width, and would definitely give you the picture of a giant.

The site near the great White Sands was revisited many times in the 70s and 80s and more tracks were found. It must be noted that 42 years later these tracks were one in a half inches higher than the ground. Can you imagine the weight of this giant leaving these prints and the earth with its rain and wind removing the soil around them for millions of years?

In my mind, there is no doubt that these were living creatures. Many people tried to explain something different perhaps that long ago, we’re speaking 60 million years ago for the giant, camels were walking around the planet, but scientists all agree that these giant footprints belonged to a two-legged creature and not to a four-legged animal. It’s amazing and mysterious when you think back to this planet being the age it is and what roamed the earth.

A different footprint was found around 1817 on a slab from a quarry which measured 10 1/2 inches long and 4 inches wide but what made it strange, the toes were six and a quarter inch apart and there were toes at the heels which were 13 1/2 inches.

“The toes were very much spread, and the foot flattened in a manner that happens to those who have been habituated to go a great length of time without shoes notwithstanding the circumstance, the prints are strikingly natural, exhibiting every muscular impression, and swell of the heel and toe front and back and the precision and the faithfulness to nature, which I have not been able to copy, with perfect exactness, in any drawing.” (by Henry Schoolcraft

Geologists believe that the slab in the quarry of limestone hardened about 270 million years ago also like the other footprints earth had fallen away and left them high above the ground. Now we go to South Dakota the little Cheyenne River a flat white rock of magnesium limestone hardened about 100 million years ago and here were the footprints of a foot covered with a moccasin. Because of its size, they believe it was either a child or perhaps a young, and the stride was 4 1/2 to 5 1/2 feet. Once again there was an instep that was clearly marked and you could see faint tone marks these have to be prints of a human being roaming around the United States 100 million years ago.

If you’re anything like me and people that love the earth and love to find strange things when walking along the shore what would you do if you found I Giants footprint or for that matter a footprint with toes on the front and back? First I’d have to say I’d be pretty excited, and then I would notify the right person in a university who would believe me?  Why is it so hard to believe that this planet has been around for 600 million years or more, and why are people so skeptical?

First, you have to be interested in what you’re seeing or what you’re looking for; it’s like telling a Baker to build a brick wall.  Many of these footprints wore shoes, or better yet moccasins or sandals.  so you ask yourself, 600 million years ago somebody smarter than we had to be making these sandals but who were they? I mentioned sandals but one scientist truly believes one was made of leather and hand-stitched he even said, “Made from the finest leather and the finest stitching.” This man was from Pershing County in Fisher Canyon Nevada and the limestone was dated about 225 million years ago.

All of these footprints were found in the United States although footprints similar to these are found all over the world. If you really knew me you would know how interesting it is to find something strange out of place laying on the ground while walking. So the next time you’re taking a hike and there’s some stone look for a few rising pieces and see if there’s the shape of a foot, you will be surprised.

DIVA: A Demented Stalker, a Sexy Flutist, and Murder!

A Museum for the People