Original British Drama: In view of the latest craze to have a railway theme in most programmes, I have come up with a story line which involves a colourful conservative politician who finds a magic railway guide in an old arch at Kings Cross.

This book transports him back to 1930’s central Europe where he is pursued by evil agents on board a cross continental train heading back to England. A man in a black fedora and caped raincoat is one of the leaders of this conspiracy, ghostly ethereal people, who live in the shadows and only appear in times of political gain. 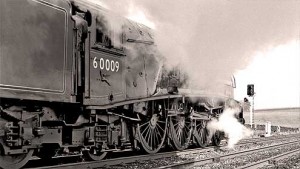 These men capture our hero and bind him in bandages to stop him talking and to hide the outrageous colours of his clothes. But they have been seen, two gallant school boys George and Dave witnessed the whole incident as the elderly politico is dragged away and so they swear an oath to save this stalwart of the conservative party.

First of all they dash of to see their friend Boris and explain the situation. Boris listens intently to this adventure story but deep down inside he doesn’t really believe anything George and Dave tell him as they always end up being caught out, saying things were just made up but he agrees to go along with them to see the teacher in charge. They find Dame May in the restaurant car sipping on a gin and tonic. They gush out their story to her but she has had experience of people who tell tall stories and tells them to go back to their carriage and behave, didn’t they have any homework to do?

After many adventures in which they prove they are right and beat down the man in the black fedora who keeps trying to prove them wrong and the whisperers in the background. After all this, the colourful conservative is rescued and brought back to England and is given a huge contract with the BBC and it all ends happy ever after.