Stars in my Eyes

Eni wandered dispiritedly into the porter’s lodge and checked if she’d been given accommodation.

The porters looked through a list and nodded that she had the same place she had been allocated when she first arrived. Some students had their temporary allocation changed. Eni didn’t even think she had any preference. It is just a bed she told herself anyway. So she learned it was still ‘A’ quadrangle in Babylon. There were three beds there and one tiny kitchenette and bathroom. There was a notice on the door from some Christian group welcoming her to Babylon and telling her that her true destina­tion was Zion. 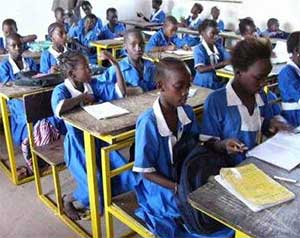 Eni chuckled in amusement at the play of names. She chose the farthest end of the bed and plunked down in sheer tiredness. She had finished her registration at last and was still clutching some papers that she will submit at the accounts office as well as a piece of paper stating what her duties were as a member of the Hall. She grimaced at the paper and stretched out fully on the bed closing her eyes. Remember everything I told you?

Not now,
Now is the best time,
But I am tired
The argument had started in her head again You didn’t bother to check who your room­mates are Does it matter?

Her stomach growled.
Just leave me alone will you? Eni swore to herself.
What? A voice answered her and she snapped her yes open into the laughing ones of Nefertiti who considered her.
I was not talking to you Eni offered by way of explanation

“How long since the last meal”? Nefertiti asked in gentle tones.
“Uh”?
“Food. F.O.O.D. You know the body needs it even if you don’t”.
“I will survive” Eni replied.
“Yeah I bet”

Eni managed a tight smile and closed her eyes again. Kofo considered the form of Eni and left the room quietly. Eni said nothing just tried to regain herself then the arguments started again.Her brain felt stuffed with cotton wool Peter. The tears were now threatening to spill over and she cursed softly and punched the pillow.

Fool
Mooning like a sixteen year old
I am not mooning
You knew he was not going to marry you
Too old in fact He wants a future too
Besides you had said no
Silly idiot.

Eni groaned and put the pillow over her head trying to shut out the voices.
Leave me alone – That one slipped out.
“After you have eaten,the signs are obvious.You are heading for a breakdown”. Eni opened her eyes in shock straight into the amused gentle eyes of Nefertiti holding some sandwiches.
“What’s happened to Miss Chan?”
“Miss who”?Kofo was startled.
Eni smiled “Your appendage.”
Kofo laughed softly “Really? And what am I”?
Eni replied without thinking “Nefertiti”
Kofo chuckled in real amusement
“Interesting. Now eat” *

Eni groaned
“That will serve you right giving us names, roommates and after all the trouble I went to get that for you”. But there was no anger in her face or her voice just amusement. Eni smiled.
“Didn’t think of you as girl-Friday either”
“Yeah”?
“Thanks and Eni took the offered sandwiches. Kofo shrugged and went over to her corner covertly watching.
Eni sighed just as her stomach growled protestingly. Kofo laughed
“You remind me of a sore bear”
“Thanks”
“Truly” Kofo was still full of mirth and came over to stare at Eni
“Have you made up your mind”?
“Uh”?
“You can’t be sure whether to throw the food at me or to eat it. My advice is the latter. I can hear your stomach from here”. Kofo said laughter in her voice. Irresistibly Eni grinned.
“That’s better” Kofo approved. She gave Eni a quizzical look and said “I had better go after Miss Chan,” laughing she left the room.

Eni chuckled and then frowned seeing she was still holding the damn sandwiches. She might as well eat the thing before Neferriti returned.
Instinctively she knew she had made a friend not that she really was in need of such but she had appreciated the gesture of compas¬sion to a fellow student even if the student ought to have known better than to start on a hunger strike for no reason. She gave a slight smile at that Hunger strike?

How novel, all because of a man you sent packing yourself Imagine that!
Eni sighed, she was going round the bend she thought and started to unpack her bag in an effort to do something and put those crazy fellas in her head some yakking space. She almost laughed at the thought of that. She smiled as she thought of Nefertiti and her little gestures of kindness.

Replete but still tired Eni stared moodily out of the window. Each room had been designed to give every student some sense of privacy. Eni prized her privacy and had appreciated the intention of the builders of the halls of resi¬dence in making that concession to the students. She knew the acute problem of ac-commodation in Universities generally and thought this was a major miracle.
Minutes later she was so involved that she didn’t notice the re-entry of Nefertiti until she heard her admiring voice “But this is beautiful.”
Eni looked round. Nefertiti was admiring a small figurine made of glass that she had put by her bedside table.
“You like it?
“Sure”
Eni shrugged and smiled “Then it’s yours with my thanks”
Nefertiti stared “Just like that”?
“Sure,” Eni said still unpacking.
“Hmm..are you in the habit of giving things out just for the asking”?
Eni laughed, “Do I look that silly”?
Kofo laughed too “I was worried but thanks”. Eni watched her new young friend for a while then continued with what she was doing. There was silence for some time then still holding her new gift Kofo went to her own corner just as the door opened and Miss Chan sailed in. She stopped abruptly staring at Kofo. “I have been looking all over the place for you” she said in accusing tones completely ignor¬ing Eni.
“Why? was I missing”? Kofo asked frowning.

That stumped Miss Chan and she peered at the gift in her friend’s hand
“What is that”? Toyin asked pointing at the figurine
“A gift”
“Who gave it to you”?
Kofo was sarcastic in her reply: “A ghost who lives in the room or had you forgotten that there are three beds”?  There was silence as Miss Chan looked puzzled then she seemed to have noticed Eni but still refused to say hello. Eni was bored by her little pretensions and simply went on with what she was doing. Kofo sighed what was the use anyway? She gave Toyin a bored shrug, “So why were you looking for me? As you can see I am perfectly okay and can look after myself”
Miss Chan stared at her friend and quietly walked out again saying nothing. Nefertiti sud¬denly chuckled and stood up. She walked towards Eni’s corner and took a lazy look at the row of books that Eni was putting up in her shelf, she stared at them in wonder.

“You going to read all this stuff” Kofo demanded.
Eni laughed, “You have something against reading”?
“1 like junk” ,Kofo said with a mischievous look at Eni.she went over and read some of the titles and grimaced.
“Yuck”
“What’s the matter”?
“Hard stuff girl” Kofo protested
“Oh I read magazines too” Eni offered
“Sure? Can’t seem to find any here”.

Then she sat on the chair and looked at Eni, “Let’s do a bit of gossiping, you are for real right”?
Eni smiled,”Pinch me and find out”
There was a small laugh “Think am going to like this room after all”
“Hmm don’t be so sure my best friends call me a bear when they are feeling generous you know.”
Kofo giggled suddenly sounding like a very young girl. “Really? How interesting. Never been to the forest before,should I call for help”?

They both laughed out.
Just like that they had become instant friends. May and September.

Which Posts Get Read?

The Deadliest Flu in History 2