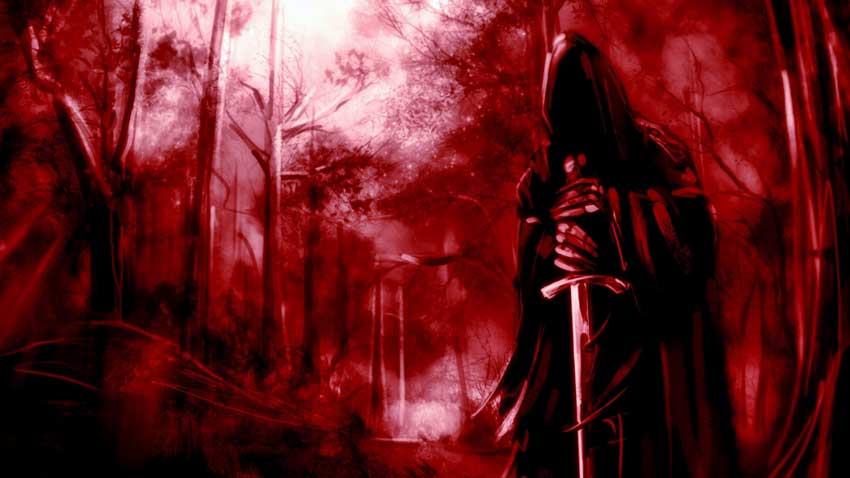 Death is not supposed to die. That’s the problem. Here I sat in a pile of reaped souls while he absconded with my keys.

Lovely. So how did it happen?

Lightning announced my approach—as if Death needs announcing. Sweeping up the cottage hill, I smiled.

There is no way he was going to get out of this one: bubonic plague saturating the roof, killer bees humming at the back door, a man-size amoeba covering the only window, anthrax powdering the outer walls, scorpions hedging a circle around the building, and me, scythe ready, standing at the door. No way.

He threw the door open before I could knock. “‘Bout time you got up the guts.”

Mr. Undying pain-in-my-rear turned toward the glimmering fireplace. I almost made the flames grab him in a mangling fist of torture. Almost. But I had questions.

“You are not surprised?” I asked.

My fist balled around my scythe. “May I come in?”

I entered. “You mean, you heard the creatures surrounding your habitation and assumed I had come for you?”

“Heard you.” He corrected. “You’re dang noisy dragging that scythe around.”

Straightened to my full ten-foot-four, I bumped into the ceiling.

I threw my scythe across the door and frame, locking us in. “I suppose you’ve a plan to escape this time? You are surrounded.”

“Yah, figgered as much.” He scratched his beard, studying me.

“Are you ready to come, quietly?”

I stared at him. He stared back.

“Death can’t…die!” I gasped, ignoring the cold tingling in my fingers and toes.

“I…will…not…” And I collapsed to the floor, lifeless.

He picked up my scythe, pulled on my robe, and stepped out of the cottage—even as I was sucked into that prison for reaped souls.

I’d thrown everything at him—fires, psychopath killers, subzero temperatures, Bird flu, mad cow disease… He just kept chugging. With approximately 107 deaths per minute, it’s not like I had time to chase after one agitating soul!

Distant light gleamed from the prison door, the only exit.

I clambered down the pile of inductees (a mountain to rival Everest) and slipped down the forever-tall mound of apathetic souls, bowling into a second mound where I stopped dumping them yesterday.

Ghosts shot into the air like a giant snow globe.

I brushed one off my back.

People moaned, not whining about being trampled or jostled, but bewailing—as they would for eternity, their sins. Big babies. They made their own decisions.

He stood, in the flesh at death’s gateway! I fumbled forward.

He pulled back his—my hood and called, “Dianna?”

A teen near the door turned, eyes bulging in recognition.

My tormentor seized her wrist and exited the prison. I hurdled through the last of the souls and caught her pant leg.

The prison faded as I clung. My face skidded out of a phone booth onto an isolated roadside. Waves slapped a dike between me and a lake.

The girl stopped her rescuer. “What are you doing, Tom?”

“I said I would rescue you, even from death.”

He searched for a comeback. “But I slew Death for you!”

“That’s sweet. You also accidentally pushed me off a cliff.”

“I have more admirers in that pit than I ever could hope for here. I’m going back.”

“Goodbye, Tom.” She patted his cheek. “You were my favorite boyfriend until you killed me.” And she snatched his-my keys, stepping back through the phone booth.

Rising to my full height, I grabbed my keys.

Tom sat on the curb. He looked so dejected I couldn’t bear to send him right back to her presence. Death is not without compassion

I reached for my scythe. “How did you pull it off, by the way—staying alive?”

“Tell you that, and I’d have to kill you.” His grip tightened.

I snatched at the weapon, missing.

He hurled my weapon into the splashing waves, laughing like a maniac as he charged down the highway.

Hm. Spilled tar on the road? A poisonous snake? Maybe a head-on with a Semi? The possibilities were endless!

Author’s note: This is a Flash Fiction version of DEATH GOES TO HELL, taken from a compilation of short stories including such titles as DEATH WRITES A ROMANCE; DEATH STEALS THE BATMOBILE, DEATH GET’S FIRED, and more.

lorrieporter Nov 7, 2012 3
How Not to Bore your Reader: Every scene happens somewhere. It could be on a pirate ship, under a bed, or walking…
Publishing