After striking ‘Uncle’ Matt unconscious with a tire wrench, Benny proceeded to squeeze one end of a rubber hose through the slit of the car window, the other end in the tailpipe.

He started the engine, closed the door, and walked away into the night, while his thoughts wandered back to his childhood when he was still a cheerful little boy… 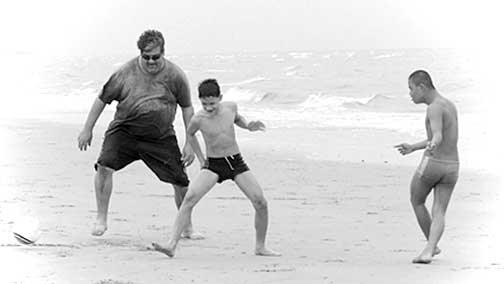 “Goaaaaaal,” Otto shouted excitedly, when Benny, whose turn it was to be the keeper, had failed to stop his shot.
Otto’s Uncle Matt recovered the ball, and the three of them resumed their Football match.

It was a special weekend for the boys, as Uncle Matt had taken them to a camping site near the beach.  Otto and his uncle had been there before, but for Benny, everything was new and exciting. What he liked most of all was to be taken seriously and treated with respect by a senior person.

For Benny, even the ‘Fish and Chips’ they had for dinner was a special treat on this perfect Saturday, and Uncle Matt had taught them how to play chess until it was almost midnight.

Exhausted by the exercise and the warm weather, Otto yawned and slumped in his chair.
“Don’t forget to pee and brush your teeth,” Uncle Matt told him, putting the chess pieces back in their box, while Otto stepped out of the camper to go to the camping’s lavatories.

When Benny came back to the camper, he was surprised to find Otto and his uncle already in what appeared to be the only bed. But, being a small boy, he supposed that would probably be all right.

“How cozy!” Uncle Matt chirped, folding back the bed sheet to let him in.
“Now, let’s find out if Benny is truly a big boy too.”