Shamanism, Sorcery and… the Difference Between Enlightenment and Totality

“The shamanic path is not a path traditionally intended to achieve enlightenment,” explains Michael Harner of the Foundation for Shamanic Studies. In sorcery we speak about moving the assemblage point in order to shift your perception on the road to heal yourself (and others). Reaching totality goes much further than enlightenment my dreaming teacher Vidar explained.

Michael Harner also says: “It has been a path followed because people…wanted to help (others) through healing and alleviating their suffering. In following that path, gifts were then given them that were totally unexpected…This then changes them, and they are never the same again; they are indeed enlightened. But that was not the intention; it was just a result.”

Shamanism is and isn’t a path of transformation and enlightenment. Shaman, Christina Pratt, explores this interesting state of affairs. Shamanic trance states are task oriented. They are not focused on gaining enlightenment. However, an ongoing working relationship with Spirit is one of the most efficient and effective paths of transformation, waking up, and growing up for shamans and for lay people. (source: why shamanism now) 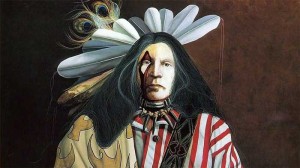 Call it a concentrated sense of perception. And it is usually, but not necessarily located at the height of the shoulder blades. My dreaming teacher, the shaman Vidar, explained in the next excerpt from my book The Sorcerer’s Dream more about the difference between enlightenment and reaching the totality.

He says there are various teaching methods to reach enlightenment, all with the same goal: inactivating your material body, and he uses the sweat lodge as an example.

“In the sweat lodge you close your eyes and use your spiritual eyes to see. Your daily self did not perceive the  light flashes you observed there. People only realize afterward that they left their material body and were in a completely different place. Realization means the movement of the Self outside the material body.”

“As a child, you are busy preparing yourself for totality.” Vidar explains that as a child he reached totality after the second mushroom ceremony. “Accompanied by an eagle I was busy preparing medicine, when, with his wing, the eagle suddenly pointed at a star. ‘That’s you,’ he said. I saw the star light, a clearly defined light three times stronger than the sun and dove into it. I experienced a whirling movement,” he claps his hands together and turns the tips of his fingers a quarter turn toward himself, “and saw the innumerable billion of fine lines coming out of totality and piercing through every atom. My assemblage point shifted automatically. I looked up and saw the second reality. I had enough strength and energy to do it.”

Vidar announces I need to prepare myself for a solid, attendant entity, which automatically transforms into an ally, an earth-entity who is helpful in shifting the assemblage point. An ally as well as the entity belongs to the second reality. I see your ally waiting,” Vidar says pleasantly staring out in front of him. “He is purple.”

He clarifies: “As soon as you’ve taken sufficient traditional steps, then you have enough energy to shift your assemblage point yourself and reach and become totality. However, it is not your daily self who is doing that. The knowledge of the spirit makes the super-intelligent decision to do it. When you have the right connection with the lines of intent, you can shift the assemblage point, or better yet – you move your assemblage point with your intent from the will power of totality. Then you discover the realities are created from within the creation point by a dream sense. When that happens, you leave all ideas of religion. You discover there are supernatural beings that also create and there is a divine spark in all existence. People know this instinctively, giving it shape through religion. Compare it to eastern wisdom; they have had a glance of totality because they say: “You are God yourself.”

Latest review
“Dreamshield has an engaging narrative style and tells stories that are engrossing. There is a lack of literature on female sorcerers and this book makes an admirable effort to fill this lacuna. When, at the end, she attains “totality,” the reader will share her exaltation.”
~ StanleyKrippner, Ph.D. Alan Watts Profess of Psychology,Saybrook University.

The Sorcerer’s Dream is available at Booklocker, Amazon, and everywhere they sell books.