Not since the Vietnam War has America been so polarized, so angry and so divided. 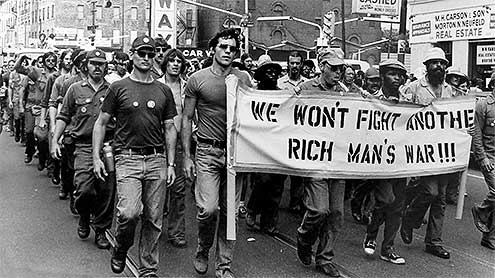 There’s a lesson in the history from those years of the 60s and ’70s that almost everyone is ignoring. Working together breeds peace and prosperity. A social pseudo-civil war breeds recession, unemployment, increased crime, and general unrest, up to and including civil riots.

But America is not alone. Egypt, Syria, and a host of other countries have or are experiencing the same upheaval. One can’t help but wonder where all this will lead.

It has been said (in several different ways) that “Those who fail to heed the lessons of history are doomed to repeat them.”

Today is no exception. The majority of people are patently ignorant of such lessons so they vote as the celebrities and the controlled media tells them to vote and they blindly follow the herd, mesmerized, believing and swallowing the highly paid spin-doctors manipulative propaganda as truth. And so I wonder. Do you see what has been and is now going on in our world today, and more importantly, do you even really care?

The news is always worrisome and quite depressing so I’m turning off the TV and going to the mall to buy a new video game.

Or maybe I’ll go to the spa and have a facial, a Mani and a Pedi. Then my biggest worry will be what to wear to this weekend’s parties.