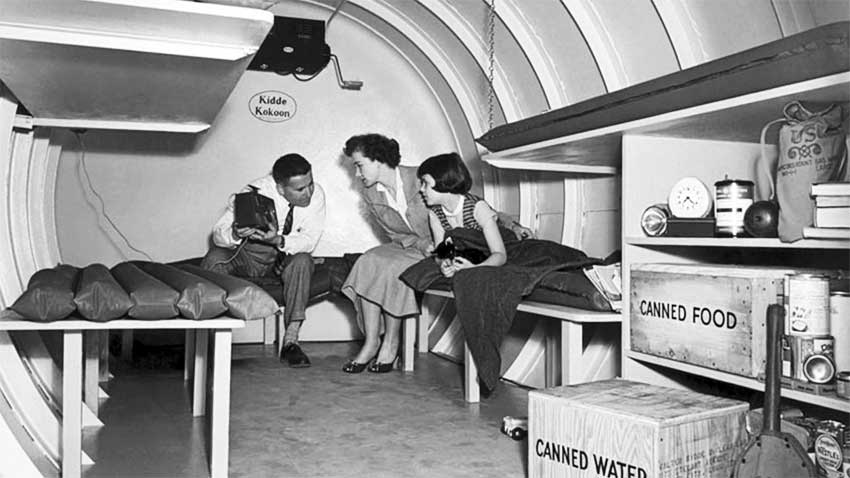 (Fall-out chases you in the country – follows you to the city.)

If you grew up during the early to mid-fifties you recall a large yellow siren on top of your school – to be used in case of a war.  Children within those walls of that school were taught to go to the basement, face the wall, and criss-cross their legs with their head down, between their thighs.

You had to remain in this position with your arms extended over your head until the all-clear sounded.  Following this, around the kitchen table, your parents would read the newspaper; there it was – a full-page advertisement for, “FALLOUT SHELTERS.”  Growing up in the fifties was different, to say the least.

Children swing back and forth –
back and forth – on swings, and
run from one yard to another, from
one field – to the next,  and fall into a haystack –

The country life would be what city parents
had dreams about, with room to run – too play
in goldenrod, dashing down a row of fresh
corn a farmer had forgotten.

The city kids picked their corn from a bin
inside a local market.  City children played
hide and seek between weeds covered by
toxic waste – no one knew about toxic waste,
back then.

City lots did have weeds, bushes,
trees, and large buildings for us to
hide – children in the city learned
how to make a rusted can fly; playing
kick the can.

One street, one lot, and families
gathered on city blocks near
Universities, factories,
hospitals, smokestacks, and those
yellow things on top of schools.

As children, I often wondered how many
friends ever thought about our city school
with that yellow thing protecting us if war
broke out? Country kids never heard
the siren’s sound.

City kids spent time, at five o’clock,
around their dinner table talking about
fall-out shelters; how many could fit
inside one we could afford, and whose
backyard was big enough?

We named all canned goods; peas, corn, even
creamed corn, and carrots by “Green Giant.”
How many cans were needed to survive?
I even asked, “What about my bird tweety?”

Those kids who lived in the country never sat cross-legged
on a cold floor in a school basement or covered their heads
and prayed to themselves.  I prayed, “Don’t make it real.”

“See Spot, see Spot run.”
That sound never left, and those big pictures
in our paper advertising fall out shelters became
a permanent reminder of war.

One morning I looked up and the yellow
siren disappeared – our teacher smiled, she
told us, “You won’t be going back to hide in the
basement,” so we all clapped, and some kids
had tears in their eyes, while older boys laughed.
As city kids, a certain noise left our life.

Those country kids never heard the sound,
or worried about living beneath the ground.
But something in the city makes its’ way into
a country home, no one knew, back then

when fall out fell from the sky from some place
out west, no matter if you lived on a fifty
foot lot or some country home – it found you.
No, they never advertised or warned the kids
about the Government testing bombs.

We’d be grown with children of our own,
and while reading a book it noted where we lived –
more cancer, more disease because back in
the fifties the wind blew east, and fall out-landed

in the city, and rested on a country path.
Then we had no siren to warn us, although I do
recall my mother closing all the windows, she
made me stay inside – no one knew – but mother,
she had an idea.

Big shots were invited west to view the giant
mushroom cloud – as fall out fell.
No one sat inside a shelter or ate canned food.
From the city to the country children play
beneath the same sky, and harm can be hidden
from grown-up eyes.

The Meaning of Friendship

The Opera House – People and a Penny