Former Gov. Sanford, who separated from his wife in the wake of his affair with an Argentine woman, has opened a new luxury resort hotel here in Juarez, a franchise with Choice Resorts Mexico. Sanford built a political platform in the U.S. based on staunch, religious family values while fiercely attacking his Democrat opponents as immoral. 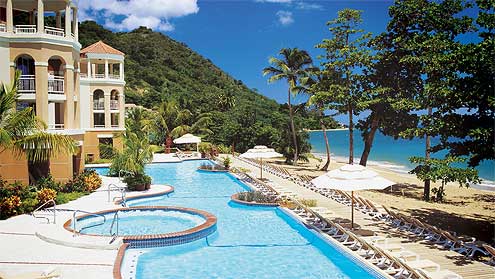 “The Sanford Suites,” explains the former governor, “offers 35 Spanish-style guest rooms by designer Alberto Gonzalez, the former Attorney General who resigned his post to pursue a new career. Guests can take advantage of the resort’s tranquil lounge bar, decorated with religious artifacts dating back centuries, while attractive waitresses and waiters cater to your every need in a Christian atmosphere.”

The resort represents the perfect place for both business and leisure travelers visiting the border town. “It’s ideally located in the center of town,” Sanford says, “close to where the action is and near the Cathedral, dedicated to the Virgin of Guadalupe, patron of the cities.” When asked why the former Governor moved from Columbia, South Carolina, to Juarez, Sanford explains, “Mexico is one of the freest countries.

No matter what people say about the drug lords, they have eradicated the government here. And as Ronald Reagan often said in his speeches, and I quote, ‘government is not the solution, the government is the problem.’ And,” continues Sanford, “whatever you may have heard, Juarez, Mexico, is full of good people, interesting attractions, fine restaurants, a fascinating history, and impressive shopping values.

Cocaine is less expensive here and so too are the exotic, Latin women who are not only less costly to date, what with the reduced prices in the restaurants, but they also add a spicy twist to an otherwise boring marriage. The women here understand that man holds dominion over them, as laid out in Genesis 1:28. None of that women’s liberation nonsense here. The Church has engraved this truth in Mexico’s cultural DNA. No need to debate it.”

Sanford notes that, like extended stays, a permanent move to Mexico is financially advantageous for a business owner because of the higher the income bracket, the lower the taxes. Plus there are few labor laws and minimum wages, which can sometimes amount to a couple of bucks a day to keep the servants happy. “That means higher profits,” says Sanford, who was known, during his political career back in the U.S., for letting loose a group of live pigs in the state house chambers as a visual protest against the Democrats’ ‘pork projects.’ Here, favors can be bought,” he quipped, “without the hassles or having to qualify them as campaign contributions. In fact, there’s hardly any regulation here to speak of. It’s truly a paradise for plutarchy, where the wealthy elite rules and can even buy the best men from the military. You think the United States is the purest form of capitalism, look again.”

Sanford adds, “Although there has recently been a spike in competitive struggles between the various entrepreneurs in the drug industry here, the economy is robust. In fact, the drug industry is one of Mexico’s most competitive, innovative, and lucrative, giving a vibrant boost to exports and fueling the overall well-being of a stable GNP. Even the little man on the street has a chance to make a buck by trafficking.”

“I want to clarify also,” says Sanford, “that, despite rumors, this resort has no affiliations with the C Street group or the Family. But like the Family, at the resort, we focus on Christian values. Mexico is a God-chosen country where its people, though mostly down and out, take pride in their nation, where the wealthy are the privileged few, chosen by God. Mexico is a Christian nation, ruled mainly by Catholic-based laws, the catechism, and centuries of tradition, where the peasant understands the dominion of God’s selected few.

The wealthy are tasked with the duty to shepherd the flock. This understanding is in everyone’s blood, as taught by the authority of the Catholic Church. This custom stretches back to the Spanish monarchy whose power originated by divine intercession. Fortunately for Mexico, its founding fathers were disciples of the Baroque era and not the Enlightenment

, unlike those agnostic, deist fools who founded the United States.”

To celebrate its opening, the resort is offering an enticing “All in One” package for services. Guests who book this limited package will receive a welcome glass of champagne, complimentary access to the resort’s breakfast buffet, and an invite to a special evening buffet that includes two lines of blow, three hand-rolled marijuana cigarettes, and one free hour of Wi-Fi access.

“I want to stress that the Sanford Suites welcome not just Republicans, but Democrats as well,” says Sanford. “In fact, last month, Congressman Mike McIntyre, a North Carolina Democrat, stayed here. Mike is a good ‘ol boy, believes that the Ten Commandments are ‘the fundamental legal code for the laws of the United States’ and thus ought to be on display at schools and courthouses.”

The Sanford Suites is fast becoming a meeting place for influential U.S. elected officials, the perfect spot where high-powered CEO’s and international business professionals can find a sympathetic ear and broker the kinds of deals that require complete privacy and discretion. Recently, prominent men of influence have taken extended stays at the Sanford Suites, such as John Ensign, Republican Senator from Nevada, who needed a time-out after the media portrayed him as having an extramarital affair

Other very important people to frequent the resort are Republican Congressmen and Senators Larry Craig, Mike Foley, David Vitter, John Boehner, and Richard Curtis. And, of course, Oliver North, who is well known for brokering deals south of the border. Current prison inmates, Jack Abramoff, and former Congressman Duke Cunningham are both planning a visit as soon as their time is freed up. Scooter Libby has leased a permanent suite here where he is free to make a new start. In the eventuality that an indictment might actually be issued against him for war crimes, former Vice Pres. Dick Chaney has bought one of the suites.

About the Sanford Suites
Choice Resorts, Choice Resorts Mexico, and Sanford Suites International are proprietary trademarks and service marks of Mark Biskeborn’s fictional imagination. Many of the prominent men named here have been involved in public scandals regarding sexual crimes or bribery and other forms of corruption—and many of them are convicted felons. Some of them have been pardoned.

2009 Choice Resorts Mexico International, Inc. All rights reserved for the Foundation of a More Equitable Democracy.

A Half-Century without Papa