With the calendar turning yet again from December to January, it is an appropriate time to consider the derivation of our word for the new month. Why January?

In ancient Roman religion and mythology, Janus was the god of beginnings and transitions. He was often portrayed as a two-faced deity since he looks backward to the past and forward to the future. He ushers out and ushers in. Janus naturally came to be associated with gates, doors, doorways, beginnings and endings, and even time itself. 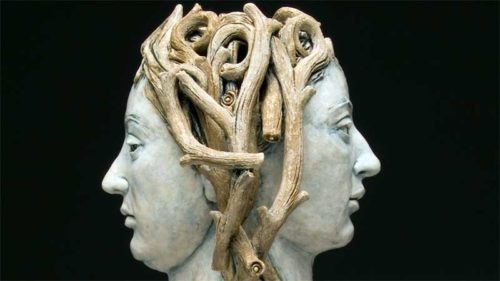 It is not much of a stretch to surmise that a wide variety of creators, literary artists among them, took inspiration from this unique and fascinating deity: he served dual functions and they were antithetical. Here was a divinity that was, in a sense, his own twin.

The concept of the fictional doppelganger may naturally follow (just as the developing field of psychology gave us the notion of the alter ego). A doppelganger—German for “double walker”—is a paranormal double, or twin, of a living person. And he is almost always diametrically opposed to the actual person in character and temperament. Specifically, he is bad where the living person is good. He is an evil twin, a sort of dangerous and malicious caricature of the primarily respectable and wholesome protagonist.

By far the most celebrated and well-known example of this theme occurs in Robert Louis Stevenson’s Dr. Jekyll and Mr. Hyde. In fact, so far-reaching has been its fame and influence on the popular imagination that most would not even be able to think of another instance of the motif in all of literature. But that is far from the actual case. Other notable examples abound, and some in works more highly praised by critics than even Stevenson’s acknowledged classic.

Fyodor Dostoevsky’s The Double: A St. Petersburg Poem may be the prime alternative example. This long short story (often termed a novella) is a staple of Russian literature and has been judged by novelist Vladimir Nabokov the most successful of Dostoevsky’s artistic works. Edgar Allan Poe’s short story “William Wilson” is another, and Poe called it his “best effort” in a letter to Washington Irving. Further, novelist Thomas Mann said that in no respect did the later Dostoevsky tale improve upon this little-known Poe work.

A twist on the theme is featured in The Picture of Dorian Gray by Oscar Wilde. Here it is an increasingly grisly portrait of the protagonist that becomes the representation of the youthful and ageless Dorian, his descent into immorality and vice affecting not his own actual appearance but an artist’s rendering which serves as his “double.”

The theme has continued to be of fascination to many later writers, among them Philip Roth, in his novel Operation Shylock, and Stephen King, in his book The Dark Half.

So, what does all this have to do with a simple flip of a calendar page? Well, maybe not too much—save for your developing interest in word origins and time-tested literary themes.

But be careful. When you make that New Year’s resolution, be absolutely certain it is made by you—and not your malevolent evil twin.

Self-publishing: What Type of Books?

Joyce White Dec 14, 2018 3
Even if you’re upset, you can choose to create an attitude that will free you in some way
Publishing