How an old booze-hound was driven by emotional storms around a dry country; and how he thence made a course toward the State Line, crossing to a liquid oasis in a desert land; and the strange things that befell; and in what manner the Ancient Panhandler came back to his own country and countrymen; telling his tale and astounding a Tavern Fellow at the entrance of a public house.

An Ancient Panhandler meeteth three Tavern Fellows bidden to an alehouse, and detaineth one.

It is an ancient panhandler,
And he stoppeth one of three,
‘By thy long beard and smell most foul
Now wherefore stopp’st thou me?’

‘The tavern’s doors are opened wide,
And I am much of thirst;
My chums are met, the glasses set,
To tarry were the worst!’

He holds him with his skinny hand,
“There was a state…” quoth he.
‘Hold off! Unhand me, grey-beard loon!’
Eftsoons his hand drop’t he. 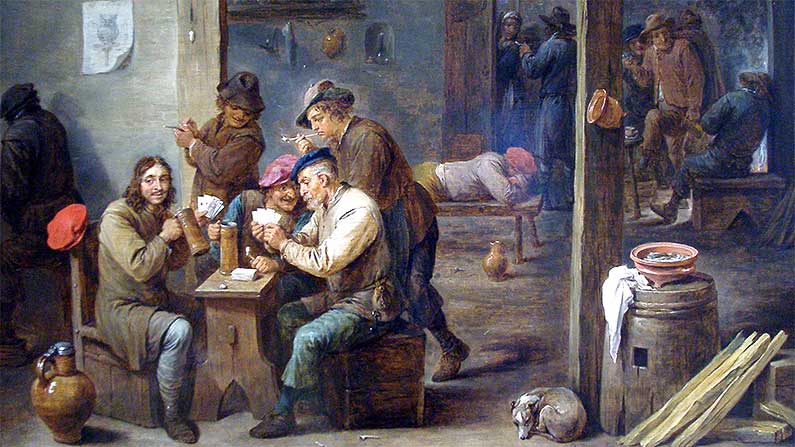 The Fellow is annoyed, but fascinated by the manner of the almsman, and constrained to hear his tale.

He holds him with his pitiful eyes,
The gallant chap stood still,
And listened like a three-years child:
The beggar hath his will.

“There is a state, across the Line,
Called Utah; have you heard?
Where alcohol’s anathema
To man and fish and bird.”

“A horrid place!  As dry as bone
To drinker with a yen.
I searched the area for years—
But never will again!”

“From cold-froze Logan, Ogden’s chill,
To St. George in the south,
To Salt Lake City’s withering drought,
No liquor passed my mouth.”

The mendicant tells how he traversed the state before finally crossing the Line.

The wastrel’s tribulations recounted, before crossing the State Line to Nevada.

“At length did cross a cultish man,
Thorough the fog he came;
As if had been a true Christian soul,
I hailed him in God’s name.”

And lo!  A great hope, in the form of Man, came through the snow-fog, and was received with great joy and hospitality.

“He offered buy me bev’rages
Of wide variety;
But soon I saw that ev’ry one
Had no more kick than tea!”

‘Try cola, soda, coffee, juice.’
“The naïf clutched his creed.”
‘Or Orange Crush, or Gatorade’—
“Nor sensed my dire need.”

The visitor proves a “bird” of ill omen.

“And as the list of quaffables
Stretched across a sea,
My temper flared, my fists were bared,
And I did cease to see.”

“Blind fury held me in her grip—
No thought for human lives;
And I did kill that Mormon man—
And all his thirteen wives!”

The Ancient Panhandler inhospitably—but understandably—killeth the impious man of bad omen and his entire “wedding party.”

The Tavern Fellow is aghast.

‘I fear thee, Ancient Panhandler!
I fear thy outstretched hand!
And thou art long, and lank, and brown,
As is the desert sand.’

“Fear not, fear not, my kindred chap,
I only wish the means
To purchase enough booze, my friend,
To drown all the Marines.”

“All I ask is capital,
Cold cash of the realm;
To steer my course on a liquid ship,
I, Captain at the helm!”

“To sail through seas of bourbon,
Scotch, rye, gin, and rum;
To marinate my bone-dry pate,
With their total sum!”

The Tavern Fellow is much amazed, and bent toward assisting the Ancient Panhandler expiate his desiccated condition.

The Tavern Fellow determines to lift the damnable curse from the Ancient Panhandler, even at his own personal financial expense, as well as the expense of his own Daemon-Spirits.

‘Let whiskey wash away thy pain,
I’ll brave my fellows’ scorn’—
And a sadder but a sober man,
He rose the morrow morn.