The Deadliest Flu in History (7)

Lewis began something unique – beef peptone broth with blood added.  Next, to grow cultures of the pathogens, which were isolated cases.

In addition, he prepared a pathogen for B. Influenza, type one and two, including pneumococcal and hemolytic Streptococcus.  After preparing extremely small amounts of his serum, he gave his cure to sixty people.  To his delight, only three developed pneumonia and no one died; eventually the control group had ten cases of pneumonia and no one else perished.

His lab, small, but still feeling he had something which may help so he called in the largest lab, the Department of Health.  The process took three weeks and during this time Lewis began to work on yet another serum, he thought, he would cure this disease.  A serum would target only one organism and Lewis thought Pfeiffer had discovered the bacillus B. influenza and Lewis believed it had to be this disease.

Scientists were frustrated as they continued to watch this deadly virus spread throughout the world.  More people were missing work, school, and officials were closing all forms of entertainment.  Now, large businesses closed since the majority of those workers were sick or dying. 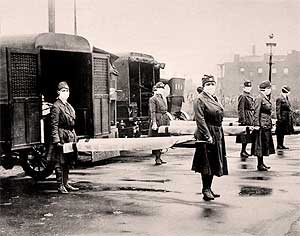 If you recall “Welch” observed the dead by autopsies at Camp Devon and was so alarmed he walked out of the room and told his friends, “I have to make three calls.”  Those calls went to Gorgas’s office at Harvard, requesting he perform more autopsies.  Another call went to Rockefeller Institute, and the third to Oswald Avery.

When Welch talked with Avery who was working at the Department of Public Health in NYC, he pleaded Avery take the very next train from N.Y. to Deven.  He realized if anyone could examine the dead and identify the pathogen, it would be Avery.  Welsh believed if anyone thought the chemistry and metabolism of the bacteria interesting, it would be Avery.

Avery began immediately never finding one test to contain Gram-negative bacteria.  He thought he was testing soldiers, known to drink, but each soldier proved negative regarding alcohol; instead they were filled with water.  When Avery replaced the water with alcohol all the samples returned with a Gram-Negative bacteria.

Now Avery’s work had begun, first with the dead who maintained a warmer body temperature, he believed the tests would prove to be more accurate.  During each of the autopsies he looked for the organism responsible.  Avery worked alone, surrounded by dead soldiers.  He knew the slides would show several pathogens, all could kill someone but which one were entering camps, cities, and wiping out the people.  Avery, as Park and Lewis, began to find what Pfeiffer’s discovered – the bacillus was in 22 of 30 men.

While Avery was at Deven, Welch; from Harvard, said to Avery, “Every case showed the influenza bacillus, in many instances pure cultures from one or more lobes of the lung.”  He discovered the upper lobe to be in recent stages.  An investigator picked up the news and wrote in science, “The cause is believed to be the bacillus Pfeiffer.”

On September 27th a notice made it to the Surgeon General from Deven, “It is established that the influenza at Camp Deven is caused by the bacillus Pfeiffer.”  The notice came from Welch, Cole, and Victor Vaughn.

If you notice Avery’s name did not appear on the notice, his own findings did not spell out the word established or caused.  He only recalled the seven autopsies, proved to be, cause unknown.

Avery returned to New York and went to work, hardly taking time to eat or sleep, working on one experiment after another.  Avery, unlike the other scientists, he wanted to work alone and never wanted to be disturbed.  If a young scientist or investigator worked under him they learned the ropes and became admirers of this man and his work.  Some of the young workers believed Avery was incapable of relating at a normal level, he found it difficult to be social.  One would name him The Hunter; he thought Avery was the picture of a man or woman sitting quietly waiting for his prey.  No one could rush this scientist, he told those who worked under him, “Disappointment is my daily bread.  I thrive on it.”

Orders were received from Washington D.C. on October 3rd for all personnel working on the anti pneumococcal vaccine to report to San Francisco.  Avery and Cole, if you recall, worked on, and tested the vaccine and found some success, but Avery was not satisfied at the success he had at Camp Upton.  To Avery it was the test of all scientists, rushing to grow Pfeiffer’s in their laboratories.

Avery continued to monitor the country, and he learned in Iowa at Camp Dodge, only 9.6% of 100% had Pfeiffer’s bacillus and only six (6) of one-hundred and ninety eight (198) autopsies.  This proved the rush to service those in San Francisco was not going to prove anything.

What would sound rather opposite to the normal man, or investigator, Avery thought the inability to find the bacillus was because it was not present or due to incompetence.  Avery learned during his research pneumococcal inhibited the growth of Pfeiffer’s so he wanted to stop the growth of pneumococcal by adding a chemical, sodium oleate, it would block pneumococcal from his experiments.

Avery published he report in JAMA; it read in part, “It is possible that technical difficulties in the isolation and growth of this microorganism may be in part responsible for the discordant results obtained at laboratories.  The use of this medium has led to an increase in positive findings of B. influenza in actual cases of the disease and in convalescents.”

We have learned the names of the best Scientists who kept failing, but still investigating with different techniques.  Researchers were uncertain and believed this was a virus which causes influenza.  The scientists were aware, death was all around them, and they were even a large target.  Investigators for the illness, searching for the cause, traveled from one lab to another, rubbing elbows with one expert, and leaning over the white coat of the next.  Researchers tried to produce something, anything different but they knew nothing has produced a thing for those dead.

As scientists rushed to find the bacteria people around the world continued to die.  Even the best could not find the right answer.