This Conan Doyle story has always fascinated me. Hound of the Baskervilles, Sign of the four, Lady on the bicycle and others have been done many times.

Yet this to my knowledge has only been done once, in all the Sherlock Holmes films and TV series.
The story centres around a body found impaled to a beam, with a harpoon through the chest. The only clue being a man’s handkerchief with the initials B.P. on the floor nearby. Holmes deduced that for a man to do this to a human body, he needed to have intense hatred as the the body would absorb so much pressure. 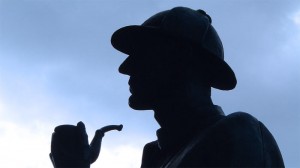 In my opinion the main reasons for not showing it are that Conan Doyle was unable to link the death to a character, it was always assumed, yet not proven. The killer was a harpooner on a whaling vessel, for the strength needed to drive the harpoon that deep. Also this was one case Holmes could not solve.

A close relation to this story was the infamous “Black Dahlia” murder in Los Angeles, in Jan 1947. When the body of starlet Elizabeth short was found cut in half and dumped in two places in a car lot. To do this to a human body, insinuates an intense hatred for the person. The “Ripper” murders in Whitechapel, were not as severe as this, although badly mutilated the “Ripper” bodies were still in tact. Possibly the work of a doctor or surgeon, as he had to quick and know what to look for.

Elizabeth’s body was cut, not hacked to death. So this was no fit of mad jealousy. Whoever did this had a very troubled mind and yet was so determined to go through with the job.