Gene Autry, famous singing cowboy star of radio, television and the movies (and very successful and lucrative recorder of “Rudolph the Red-Nosed Reindeer”), maybe the last name one thinks of when imagining adventurers of the sci-fi pulp era

But the 1935 Saturday matinee serial, The Phantom Empire, one of Autry’s first forays into film, depicts him as exactly that. Starring as himself and singing in almost every one of the serial’s twelve episodes, Autry, and his sidekicks fight evil of a futuristic, subterranean and very low-budget kind. 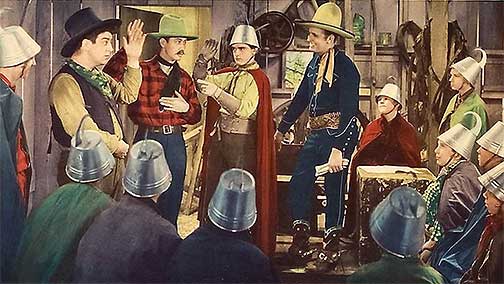 Featuring: The Scientific City of Murania
The opening credits for each episode identify Autry as “Radio’s Singing Cowboy.” Young costar Frankie Darro is listed next and would later portray Robbie the Robot in the classic sci-fi movie, Forbidden Planet (1956). Even younger fourteen-year-old costar Betsy Ross-King is described as “World Champion Trick Horse Rider,” which, apparently, she once was although you’ll be hard-pressed to find any information about her, googling or otherwise.

And finally, in the first few episodes, the “Scientific City of Murania” is also credited as if it, too, was a character in the story. Constructed as a miniature set, Murania hosted futuristic-looking buildings, painted backdrops, and flashing lights. Giant elevators ascend and descend to and from the surface accompanied by a funny un-theremin-like whistling sound. Scientific indeed.

Inhabited by citizens dressed in Roman-style togas and pointy hats, Murania also boasts giant robot servants who swing hammers and open doors a lot. As an interesting sidebar, these ridiculous looking mechanical men were taken out of storage from the set of the 1933 Clark Gable/Joan Crawford musical, Dancing Lady. Which begs the question: Could Dancing Lady also be an early and influential work of science fiction cinema?

The two kids have formed a club called “The Junior Thunder Riders” (complete with clubhouse and secret periscope). The members wear capes and what look like buckets on their heads as they ride around on horses giving voice to their motto, “To the Rescue!”

Autry and his backup musicians must perform their live radio recordings every day at 2 PM or, according to their contract, will lose the ranch. Sounds like someone needed to negotiate a little harder on that point.

As a result, this insidious line item conveniently sets up several cliff-hangers revolving around whether Autry will make it back in time to perform. Of course, he always does, a lot of the time with the help of the ever-resourceful Junior Thunder Riders. And Radio Ranch is always saved. Or is it?

Evil Above and Below

A couple of crooked scientists and their gang discover that there are large deposits of radium buried underneath Radio Ranch. Their plot is, of course, to dig up the valuable mineral and spirit it away so they can get rich. In the meantime, in an absolutely amazing coincidence, Murania (once part of the lost civilization of Mu) and its technologically superior inhabitants also reside 20,000 feet under the surface of Autry’s ranch and is the source of the radium!

Danger and non-stop action (and singing) and a lot of running around ensue as both the scientists and Murania’s evil Queen Tika strive to either capture or kill Autry for various reasons, none of which make much sense but do advance the story, such as it is.

, along with other movie serials of that time, was made strictly for juveniles. If you can get past the cheesy acting, dialog, costumes, special effects and the very irritating high-pitched voice of Ms. Ross-King, it can be an enjoyable time-waster. Of course, as Gene Autry got more and more successful, he was laughing all the way to the bank, radium or not.

A Gift for Santa

Jack Eason Aug 29, 2012 0
A Claytons Review: Claytons is the brand name of a non-alcoholic, non-carbonated beverage coloured and packaged to…
Featured