The air in the terminal throbbed with the constancy of the background noise.

Thousands of travelers, some departing, some arriving, muttered and laughed, dragged over-packed cases and shuffled their feet on the wide concrete floors.  Pointless announcements, blurred and indistinct, echoed to the cavernous ceiling as the status of different flights was announced.

Marty glanced towards the departures board and looked with dismay at the red lettering that spelled out her flight details.  ‘Delayed’, typed bold, followed the numbers and she stared at it with a will of making it change. 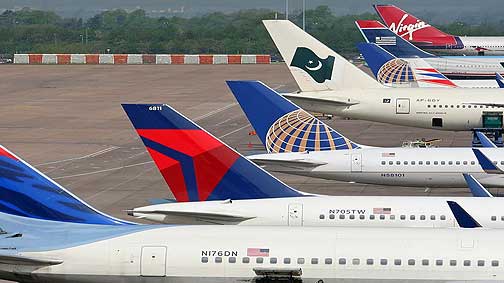 When boredom had finally taken its toll she rose and, for the twentieth time, started her aimless walking down the length of the terminal.  Magazines stared empty eyed at her from the news-stands, and none of the paperbacks on the rack caught her eye.  With a sigh, she continued walking until, out of boredom, she stepped into the small bar.

The bar was packed with mostly silent individuals and a few small knots of the terminally bored.  The bartender, a slightly built Hispanic man, smiled thinly as he approached her and took her drink order.  Moments later, she was sipping at her Long Island Iced Tea and wondering why she had even ordered it.

“I thought only losers and the desperate drank alone,” said a familiar voice behind her.  She turned and there he was, David, her ex, here of all places and at this, of all times.

“David, what are you doing here?” she asked, trying to mask her surprise.

“I’m going to Boston for a tradeshow.  And you?” she asked.

“Overseeing a system installation in New York,” he said.  “Mind if I sit?”

“Sure, sit down. I’m delayed so I have some time to kill.  Is your flight delayed as well?”

“Yeah, same east coast storm that’s stranding everyone,” he replied.  Looking down for a moment, his face took a pensive and sad cast. “So how have you been doing?”

Marty had been doing well, very well.  After the divorce, she had nothing to do but focus on her work.  It was her new family, her new friends, her new reason to get up in the morning.  She had been promoted more often in the past two years than she had been in the previous fifteen.  She wanted to say that to him.  She wanted to rub his face in it and blame him for her not having done it before, but she couldn’t.  Suddenly, now, face to face, the victories seemed a little emptier.  Instead of yelling her triumphs, she smiled and simply said, “I’m the department head of the marketing division now.”

She could tell from his expression that he actually meant it.

“What about you?  What are you doing now?” she asked.

“Well, pretty much the same.  Jeff retired and I took his spot.  That was pretty much a given, even before…” His voice trailed off.

‘Even before the divorce,’ she thought, finishing his sentence silently.

She thought back to the divorce.  She thought about the silence and the yelling, the long hours and the loneliness, the anger and the frustration.  Now it all seemed so distant, so muted, as if the issues that had meant so much at the time were pale and wane.  ‘Maybe time does heal all wounds,’ she thought.

As David spoke about the company, Marty realized she was still sitting with her overnight on her lap, her fingers tightly wrapped around the leather handle.  She leaned forward to drop it on the floor between her feet and caught the smell of him.  She hesitated, her face inches away from his chest.  She inhaled deeply the scent of him before catching herself and straightening up.  He was looking at her, his eyes full of remorse and sadness and, for a moment, she fluttered on the inside.

She knew that scent, his scent, a musky mixture with fruity overtones.  It was a smell that brought racing back a thousand unwanted and unbidden memories.  It was the smell of them sitting together on the couch.  It was the tang of sweaty sheets and panting bodies.  It was backyard barbecues and passing hugs.

Now here she was, inches away from his body, a body she knew so well, so intimately.  She had touched or kissed or licked every part of it.  She knew the parts that trembled and the parts that ached from old injuries.  She could remember lines and curves and shapes with as vivid clarity as she could remember the taste of his skin.  And yet, here she sat, inches away from this man she had known so desperately intimately and she could only treat him like a vague acquaintance.

“Ah, Marty, what the hell happened?” he asked.

“What do you mean?” she replied, the suddenness of his words breaking her remembrances.

She shook her head, stunned that he could ask such a question.  All the things that had sent them down that road bubbled to the surface.  Giving an obvious sigh of exasperation, she spoke. “Where do you want to start Dave?  Want to start with months of hardly speaking?  Want to start with you coming into the house like some sullen teenager and stomping downstairs to sit in front of that goddamn computer?”

“Jesus!  Ask a simple question and get the dragon lady response right away.  Isn’t that typical. I had almost forgotten,” he said.

“Forgotten what?  Forgotten how I lifted and cleaned and shifted and took care of everything while all you did was buy toys and play on the computer?  Is that what you forgot, Dave?” she snapped.

David sat back in his chair and closed his eyes.  “You know, forget it.  It doesn’t matter.”

“That’s typical, go silent.  You went silent when we were married as well.  I might as well have been living alone,” she said.

“Yeah, and I might as well have been living with my mother,” he replied.

Marty’s brow furrowed into deep ravines of anger.  “What the hell’s that supposed to mean?  Is that all I was to you?  Your mother?”

“Well, that’s how you acted, wasn’t it?” he replied

“I guess someone had to be the adult in that relationship,” she responded.  “Sure as hell wasn’t going to be you!”

“But I never wanted a mother,” he said, shaking his head.

“You know what we became, don’t you?” he interrupted.

Marty smiled a thin lipped smile and said, “No Dave.  You tell me, what did we become?”

“A friggin sitcom family, a stereotype of all that is wrong with the modern family.  The husband who is a moron, can hardly do anything.  The nasty mouthed wife who has nothing good to say, ever.  The more you treated me like a child, the less I saw you as a wife.  The more you gave me into shit for things, the more I retreated from you,” he answered.

“So it’s all my fault right?  Make me the bad guy so you can moan to your friends…”

“Yeah, we’re back to it being my fault again, aren’t we?” asked Marty.

“I did it.  I allowed it.  I wanted a lover, a wife, not a mother.  I moved out because my mothering days were over.  You started acting like my mother and godammit if I didn’t start acting like your child.  Do you know how many days and nights I cursed myself for doing that?”

“Probably not as many nights as I cursed you.  You say I treated you like a child.  Well, you treated me like a servant.  Someone to make meals and do the laundry,” she said.

“Then we both did it, didn’t we.  We stopped being partners, lovers, friends.  We relegated ourselves and each other into roles.  Roles neither of us wanted,” he said.

“Whenever we spoke – whenever you spoke – it was a complaint.  The people at work, your car, your job, your house, your clothes, you name it.  I can’t remember a single time that you just said something pleasant.  It was always a complaint.”

“Maybe I had a lot of things to complain about.  Maybe it would have been nice if I had a husband who actually listened to some of them.”

“We used to talk about everything.  We used to sit for hours, no TV, no radio, just each other.  We laughed and joked and smiled.  Then everything became hard for you.  Everything was a complaint.  Everything deserved and got your derision, including me.”

“I would listen to your litany of complaints and try to help.  That’s what I wanted to do, to help.  After a while, I realized you weren’t looking for solutions, you were just looking to complain.  Worst of all, after a while, most of the complaints were about me,” said David.

“And did you ever go out of your way to fix any of my complaints?  Did you ever make a concerted effort to help me, or did you just stumble off and ignore me?” she asked.

“I guess we forgot that we are both adults, both individuals, and both needful of so much more than we were given, or giving,” he offered.

Marty sighed and shook her head.  “What a life we created.  The quieter you became, the louder I became.  The more compliant you were, the more demanding I was.  The more motherly I became, the more of a child you acted like.  Worst of all, at the same time we were doing this role reversal, each of us needed the other to act the opposite way.”

Before David could respond, there was a sudden commotion as people rose and started to grab their belongings.  The departures board was changing and dozens of boarding calls were being announced.  Marty and David stood at the same time and found themselves closer than they had been in years.  Inches apart, she stared up into his eyes as he stared down at her.  A terrible sense of a route wrongly taken filled her and she found she had so much more to say.

She broke the silence softly. “Maybe one day we could meet again, as adults, as equals.”

David smiled and said, “I think we just did.”